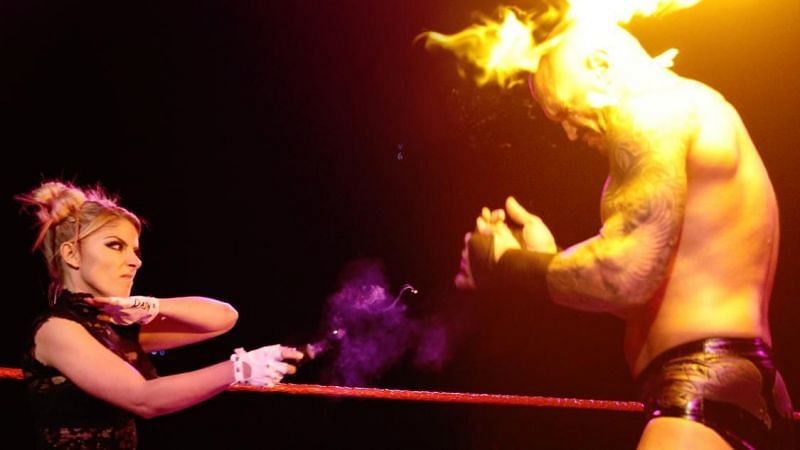 Randy Orton was blinded by Alexa Bliss with a flamethrower on this week’s episode of WWE RAW. WWE has now provided an update on The Viper’s condition.

WWE Digital revealed that Randy Orton has suffered minor burns to the face following the fireball attack by Alexa Bliss. The extent of the injury is still uncertain. There are no words on whether Randy Orton will feature in next week’s episode either.

What happened with Randy Orton on WWE RAW

In the wake of Drew McIntyre testing positive for COVID-19, Triple H made a return to WWE RAW and kicked off the show. However, he was interrupted by Randy Orton.

The Game confronted Orton about his actions from RAW Legends night, where he humiliated a number of WWE legends, including Ric Flair, Big Show, and Mark Henry. The Viper remain unperturbed and instead challenged Triple H for a ‘fight’ later that night.

The contest was scheduled for the main event of the night. Triple H came out first, but not in his usual ring gear. The two went at each other brutally from the beginning, having known each other better than most owing to all the years of history they share.

The lights started to soon, and when Triple H raised his trusted weapon, the sledgehammer high to attack Orton, he realized that it was on fire.

The lights went off, and when they came back on, Triple H was gone and Alexa Bliss was there. She chose ‘Pain’ for Orton with Anger on her face, and threw flames at The Viper’s eyes.

Randy Orton writhed in pain as RAW went off air.

One could assume it is Alexa Bliss’ revenge on Randy Orton for setting The Fiend on fire at WWE TLC. The next day at RAW, Alexa Bliss challenged Orton to set her on fire as well, but Orton did not oblige.