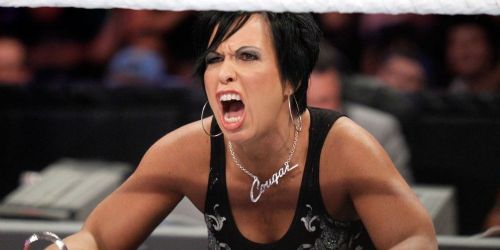 Former WWE personality and wife of late-great WWE Hall Of Famer Eddie Guerrero, Vickie Guerrero, recently did an interview with The Memorabilia Guy. You can check out the highlights here:

On being a heel:

“They all hated me; no one liked me back then (laughing). No, my Mom probably liked me. To be hated was something I wasn’t expecting. I look back and see how much hate I got from the fans, it was actually pretty thrilling for me. You know you have done your job well when people love to hate you. When the fans are face to face with me they say “Oh I love you, you’re so great” but on Twitter and the Internet they hate me. It’s fun to joke with them and give them a hard time.”

On why fans had such a great connection with Eddie Guerrero:

“I think the reason that Eddie has stayed with so many people after his passing is because he proved to the fans and everyone that he was a human being. He had faults, he also had demons, but he worked all by himself to get to the top of the roster. He was very true to his feelings and was honest with everyone, it showed so much character. Fans often approach me explaining that they went through similar issues Eddie went through and he helped them. He had so much character and dignity.”

On if she’ll ever return to WWE:

“I get that bug every once in awhile. I look in the ring and think – God I just want to be in there for one moment, one more time – so never say never. If Vince ever called and said “We need you again Guerrero” my answer would simply be – When? That adrenaline can only be found in the ring.”