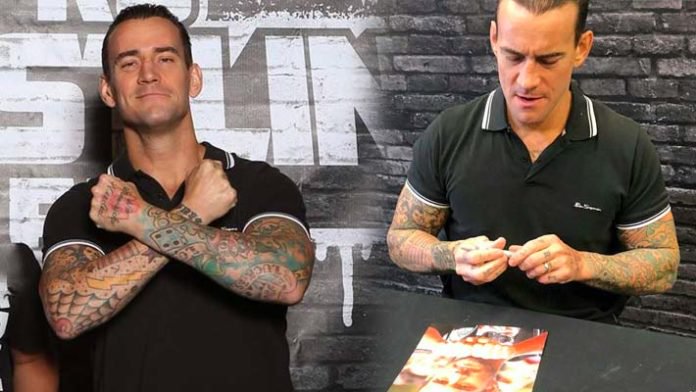 While CM Punk’s popularity may have decreased due to his recent issues with Colt Cabana, there is no denying that the former World Champion is still a draw.

This was proved once again during the recent meet & greet session hosted by Pro Wrestling Tees yesterday in order to promote the upcoming ALL IN event.

The tickets for the meet and greet had sold out in less than a minute and the additional tickets that were released afterward didn’t stay available for long either. Below are some photos and videos from the meet and greet session of Punk:

@CMPunk I’m a huge fan really nice meeting you today you have no idea how much of a impact you had on my life you are a god in my eyes and a legend I can’t wait to keep following your story where ever you go next pic.twitter.com/dWlVIOFZ8u

Had a great time at @PWTees for the @CMPunk event. Thanks for hanging in for such a long day. Now for some @Ricobenes! #skinnyfat pic.twitter.com/Bjhb5bBvYd

It’s worth mentioning that both Cody Rhodes and the Young Bucks have been teasing a Punk appearance for their upcoming show but at this point it not very likely to happen.

There is also speculation about his wife AJ Lee possibly returning to WWE for Evolution, but given the various issues with Punk and the recent lawsuit between him and WWE doctor Chris Amann, the possibility of it does not look to be very bright either.