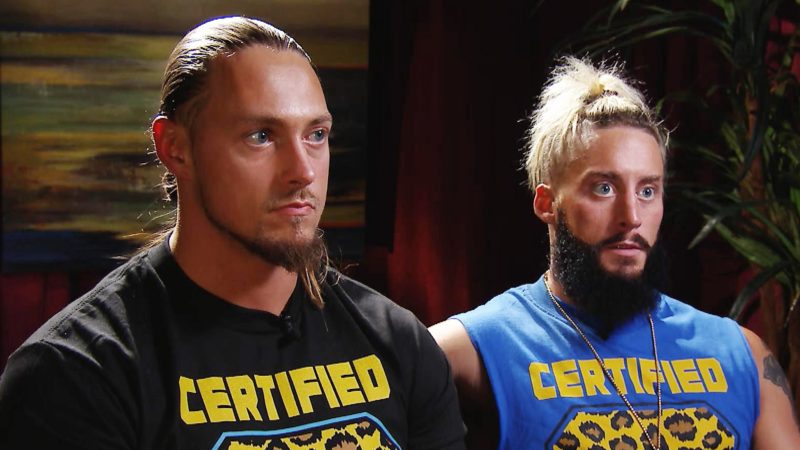 “No. So, we were at NXT TakeOver: Dallas and it was a very emotional night. We train with these guys. We weren’t even on the show, but we felt like we were part of the show because it’s a brotherhood down at the Performance Center. It’s all just a big family down there. It was emotional for us to see the show and to watch everybody go out there and light it up. We were leaving the venue and Triple said he wanted to talk to us. He brings me and Enzo into the room and, I don’t know if it’s on the video, but he congratulated us and I said, “Thank you very much” and then I realized, wait a second, we didn’t even perform tonight. So it was pretty weird to start off the conversation like that. It was a very emotional night and you felt like you were a part of it. I didn’t know what he was congratulating us for. Then he says you’re coming up to the main roster on Monday and then I realized that’s what he said congratulations for.

It was just a very surreal experience. I’ve been signed here for about five years when that conversation took place, so I’ve been working for that moment for five years. Me and Enzo, three years together, have been working at it to get to the main roster. So when we had that conversation with Triple H, it was very surreal and a lot of mixed emotions in that moment. But I’d say the most overwhelming emotion was joy. We were just so ecstatic about finally getting to debut on the main roster.”

You can check out the video of Triple H telling Big Cass and Enzo about their call-up here:

On his SummerSlam match against Chris Jericho and Kevin Owens:

“I’ve been to four SummerSlams all in that area. I was at SummerSlam ’97, ’98, 2002 and 2007. I was there as a fan wishing I could be a WWE superstar. Now I’m walking into Brooklyn, N.Y., as a WWE superstar in front of those fans. Right now, the excitement is indescribable, and I can’t even imagine what it’s going to be like on that evening going into SummerSlam in front of the hometown crowd, people I grew up with, friends and family against Kevin Owens and Chris Jericho with Enzo by my side. It’s a blessing to be able to do that on Aug. 21. It’s going to be amazing.”