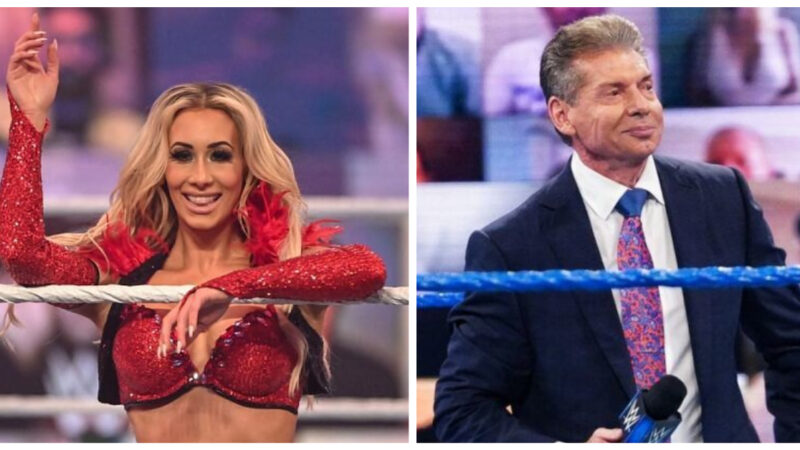 Vince McMahon rules everything and anything in WWE with an iron fist. Even though The Boss is almost 80yrs old, we must still abide by what he says until he decides to either sell the company or pass it down to his children. Vince has a certain way of doing things that many would disagree with, but it gets the job done for him. It looks like Vince McMahon was a key factor in a big change for Carmella’s career….Is Paige Leaving WWE For AEW?

Let’s take a ride back to 2017. The air is crisp, the people are roaming the streets, and we don’t have a virus to worry about. It was also a great year due to the all women’s Money In The Bank ladder match in which we saw Carmella win thanks partially to her then ‘partner’, James Ellsworth.

While the two were very over with the crowd and getting cheered, Vince McMahon thought it was best to really give them the kick in the butt to become full fledged heels. James Ellsworth recently spoke up on this as he said: “It worked. And what I mean by work is people, maybe your self included, think that they did that second Money in the Bank ladder match two weeks later on SmackDown because they got so much backlash – which is not true at all.”

Ellsworth continued: “They knew they were going to do the second one before we ever did the first. It was Vince’s idea, Vince goes, ‘We got to get some heat on Carmella and Ellsworth,’ because, at the house shows we were getting cheered – me and Carmella.”