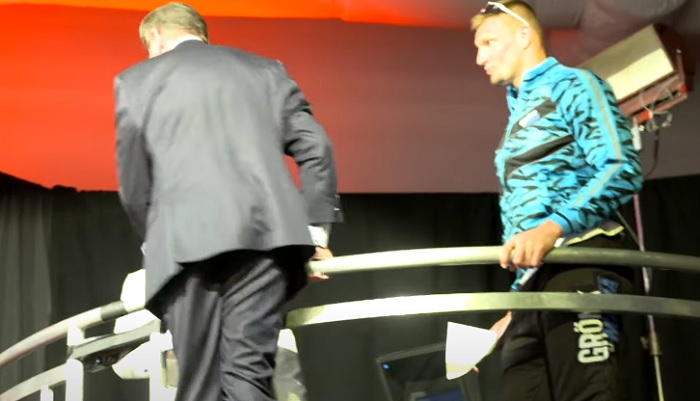 Vincent Kennedy McMahon has no fear.

That much will be made clear to anyone who watches the next installment of the popular original documentary series WWE 24 on the WWE Network this coming Sunday night.

On Friday, the official WWE YouTube channel released a special “WWE 24 Sneak Peek” video that features a behind-the-scenes look at the longtime WWE Chairman performing a wild stunt at the WWE Performance Center in Orlando, Florida.

McMahon, who turns 75 years of age next Monday, August 24, 2020, is featured in the sneak peek video demonstrating a stunt for NFL mega-star Rob Gronkowski ahead of his performance at the WrestleMania 36 two-night extravaganza from the empty arena inside the WWE Performance Center facility this past March.

The official description for the WWE 24 sneak peek video reads: “Vince McMahon himself steps in to show Rob Gronkowski how to properly perform his dive at WrestleMania 36 in this sneak peek at WWE 24: WrestleMania: The Show Must Go On, available to stream on demand on WWE Network.”

Watch Vince McMahon once again show the WWE Universe that he is a complete and total mad-man by checking out the special sneak peek clip below from the upcoming special dubbed “WWE 24: WrestleMania: The Show Must Go On,” which premieres on the WWE Network this Sunday immediately after the live WWE SummerSlam 2020 pay-per-view.