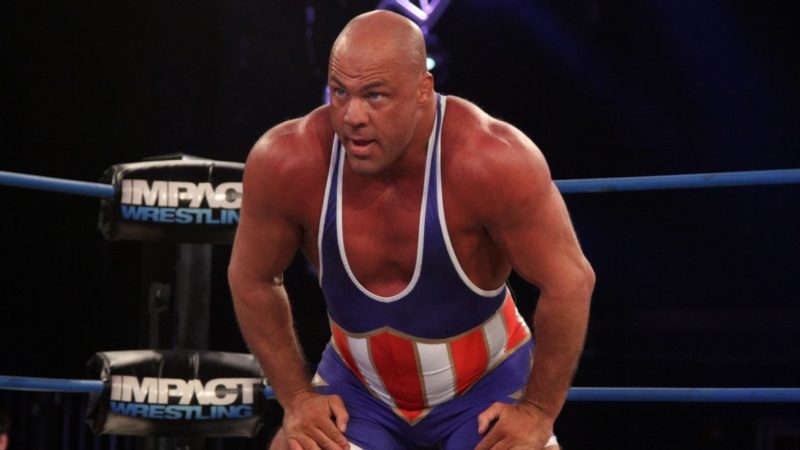 WWE Hall of Famer Kurt Angle was rumored to be making an appearance at this year’s Royal Rumble pay-per-view. Last- minute changes are quite normal in WWE and it turns out that canceled the plans of his return. He recently revealed on his Kurt Angle Show podcast that his planned three-week program in WWE was cancelled ahead of the WWE Royal Rumble event.

Kurt Angle opens up on the plans

Angle revealed on the Against All Odds 2007 episode of The Kurt Angle Show podcast that he was backstage at the Royal Rumble on Saturday 29th January at The Dome in St. Louis, Missouri. He divulged that his planned angle was canceled “last minute.”

‘The Olympic Gold Medalist’ did not confirm exactly what the program was going to be, but he did reveal on the show that he is not signed by the company.

“I want to make it clear that I’m not signed with the WWE. They weren’t going to sign me anyway, it was gonna be a three-week program that got cancelled.”

The show featured some high-profile matches, including Brock Lesnar vs. Bobby Lashley and Roman Reigns vs. Seth Rollins, apart from the men’s and women’s Rumble matches. Several Hall of Famer and legends made their presence felt at the event when they entered the Men’s and Women’s  Royal Rumble matches. WWE are officially on the Road to WrestleMania and they might be eyeing for some surprises for the fans. We will have to see if WWE plans to work out some ideas for Angle to make an appearance at WrestleMania 38.