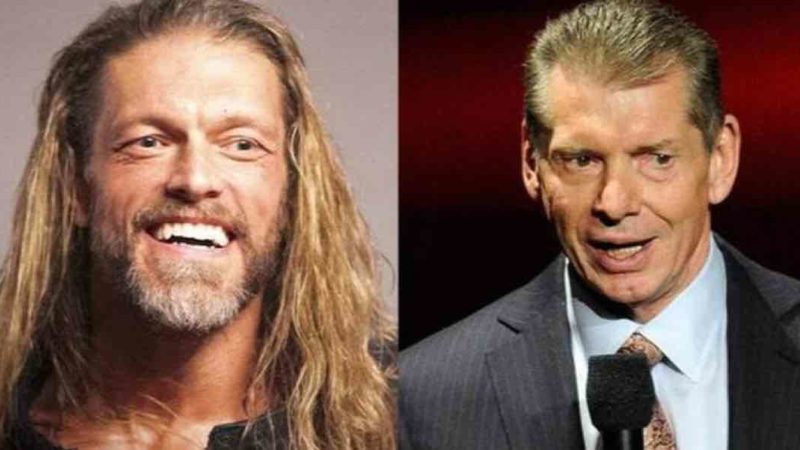 On the latest “Extreme Life of Matt Hardy” podcast, Matt Hardy gave some insight into his feud with Edge.

“I’m gonna give everyone a little sneak peek into Vince McMahon and his mind. He was worried there was going to be tension between myself and Edge, so he called us into his office and he was going to sit us down and talk to us and also let us know how he wanted the finish of this match to go specifically in detail. So we walked into the room, and we were getting along good at this time. You know, there were moments where there was some tension, obviously. But Vince was going to talk to us both and make sure to lay down the law so to say.”

“So I remember myself and Adam, we go and sit in there. There’s a couch across from Vince’s chair and we’re sitting on opposite ends of the couch. There’s probably four feet between us. We’re sitting and the first thing Vince says, he says, ‘Adam, Matt, you know the WWE is my company, right? You know that this event, SummerSlam, is my event that I created. Right? You know that I have rented this venue for the night so this is basically my arena. Do you understand that?’ We go, ‘Yes.’ He said, ‘You know that wrestling ring out there? That is my wrestling ring. Do you understand that?’ ‘Yes, we do.’ He said, ‘I’m going to tell you both this right now. If either one of you go out there tonight and try and take liberties with each other, if you try to intentionally hurt one another, I am the most powerful man in this industry. I promise you neither one of you will ever work a day in this industry again. Do you understand?’ We go ‘Yeah, sure. We understand it.’”

“He said, ‘Okay, with that being said, I want to get into the psychology behind this match tonight. So it’s not going to be a long match. I want to portray this as like an MMA fight. This is like a UFC fight. I don’t want to see any hokey wrestling bullsh*t. It’s going to be like a brawl, a fight, short and effective. Matt’s in here, he’s kicking the sh*t out of Adam. You’re a real piece of sh*t Adam, so Matt kicks your ass the whole match. Then you’ve got some spot, right? You’ve got something picked out where Edge hits a lucky move and then Matt hits the post, right? All of a sudden, Matt’s face is a crimson mask and he’s bleeding all over. That’s where you are able to take the advantage. Is that the spot you have?’ I said, ‘Yeah, that’s what we have’, and then we told him in detail what we were talking about doing.”

“Then he said, ‘I’m going to explain something to both of you right now. This is really what I want to see. This is basic psychology. This might sound crazy to you, but I have done many, many studies in the basic psychology of human beings and animals.’”

“He said, ‘Have you ever seen two animals in the Wild Kingdom when they’re going to fight one another? Have you ever seen one animal wound another animal? When it wounds that animal and the animal starts bleeding, and it smells the blood, it gets bigger. It swells up. It grows and it just wants to kill the other animal. Do you know what I’m talking about?’ He said, ‘Listen to me. These are your primal instincts. This might sound crazy, but when two animals, their primal instincts kick in and survival kicks in. It is their basic primal instincts and we all have them. We all have them even as human beings. If you see someone weaker than you, you see someone that’s crippled or in a wheelchair, deep down your primal instinct is you want to destroy them. You want to eat them. You want to eat them alive. That is what we do. That is what human beings do to one another. That is our basic primal instincts. When you look at a primal human being in the psychology behind it, that is our instincts. You want to take the person who’s weaker than you, that is below you in the food chain, and you want to fu*king eat them. Do you understand? That’s what I want to see out of this match.’ Adam and I now had got so freaked out from Vince’s monologue. We were sitting beside each other like, ‘What the f**k? ‘Yes, we understand. We will follow this to a tee. Thank you very much boss.’”

“As time ticked on down the road, myself and Adam, we think Vince brought us in there and he tried to freak us out to bond us, to give us something to talk about and we were on that page. Everything about that match was super professional. But Vince went crazy. He told us if you ever see a crippled person, or person in a wheelchair, you want to eat them. That’s the quote. He said, that is basic instincts, human psychology, us at our core. I swear to God, man, me and Adam have said many times since then, man, maybe he just did that to really try and give us something to talk about how fu**ing insane he was, and that was the psychology behind that to help bond us before that match. I’m sorry. I just had to share it because I just revisited it this week. That shows some of the genius and the insanity of Vincent Kennedy McMahon.”