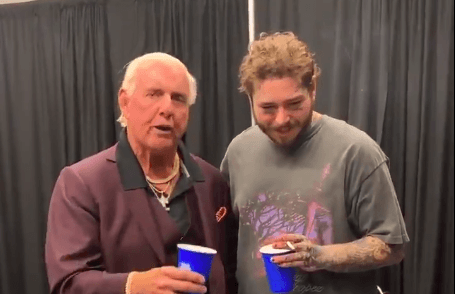 The world of wrestling and the characters that it has birthed has been tremendously influential to other branches of pop-culture. One of such iconic characters is the 16-time World Champion Nature Boy Ric Flair.

Flair and his rockstaresque lifestyle have been influential to the new wave of hip hop artists and rockstars that rule the world of music today. Last night, Flair got together with one of the biggest names in music today – Post Malone, for a couple of drinks.

Flair gave out a toast dedicated to Malone and all that he’s accomplished and thanked him for visiting him and his family after he’d gotten out of the hospital recently.

A lot many new hip hop artists including Malone have been very vocal about the Nature Boy’s influence on their lives. It is not surprising that Flair’s larger than life persona breaks through all barriers and reaches out to people from all walks of life even today.