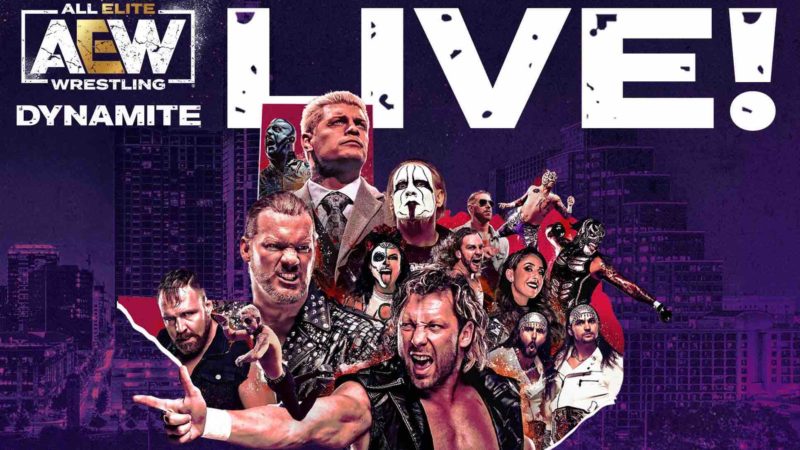 This is Part 2 of Matt Boone’s Dynamite results, including the announcement of WCW legend Juventud Guerrera vs. Chris Jericho next week:

We shoot to a message from The Purveyor of Violence, as Jon Moxley is shown pacing backstage.

Moxley talks about how he was at an airport and noticed polo players from other countries have made it to Japan but he hasn’t been able to get over there forever now.

He claims that as soon as he loses the IWGP U.S. Title it’s convenient that Hiroshi Tanahashi surfaces and now Archer is going to Japan to defend the title over there. Mox thinks maybe Tanahashi learned from Yuji Nagata and others to avoid him.

From there we shoot back inside Bojangles Coliseum in Charlotte, N.C. where the familiar sounds of Judas in My Mind plays as Fozzy’s own frontman comes out in his Painmaker attire and face paint.

“Le Champion” heads down to the ring and settles inside as the fans sing along with his theme. The music fades down and now out comes Nick Gage, complete with a bad ass ring introduction from “The Dapper Yapper” Justin Roberts.

After that, the theme for The Pinnacle leader MJF plays and he makes his way out with a big tub of popcorn and a cheesey smile on his face. He heads over to the commentary desk for special guest commentary for this No Rules Match.

The bell sounds and we’re off-and-running with our main event of the evening here at the annual AEW Fight For The Fallen special. Straight out of the gate, Gage swipes at the arm of Jericho with a pizza cutter, slicing it open in the process. Blood pours down the arm of Jericho.

Jericho knocks Gage out to the floor and rams him into the barricade. Now Gage is bleeding from the mouth and forehead. The action resumes in the ring where we see a big superplex and a Falcon Arrow from Gage for a near fall. Gage plays to the crowd a bit but then walks right into the Sharpshooter from Jericho.

Gage grabs the ropes but because this is a No Rules match that does nothing, so he eventually escapes and slides out to the floor. Jericho comes out after him but Gage rams Jericho face-first into the steel ring post. Now we see both he and Jericho looking under the ring for some foreign objects.

We see Gage pull out some light tubes, while Jericho pulls out Floyd the baseball bat. Both guys take their toys and head into the ring. Gage grabs a light tube and goes after Jericho but Jericho hits him in the gut with a baseball bat as the camera shows a close-up of Jericho’s face, which is now covered in blood as well after the ring post spot.

Gage avoids another shot from Jericho and then he pulls a pizza cutter out of his pocket. He plays to the fans a bit and then heads over to Jericho. He grabs his hair and saws at Jericho’s face with the pizza cutter. Jericho screams in pain and blood rushes out of his face. The crowd comes alive as the commentators take us to a mid-match, picture-in-picture commercial break as the action continues in the ring in this, our main event.

We’re back from the break and we see 100 chairs around the ring and light tubes, bats, etc. Gage has Jericho down and out and he unfolds and sets up two steel folding chairs. He then lays a giant pane of glass across them like a coffee table. He heads to the top rope but Jericho comes to life and stops him, before heading up to the top-rope after him.

Jericho hits a flying hurricanrana on Gage off the top and he goes smashing through the glass, which flies everywhere, even some fans are seen on camera in the background looking down around them. Jericho goes for the cover on Gage and he is an absolute bloody mess from every spot on his body — his arms, legs, face, head — you name it and it’s bleeding.

We see Jericho go for the Codebreaker on Gage but Gage slams him down on all the shards of glass from the pane. He then grabs a couple light tubes and starts smashing them over Jericho’s head and body. Jericho is now bleeding like a stuck pig from every spot on his body. Gage hits a piledriver on Jericho on the glass and goes for the cover but Jericho kicks out.

Gage has a big shard of the light tube which he uses as a shank, repeatedly stabbing Jericho in the face with it. He breaks another light tube and grabs a piece of it and stabs and scrapes at Jericho’s face and eyes with it as he screams in pain. Gage grabs a pair of bundled together light tubes and the fans explode. He heads in the ring with them and hoists one of them up in the air. He goes at Jericho with it but Jericho sprays mist in Gage’s eyes and grabs the other light tube bundle. He blasts it over Gage’s face and follows up with the Judas Effect for the pinfall victory.

After the match, MJF gets a mic and tells Jericho his labor no. 3 is going to be a match where the special stipulation is one that Jericho must win by performing a move off the top rope. He then talks about holding a grudge and shows a clip of Jericho mocking MJF with Juventud Guerrera references. Then MJF says “The Juice” Juventud Guerrera vs. Chris Jericho with the aforementioned stipulation will be his labor number three match on next week’s Homecoming. This week’s show goes off the air on that note. Thanks for joining us!