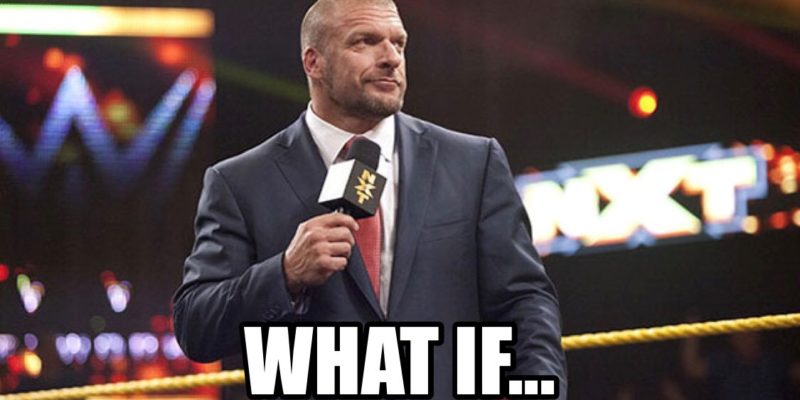 Good Evening wrestling fans and welcome to the fifth segment of What If? This is an article about the What If’s? Of course, WWE won’t give us what we want because our wants are not, “What is best for business”. So, we will make it “our business”. Without further ado, What If…Vince McMahon steps down as the Chairman of WWE?

It is a known fact that Vincent McMahon is the genius behind the biggest empire in wrestling history for more than three decades now. He inherited a relatively small company from his father and turned it into the billion-dollar empire it is today. Over the years, Mr. McMahon has focused more on the business standpoint of the company, thus affecting his talent and decision making. Multiple stories have been written about WWE Superstars upset with their character development and fans having wrestlers Mr. McMahon is high on forced down their throats.

Continuing to push superstars the fans cannot stand or holding back on amazing talent within the company, Vince has seemingly lost the praise of the dedicated fans in the past few years. But his genius is wearing out, as he seems to have lost touch with the WWE Universe. He might be 73 years old but still has 100% creative control of everything that happens on the main roster and will not turnover the industry he created without a fight.

While we all have our own view of Mr. McMahon, there is no doubt we are grateful for the outstanding entertainment we received over the years. However, with Mr. McMahon putting focus back on the XFL, we may see him step down in the next few years. If Vince does decide to focus solely on the XFL, we can expect a few changes within the WWE if the chairman retires from his backstage role.

Creative Control
The obvious first question is who would take over creative control? That would be none other than Triple H. It has been set up this way for some time now. Triple H is currently a creator and a very good one at that, as his work on NXT over the past few years has been amazing. He took the reins of NXT and revamped it into the developmental territory it is today. He not only made stars for the main roster but also brought world-class talents and gave them an opportunity to shine on the big stage. Regardless of how Triple H got where he is today, he is doing a fantastic job and once Vince is gone, he’ll definitely be the guy to take creative control. His work creating stars in NXT proves he is definitely the right guy to bring WWE to the next era.

NXT Invasion
With Triple H taking over creative control, we can all expect to see an NXT invasion on the main roster. Triple H would use the NXT brand to force Vince McMahon to step down. If you do a full fledge invasion angle with Triple H staging a hostile takeover you can really have the NXT stars and Triple H show their displeasure with the current course of the company and introduce Triple H as the leader of the new era.

The PG Rating to Be Dropped
The main reasoning behind WWE being watered down is limitations. The PG Era has also affected the violence level in the company and wrestling has become too soft. The PG Era has to go away and return to TV14 or TVMA. All WWE Entertainment feels childish and the wrestling coming across as unconvincing. This is especially true to the WWE fans who have been watching since the raunchy Attitude Era. Vince McMahon will never let go of the PG rating because of the current TV deals and targeting the younger audience, but how can you target a younger audience when WWE comes on so late across the east coast?

Part Timers No Longer Taking Up Main Event Spots
To have creative storylines, you cannot focus on part time wrestlers. Sure, the Big four events are good for a part timer to make an appearance, especially to Royal Rumble. Having the Universal Championship around the waist of a part timer is a not “what’s best for business”. The ratings are better when your champion is there every episode to continue the buildup of a storyline. Part timers take the spotlight away from current and rising superstars.

WWE Wrestlers making appearances for other promotions
The last major change could be working with other promotions. Chris Jericho has been giving us dream matches and seems to be working well with every wrestling organization. Just look at the booking on the Rock ‘N’ Wrestling Rager at sea. I believe we are about to see Brock Lesnar become the first dual brand champion between WWE and UFC. This could be a test platform for Vince to see how it goes. Why else would WWE continue to have Lesnar be the Universal Champion while making it publicly known he is going back to UFC? Having other wrestling organizations trade superstars from time to time would be huge for the companies. We can have matches we have all dreamed of. Chris Jericho knows this, Cody Rhodes knows this and Triple H knows this as well.

In conclusion, these are the five biggest changes I can see happening when Mr. McMahon steps down. Let me know foreseeable changes you predict for the future. Has Mr. McMahon been setting up Triple H to take control of the company or are Shane and Stephanie going to take over? I’d love to see your comments below and will respond and interact. Sorry I am late posting this episode of What If…I have been traveling a lot for the holidays. I hope you all had a great Thanksgiving.