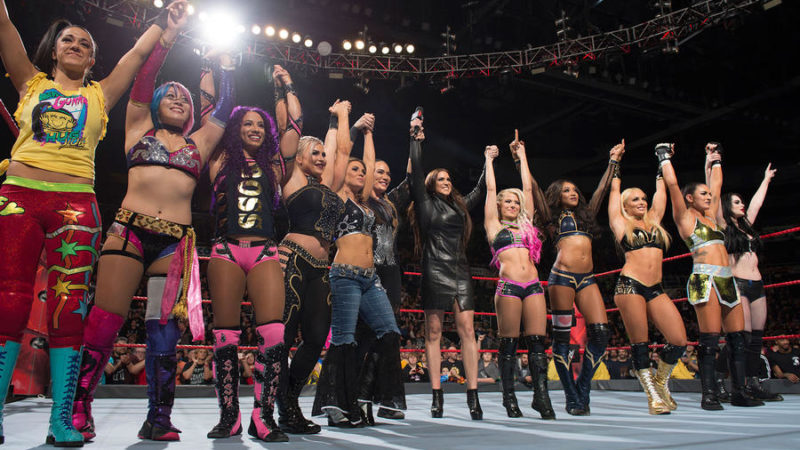 Good Evening wrestling fans and welcome to the third segment of What If? This is an article about the What If’s? Of course, WWE won’t give us what we want because our wants are not, “What is best for business”. So, we will make it “our business”. We all know WWE Evolution is this weekend and now is the best time to start a discussion on the Woman’s Division. Without further ado, What If…WWE used Evolution to set up two tournaments for the Woman’s Tag Team Championship and a Woman’s Intercontinental Championship?


I know my opinion does not matter but I am not too fond of the Diva’s division. (Correction Woman’s division) The issue I see is wrestling capability and underdeveloped storylines. I’m not taking anything away from the female talent. WWE has Charlotte Flair, Becky Lynch, Asuka, Emma Moon, Nikki Cross and a few others that are just simply amazing. The rest are mediocre at best. They botch, they hurt each other and sometimes just plain sloppy. I am hoping Evolution is amazing. It all retrospect it can be. However, Evolution has not had a decent build up. For an example, the matches have been changing. Just recently, it was announced that Alexa Bliss has been pulled due to an injury and replaced with Alicia Fox. It just seems to be a complete disaster before the start. With that said, Evolution should have been used as a total reboot of the Woman’s division.

Evolution should be used as the platform for introducing the Woman’s Tag Championships and a Woman’s Intercontinental title. Having the event be a tournament, can really set a new bar for the Woman’s Division and involve all the female talent from NXT as well. Having an NXT female make it far in the tournament could be huge. Nikki Cross would be a prime example to fight her way through the tournament and win the Woman’s Intercontinental Championship. Instead we are still stuck with three boring belts (NXT, RAW and Smackdown Woman’s Champion) with well over 30 female wrestlers and multiple tag teams.

For the Woman’s Tag Team Championship, they would compete at Evolution in a three round tournament to be crowned the Woman’s Tag Team Champions. The only issue is the current female tag teams. WWE would be a little short but if we combine RAW, Smackdown, NXT and a little mixing we have:
The Riott Squad
Alexa Bliss and Mickie James
Natalya and Nia Jax
Sasha Banks and Bayley
Alicia Fox and Dana Brooke
The IIconics
Sonya Deville and Mandy Rose
The Bellas
Lita and Trish
Ronda Rousey and Shayna Baszler
Jessamyn Duke and Marina Shafir
Tegan Nox and Dakota Kai
Asuka and Io Shirai (Triple Tails)
Lay-Cool (Layla and Michelle McCool)

If Evolution went this route, the ratings would improve and really open the door for the Woman’s division. I could see the Woman’s Division getting their own brand and show a few years down the road as well. Possibly introducing more Championships if more female talent is attained.

Let me know what you all think. Would you like to see the Woman’s Division take off? Is this a story line you would like to see? I’d love to see your comments below and will respond and interact. Thanks for all the great comments on the last post. I appreciate it.