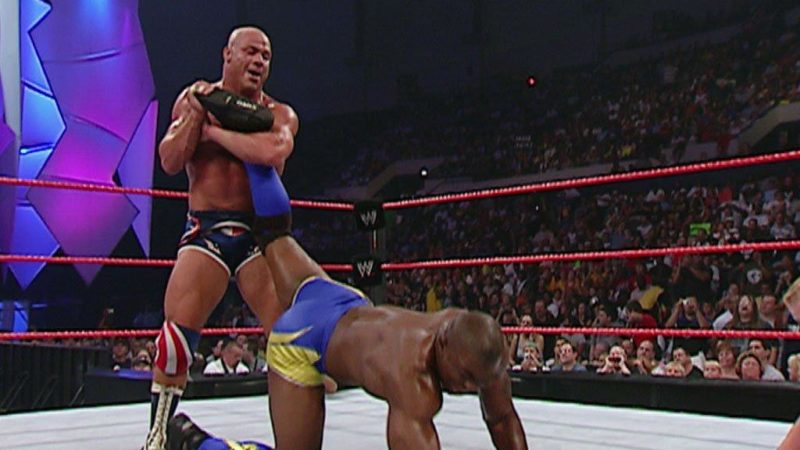 Kurt Angle revealed a few weeks ago that he was going to retire at WrestleMania. As for his opponent for the event, the Olympic Gold Medalist will reveal them tomorrow night on Monday Night Raw.

There are a lot of names that fans are tossing around at the moment. John Cena and Baron Corbin have been the front runners so far, with Corbin antagonizing Angle for half a year, while Angle was Cena’s first opponent on the main roster. It seems, though, that the Hall of Famer’s opponent may be a different man from his past.

Shelton Benjamin, along with Charlie Haas, backed up Angle as part of Team Angle in 2002. Benjamin went on to become a multi-time Intercontinental Champion and was regarded as one of the best pure wrestlers in the industry for quite some time. With Benjamin jumping to Monday Night Raw last week for a match against Seth Rollins, it wouldn’t be too shocking to see him challenge his former mentor at WrestleMania.

Well, that’s exactly what happened. While it wasn’t on Raw, Benjamin threw down the gauntlet on Instagram.

While Angle accepted Benjamin’s request, we could, and will most likely, see someone else inserted into the match on Raw tomorrow. Still, a one-on-one bout between Angle and Benjamin would be fun to watch, especially at WrestleMania.