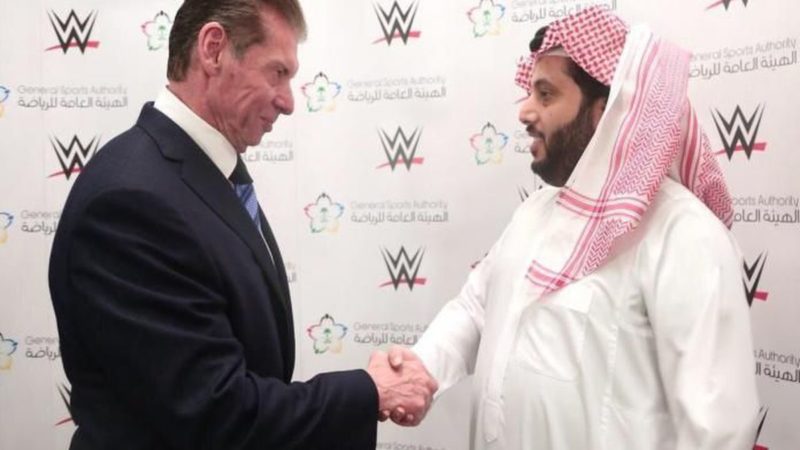 Vince McMahon has the last say in everything that goes on in WWE. Throughout the years, fans have speculated what would happen if WWE was sold by McMahon. According to Hugo Savinovich, Vince McMahon could sell the company to Saudi Arabia.

Assuming McMahon does want to sell the company, it is likely he will not be turning down a lucrative offer from a powerful country. Savinovich spoke to Wrestling Inc, where he discussed the possibility of WWE being sold. He said that McMahon would want $3 billion more for WWE compared to UFC.

“I believe there is more to the business transactions. I have said this on my Live that I would not doubt that if Vince was to sell his company, it would probably be for about $8 billion because UFC sold for $5 billion. I will not say that Saudi Arabia would not be in the run to do that. Plus, they wanna get that contract and I haven’t heard anything official that that has happened because of difference in figures between what Vince wants and what they wanna pay. But they need to have a better relationship and until this quiets down… they don’t need a scandal because they already have enough on their hands. Saudi Arabia is trying to look for its future and they know the future is not gonna be oil because the more we modernize, the more we’re gonna have other sources. Right now, the United States is a powerful nation and they don’t need to depend on Saudi Arabia or the Middle East for oil. I think this is powerful people – WWE and Saudi Arabia – and they have alliances.”

“I wanna make it clear – I am a Republican. I voted for Trump and I will vote for Trump. So, this is not a Democratic guy burying Trump. I get a lot of heat because I stand with Trump. I’m just going to tell you what I feel in my heart and this is a gigantic money deal in the future that we don’t know yet and they wanna make sure in the future Saudi Arabia, oil will not be the king of their money. It will be more of the touristic side and WWE is looking at the future there. So, they are already in the business. There will be, perhaps, billions of dollars to be made in the new future of Saudi Arabia which I believe is gonna be the tourist industry and exotic, crazy adventures that they will create for people around the world.”

Savinovich previously provided details regarding the time WWE Superstars were not allowed to leave Saudi Arabia last year. WWE signed a 10-year deal with Saudi Arabia and if they do not hold an event this year, they will be adding the missed date to their contract.