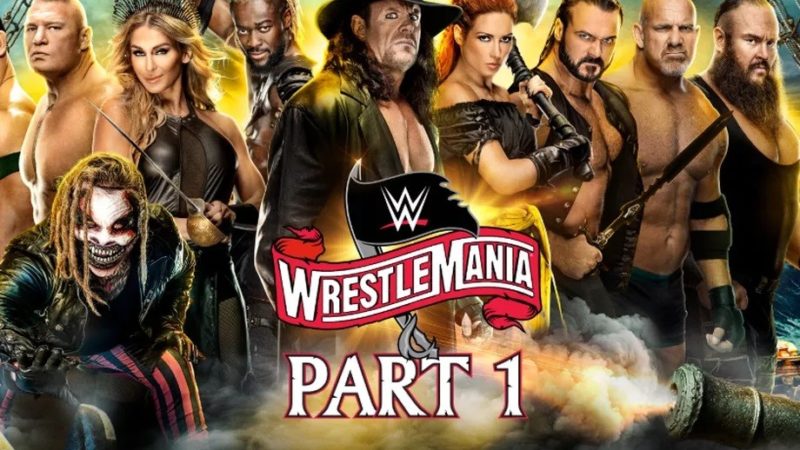 WWE WrestleMania 36 is roaring and ready to get started tonight (Saturday, April 4, 2020) from the Performance Center in Orlando, Florida at 6:00 pm ET. The show will air on WWE Network as well as on pay-per-view (PPV) if your cable provider is carrying the event.

WWE fans are given the opportunity to sit front row in their pajamas (the safest place to be during the corona virus pandemic) as our favorite Superstars go head to head in this unique two night Wrestlemania pay-per-view special event!

wrestling-edge.com will provide LIVE coverage of night one of WrestleMania 36 below, beginning with the first match of the evening and continue throughout the night with the most up to the minute coverage right on through to the main event.

The Wrestlemania 36 Pre-Show is available on FS1 and Fox Deportes via the Fox Sports Go app for free.

As always, the pre-show panel will be there to discuss the biggest matches of the night, provide background, analysis, predictions and more leading up to both shows.

WrestleMania 36 will stream on WWE Network and is available on pay-per-view. DirecTV and FITE TV are listing the price as $34.95 and $34.99 respectively for each night, and FITE is offering a two-night package for $59.99. That said, pricing varies depending on the cable or satellite provider. Both events will have one-hour Kickoff Shows that will start at 6pm ET and the main shows will start at 7pm ET. Tonight’s main card is listed for three hours on the WWE Network schedule page.

The following matches are advertised for WrestleMania 36, which will be broadcast today, Saturday, April 4, 2020 and tomorrow, Sunday, April 5, 2020. All of the matches were pre-recorded in Orlando, Florida at the WWE Performance Center and other various locations. WWE has yet to announce which matches will air on which night of the two part Wrestlemania 36 event.

-Brock Lesnar vs. Drew McIntyre for the WWE Championship.

-Goldberg vs. Braun Strowman for the WWE Universal Championship.

-Becky Lynch vs. Shayna Baszler for the Raw Women’s Championship.

-Rhea Ripley vs. Charlotte Flair for the NXT Women’s Championship.

-The Street Profits vs. Angel Garza and Austin Theory for the Raw Tag Titles.

-John Morrison vs. Kofi Kingston vs. Jimmy Uso in a Triple Threat ladder match or the Smackdown Tag Titles.

-Sami Zayn vs. Daniel Bryan for the Intercontinental Title.

-Bayley vs. Sasha Banks vs. Lacey Evans vs. Naomi vs. Tamina in a Fatal Five-Way elimination match for the Smackdown Women’s Championship.

-Asuka and Kairi Sane vs. Alexa Bliss and Nikki Cross for the WWE Women’s Tag Titles.

-John Cena vs. “The Fiend” Bray Wyatt in a Firefly Funhouse match.

-Edge vs. Randy Orton in a Last Man Standing match.

-Undertaker vs. AJ Styles in a Boneyard Match.

Join us here at wrestling-edge.com for full coverage and results LIVE beginning at 6:00 p.m. EST as we begin this two day Wrestlemania 36 adventure together from the safety of our homes!