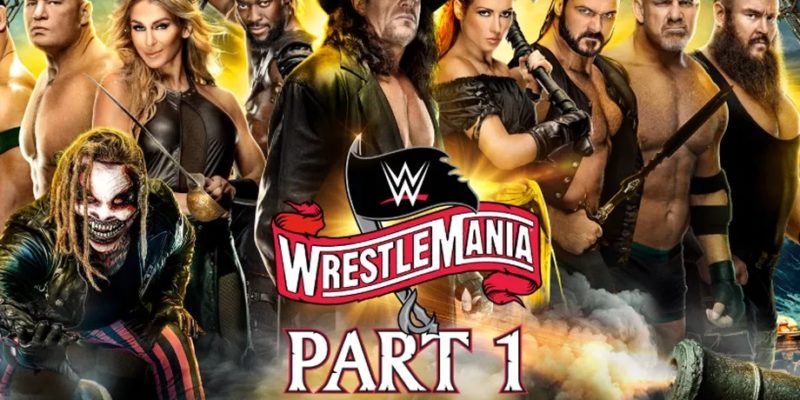 The biggest event, on The Grandest Stage of Them All in sports-entertainment, with the greatest WWE Superstars competing in the most important matches of their careers….

Rosenberg notes that Rob Gronkowski is hosting the show. Graves then points out that there are multiple title opportunities this weekend including the WWE Championship, the Universal Championship, and the Women’s WWE Tag-Team Championship all will be defended at Wrestlemania to name a few. A massive weekend ahead.

Graves states you don’t want to miss Night One of Wrestlemania, adding that Wrestlemania is free for new subscribers at WWENetwork.com. Graves notes there are other options for viewing such as the Fox Sports App, FoxSports.com, and for the first time ever FiteTV will be airing the event, and as always it is still available on pay-per-view (call local cable/satellite providers).

Graves then changes topics as he begins to go down the list of matches we will see during Wrestlemania including but not limited to, The Boneyard Match set to take place between The Undertaker and AJ Styles. Next Graves announces the Raw Women’s Championship Match between Shayna Baszler and Becky Lynch.

Next, for the Intercontinental Championship, a match between Sami Zayn and Daniel Bryan. Graves notes The Miz is out, so the Tag Team Championship is on the line in a Triple Threat Ladder Match 1-on-1-on-1 between Kofi Kingston, John Morrison, and Jimmy Uso. King Corbin will take on Elias once and for all, noting Elias’s medical condition is still in question after the brutal attack by King Corbin, ultimately knocking Elias off a balcony inside the Performance Center.

The Women’s Tag-Team Championship is on the line in a match between The Kabuki Warriors and Alexa Bliss & Nikki Cross. The reigning champion Goldberg will take on Roman Reigns’s replacement Braun Strowman for the Universal Championship. Kevin Owens and Seth Rollins go head-to-head to settle the score once and for all in this very personal match up.

Ending their back and forth banter over who would win tonight’s match up, Rosenberg states he is going with Kevin Owens whereas Graves believes Rollins will continue his Wrestlemania run of victories. With that we go to commercial break.

Graves and Rosenberg Discussion At The Podium

As we return from commercial break, Graves and Rosenberg discuss the WWE Women’s Tag Team Championship title match between the Kabuki Warriors and Alexa Bliss & Nikki Cross. Alexa Bliss is called the underdog in the match as a video clip is shown highlighting Bliss and Cross attempting to come into their own.

Next Graves and Rosenberg discuss the Universal Championship between Bill Goldberg and Braun Strowman tonight. The clock in the lower right hand of the screen shows 44 minutes until Wrestlemania starts. Rosenberg states that Strowman set the world on fire when he entered the WWE. Rosenberg notes the match where Strowman won with a kid named Nicholas in the ring as his partner. Then it is mentioned he won the Battle Royale last year.

As the Wrestlemania Kickoff Show comes to a close, Corey Graves announces it is time to get ready, Wrestlemania 36 (Part One) starts, NOW!