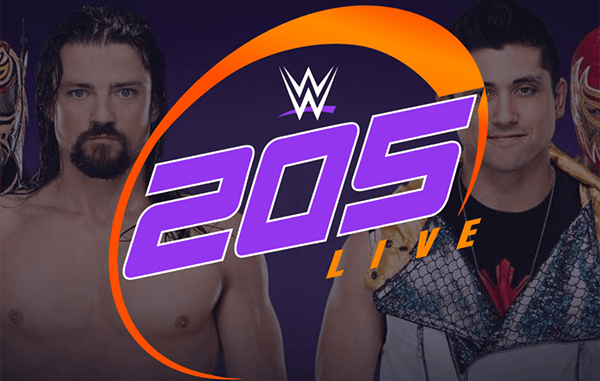 – We kickoff the show with a recap of the fatal 5-way that crowned Jack Gallagher as the new number one contender to Neville’s Cruiserweight Title.

– After the announce team discusses their Valentine’s Day, it’s time for our first match.

Good to see Swann back from injury as he takes on the smitten Dar who has Alicia Fooxxxx by his side. Dar’s disgust for Swann’s dance moves are fantastic. Before the match, Swann takes the mic and says tonight is special for two reasons. One his his return, and the other is Valentine’s Day. He is going to dedicate this match to Alicia, but says “she can’t handle this.”

They lock up and head to the corner as Dar cowers away and prays for the break. Reversals in the middle of the ring now as they grapple their way to the hearts of the crowd. Whip exchange leads to Swann’s trademark flip and beautiful drop kick. Dar heads out of the ring and Fox tends to her fallen beau. Dar returns to the ring and gets tripped up by a drop toe hold and kick to the back. Swann heads up top but Dar kicks him down and busts out a few moves of his own. The lefty lands a couple jabs and slows the pace. Butterfly Suplex from the Scotsman and Dar blows a kiss to his lady. Unique arm submission from Dar. After the release, a flurry of palm strikes and uppercuts from Dar momentarily stuns the former champ. Swann counters with a roundhouse kick and both men are up. House afire from Swann but Dar catches Swann’s kick and picks the ankle. Dar spills to the outside and uses Fox as a shield. Back in and Dar rolls Swann up and tries to use the ropes to aid the pin, but Swann kicks out anyway. Dar heads up top but Swann takes him down with a jumping rana. Swann scampers up top and hits a big Phoenix Splash for the win.

– We go backstage for an interview conducted by Corey Graves with TJ Perkins and Neville. The champ puts over Perkins as a great talent and champ of CWC, but not on his level. They go back and forth with not so great analogies. Perkins takes a shot at Neville’s run on RAW before the cruiserweights showed up. Neville says he will regret saying that and storms off.

– Video package for Gran Metalik, who debuts tonight. It takes a look at the CWC finals between he and Perkins and his plans for 205 Live.

Expect fireworks and my typing skills to be tested. Nice pop for Metalik’s entrance. Gulak goes straight for a running drop kick. Metalik gets out and goes for a springboard and slips. Gulak is a true pro and throws him down and continues the attack. Now the jitters are gone, Metalik’s aerial assault takes center stage but Gulak able to ground the high flyer. Wheel barrel arm drag from Metalik. Double springboard from Metalik, but met with a big boot from Gulak. He sends him out with a baseball slide and gets a near fall once back in. Gory Special from Gulak stretches out the Luchador. A couple forearms gets him out of a bad spot and he sends Gulak outside. Metalik climbs the ropes for a tope con hiro. He gets Gulak back in and delivers the Metalik Driver for the win.

– Backstage with Brian Kendrick and his “protege” Akira Tozawa. He cuts Tozawa off a couple times and puts a sales pitch on the mentor/protege thing. Tozawa says “NO” and Kendrick asks if he understands what he’s saying. Tozawa says in plain English “I understand. I don’t like you.”

Lock up in the middle of the ring and reversals abound. Perkins gets the first true take down. Head scissors take down and a pair of arm drags leads into an arm submission. Doesn’t take long for an “Austin Aries” chant, as mat skills don’t seem to be appreciated in Anaheim. Semi-clean break as Neville goes for a cheap shot but reversed into a hammerlock by TJP. Neville hits a straight right to regain advantage. Flying head scissors and springboard cross body from Perkins. Current champ sends former champ outside and the pace is deadened. Missle drop kick from Neville from the tope rope sends Perkins rolling away. Neville chokes out Perkins in the corner with his boot and Perkins slips outside for a quick breather. Neville joins him and drags him to the barricade where he sends Perkins face first in the barricade with a flap jack.

Neville with a chin lock and Perkins looks a bit sleepy. Perkins slips out and promptly gets sent back down with a scoop slam. Neville heads up top and misses a cross body. Perkins with a reversal and neck breaker. Neville goes outside to collect himself but Perkins hits a drop kick. Beautiful springboard DDT from Perkins. Neville regains control and hits an impressive deadlift sit out power bomb. We’ve come to blows in the middle of the ring. Neville reverses a detonation kick attempt, but Perkins hits a kick right to the champ’s ear. TJP up top and Neville joins him. Superplex not cleared for flight and Perkins sends him back down. Neville tries to wrap Perkins in his submission but TJP reverses into a cover for anear fall. The second time might be the charm. After a quick struggle, Perkins taps and Neville gets the win.

p After the match, Jack Gallagher makes an appearance and trots daintily to the ring. Neville with the quick attack and chucks William III down the ramp. A couple uppercuts and a headbutt send the champ scurrying as Gallagher poses with the title.