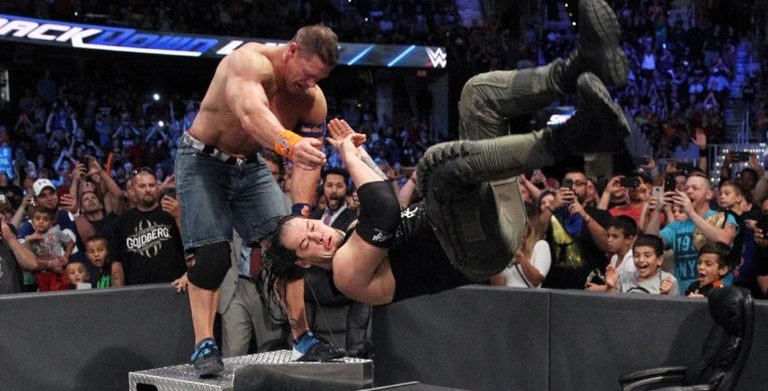 Many people were left surprised when Shinsuke Nakamura defeated John Cena clean during tonight’s episode of SmackDown, though it appears it wasn’t the original plan.

The story published on WWE.com about the match between Shinsuke Nakamura and Jinder Mahal reads that Baron Corbin interfered in the main event of SmackDown and accidentally cost John Cena the bout:

“The following week, The Leader of the Cenation squared off against The King of Strong Style in an intense showdown to see who would have the right to challenge The Modern-Day Maharaja for the WWE Title. With the two Superstars going toe-to-toe in the heart-stopping bout, Baron Corbin suddenly interfered. While The Lone Wolf seemed intent on handing Nakamura the defeat, his plan backfired, and he inadvertently helped his nemesis pick up an incredible victory over Cena.”

You can check out this story at this link as long as it’s online or unedited. Here is also a screenshot of the above-mentioned phrase:

This has led to speculations that the original plans for tonight’s match were for Baron Corbin to interfere in the match as mentioned on the site which would have kick started his feud with Cena.

Though the plans were apparently changed during or shortly before the show and Corbin ended up attacking Nakamura after SmackDown went off air. This further resulted in Cena brawling with Baron and putting him through a table to end the segment.

While we’ll never really know whether or not the finish of the match was changed in last minute, there is apparently no reason for WWE Staff to write such article without a plan and hence these rumours appear to be true.