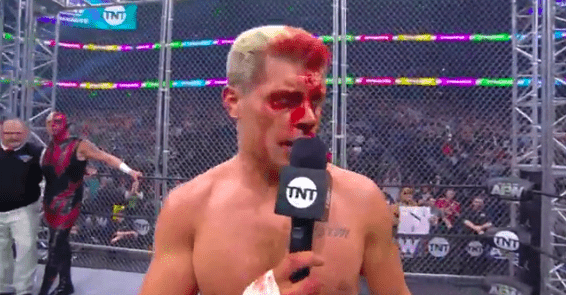 In the aftermath of this week’s edition of AEW: Dynamite, WWE Hall of Famer Bully Ray had some critical comments in regards to Cody Rhodes’ Moonsault from the first-ever Steel Cage Match in All Elite Wrestling history.

Rhodes defeated Wardlow by hitting a spectacular Moonsault from the top of the Steel Cage to get the pinfall win over the latter and despite Bully agreeing that the moment was ‘epic’, he felt that a spot as such should’ve been saved for the climax of Cody’s feud against MJF.

“Doing that moonsault last night was selfish, I’m bet on balls right. Because selfish, much like the word politicking in the wrestling business has a negative connotation. But it doesn’t have to. Selfish is good in wrestling, because sometimes you need to be selfish and selfish sometimes is patting yourself on your back and doing something for yourself that you want in your scrapbook for history.”

Following his win over Wardlow on Dynamite, Cody also addressed the crowd in Atalanta about the history of the Rhodes family in a city with such an immense amount of wrestling history. In the context of that, Bully believes that Cody pulled-off the Moonsault to create a moment for himself rather than add context to his on-going story.

“Atlanta, Dusty’s [Rhodes] town, now Cody’s town. I may never get to stand on top of a steel cage in Atlanta for the rest of my career. I don’t know what’s going to go down. So if this is my one and only chance to stand on top of that cage in a town with so much wrestling history; in a town that my family’s name is synonymous with? I’m doing it for myself.”

You can check out Bully Ray’s Busted Open Radio Podcast at this link.