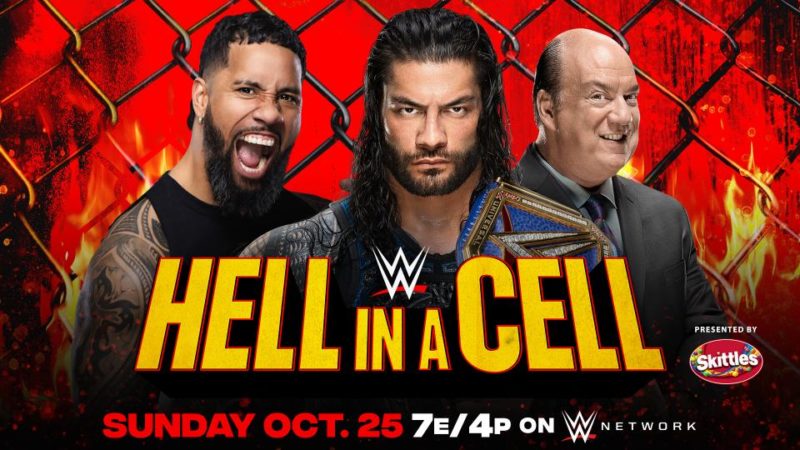 Welcome to Wrestling-Edge.com’s results for WWE Hell in a Cell 2020 featuring 3 cell-based matches!

Drew Gulak starts by talking to Little Jimmy, but gives him a cheap shot teaching him about “Stranger Danger.” R-Truth is enraged and begins attacking Gulak, dragging him around the ring until Gulak is able to find an opening to pick his leg. They have a balanced match but in the end it’s R-Truth who is able to get the win with a Jacknife Pin. Afterward Lucha House Party and Akira Tozawa comes down to the ring to chase R Truth for the 24/7 title. Drew Gulak even gets on the mic and declares that R-Truth’s childhood hero John Cena “Sucks.”

This is a surprising choice to open the show, as the emotional stakes in this match seem fit to be the main event. The two start passionately with dialogue though Roman is aggressive in his offense. Jey isn’t getting an opening and this allows Roman to take his time meticulously picking apart his cousin. Jey Uso finally fires up with attacks to the outside, using the cage and ring to his advantage. Roman is able to get early spears in, but doesn’t ask Jey to quit. Jey also manages to land a superkick and Splash but Roman remains battling.

Uso comes from below the ring with an extra long strap, whipping his cousin with it though Roman answers with a third spear.  The two have an impromptu strap match and despite Roman being strangled to the point of passing out he doesn’t quit. Roman is able to do likewise with a guillotine once he recovers but Jey also refuses to quit. As Jey refuses to quit Roman says that he can’t be held responsible for what he does to escalate it. Roman takes Jey to the Apron and continues to brutalize his head. The Ref tries to call it but Roman gets rid of the ref instead.

The Outside ref tries to come in and make a save but he instead goes to check on the original ref. When Roman tries to beat down Jey with the steps Jimmy runs in and chastises Roman who starts to cry over this. Jimmy even pulls out the real name while Roman says he doesn’t know who he is anymore. Roman lulls him into a sense of security when suddenly he grabs Jimmy in a guillotine which causes Jey to say he quits, ending the match with victory for Roman. After the match, Afa and Sika, the original Wild Samoans are standing on the ramp waiting for Roman to present him with a Lei blessing him as the Tribal Chief.

Elias performs a song that once again talks about Jeff Hardy and his prior substance abuse problem. Fairly early on they battle on the outside which almost results in a Count-out loss for Hardy. Hardy gets his footing once their back in the ring able to get constant offense in, though Elias survives a Whisper in the Wind. Hardy lands a Twist of Fate on Elias but as Hardy gets into the corner Elias escapes. He grabs his guitar, but Hardy takes it and hits him with it, earning a DQ.

Well, @JEFFHARDYBRAND just played his own tune across the back of @IAmEliasWWE … so Elias gets the DQ victory! #HIAC pic.twitter.com/VApCmwIrwg

Otis has the early advantage, using his superior size against Miz. Miz feints and tosses Otis to the outside but the deception doesn’t last. Miz manages to throw a sleeper onto Otis, but Otis powers out before eating a huge boot from Miz. Otis powers up, building momentum but when he goes for the caterpillar Morrison pulls Miz out of the ring. Morrison tries to hit Otis with the Money in the Bank Briefcase but he’s caught by the Ref and ejected.

Miz fights off Otis and when he kicks Otis off of him Tucker hits Otis with the briefcase knocking him out and allowing Miz to get the Pin. Miz is now the new Mr Money in the Bank and it seems Heavy Machinery is done. After the match backstage Charly asks Tucker why he did it which is that he’s tired of being overshadowed by Otis.

Before the cell can completely lower Sasha knocks the chair out from Bayley’s hand, sending it out of the cell. Sasha is intense in her offense, maintaining control of Bayley. Bayley tries to hit Sasha with a Kendo Stick but Sasha catches it and throws it out of the cell. The two fight over a table on the outside which gives way to an incredible Meteora into the side of the cell off the table. There are great sequences on the outside for both as they try to brutalize each other. Both Sasha and Bayley hit the steps hard and use kendo sticks onto one another between the steps and cage.

When the match gets back into the ring Bayley starts targeting the injured neck of Sasha. In the ring both use stationary chairs to their advantage. Bayley gets Sasha onto the apron and whacks her with a Kendo Stick. When she tries to duct tape a pair of sticks together it doesn’t seem to work and Bayley eats a face full of Fire Extinguisher. Bayley gets her special chair from the outside but Sasha throws it into the ring and brutalizes Bayley. Sasha tries to perform a frog splash but Bayley pulls a steel chair to protect herself.

Bayley sets up a ladder between two steel chairs and sets up Sasha, spray-painting an X on her but Sasha is able to get up and hit her with a Meteora and a Bayley to Bayley. Bayley survives and hits one of her own on Sasha but Sasha also endures. The champ tries to perform another with the chair but Sasha reverses it and locks in a Bank Statement with the chair making Bayley tap and becoming the NEW SmackDown Women’s Champion.

This match was made during the Kickoff Show and pits one member of Retribution vs one member of The Hurt Business. Slapjack tries to get some offense in early, and is able to endure Bobby Lashley but it only takes a quick Hurt Lock from Lashley to get the win. After the match the Rest of Retribution come to the ring and try to attack Lashley, bu tare run off by the rest of The Hurt Business.

Randy is hiding as a Camera Man and tries to attack Drew ahead of time. The two brawl all the way around the cell before entering it and starting the match proper. Drew is able to take orton and run him into every wall of the cage, even throwing the steel steps at him. Randy finally finds his way and is also brutal to Drew, stomping his head into the exposed steel steps. The match balances throughout, not quite having the same emotional connection or brutality of the prior matches tonight.

Drew puts Orton through a table on the outside but once the action returns to the ring Orton delivers a draping DDT though Drew kicks out at one. Randy produces bolt cutters and cuts through the door chain. As Orton tries to leave the Tundherdome McIntyre runs out of the ring and attacks Orton. Orton starts climbing the cell making his way to the top, taunting Drew to follow him. Drew follows and apparently Orton had a hidden pipe up there to wield as a weapon which he uses to attack Drew’s leg.

McIntyre and Orton fight midway down the cage, causing McIntyre to fall through the announce desk. It looks like Drew may have busted through his lower lip and is bleeding as he crawls back to the ring. Dew is able to counter an RKO with a Claymore and Orton rolls out of the ring causing Drew to exhaust himself to drag him back in. Orton is able to dodge a final Claymore and land an RKO on Drew to become the NEW WWE Champion.