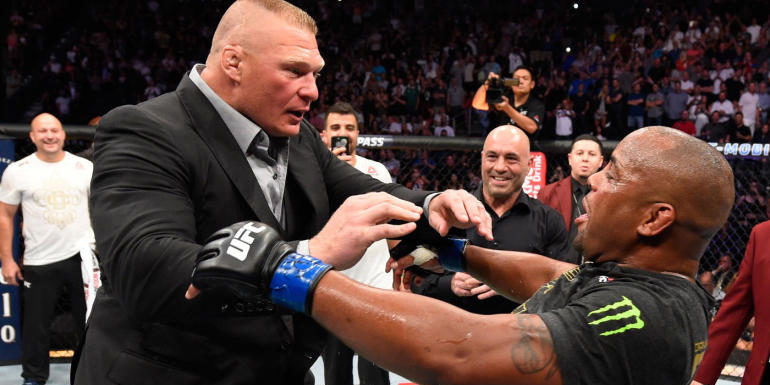 Brock Lesnar is back in the UFC with a bang. The Universal Champion made his presence felt when he got into a physical interaction with the newly crowned UFC Heavyweight Champion Daniel Cormier. Now, the WWE has released an official statement about Lesnar’s return to the UFC.

WWE raised a question about Lesnar’s future with them and addressed the contract complications between the two parties. Here’s the official statement that WWE posted on wwe.com:

We don’t know who the next challenger for Brock Lesnar’s Universal Championship will be, but we do know his upcoming opponent — UFC Heavyweight Champion Daniel Cormier.

After Cormier knocked Miocic out in the first round to become both the UFC Light Heavyweight Champion and UFC Heavyweight Champion, he called out Lesnar and invited him into the octagon. Brock immediately shoved the new champ across the cage before delivering a profanity-laden tirade on the microphone.

Later in the night, during the post-show press conference, UFC President Dana White confirmed that Cormier vs. Lesnar would be happening in the future. He added that no date had been set.

Speculation has run rampant over Lesnar’s future for much of this year, starting with Lesnar posing for photos next to White on the night of WWE Elimination Chamber 2018. Lesnar last competed in UFC in July 2016.

Weeks ago, Lesnar’s advocate Paul Heyman revealed that The Beast’s next Universal Title defense was facing contractual issues due to a lack of confidence in WWE to find a suitable challenger. Lesnar last appeared on WWE TV at the Greatest Royal Rumble on April 27, where he retained the Universal Championship against Roman Reigns.

Stay tuned to WWE.com for any updates on Lesnar’s WWE contract.