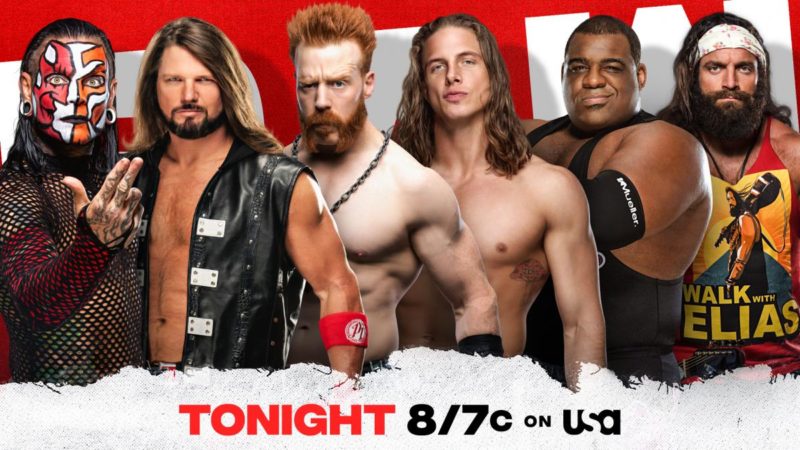 Drew McIntyre opens Raw, addressing his loss to Randy Orton at Hell in a Cell last night. As he starts talking about where he is mentally Miz and Morrison interrupt with Miz cutting a promo of his own. Miz gives a history of his time with the Money in the Bank briefcase in Orlando against Randy Orton. Shout out to Angry Miz Girl. McIntyre attacks both competitors beating them in and out of the ring, but Miz saves them by attacking the knee.

Jordan Omogbehin accompanies Styles again in this match that serves as a qualifier for the Raw Survivor Series team. AJ gives a promo about Jeff Hardy not only being unworthy of facing him for the spot, but AJ should captain the team. The match begins with Jeff and while there is quite a bit of action there’s a stunning moment where Omogbehin catches a dive.

When we come back from break Hardy and Styles are continuing their battle and the action is balanced between both competitors. Omogbehin doesn’t get any further involvement in the match but Styles still wins with a Phenomenal Forearm.

After the match Elias delivers a guitar shot to the back of Hardy.

Prior to the match R Truth is interviewed backstage and he says he’s going to use this match to scout his competition. R Truth does come down during the match and Every member of the match tries to pin Truth. During the chaos Lince Dorado pins Drew Gulak to win the match but R Truth escapes.

Scout the competition on #WWERaw in the middle of a tag team match while remaining #247Champion. pic.twitter.com/09brG3YMuK

Bray is hosting a Mad Tea Party while dressed as the Mad Hatter and awaiting Alexa Bliss. She brings a very special tea which she feeds to Ramblin’ Rabbit who dies due to the special ingredient Arsenic. She wonders how she got there and Bray talks about how The Fiend is there for her. Alexa announces that she’s interviewing Randy Orton later tonight who Bray has a history with and he says it’ll be “Fire.”

The women’s tag team champions approach WWE Official Adam Pearce with their own lists of talents they believe should be on the Women’s Survivor Series team. He promises there will be an announcement later tonight, though it seems neither Shayna or Nia had each other on their lists.

Elias is in the middle of the ring promoting his new album Universal Truth, but before he can perform Keith Lee interrupts with his entrance. This is the second Survivor Series qualifying match. Elias starts strong but Keith Lee’s athleticism appears to prevent him from getting an edge. Elias is finally able to find an opening with a knee lift reversing a Spirit Bomb as well as some ramming into the ring-post. As Elias looks ready to finish off Keith Lee suddenly Jeff Hardy’s music plays which distracts him enough for Keith Lee to pick him up and deliver a Spirit Bomb for the win.

MVP cuts a promo prior to the match saying that when they’re through with the match they’ll have rid WWE of Retribution and earned their payment.

The match has a pretty strong open where The Hurt Business seems to have the advantage despite the size of T Bar and Mace. Reckoning gets on the apron and she starts twitching, seeming to have a fit which distracts MVP and allows Slapjack to roll him up for a pin as Reckoning continues to squirm.

The next elimination is Slapjack though as Bobby Lashley dominates him. The fight between Bobby Lashley and T-Bar that happens causes a Double Count-out making the teams 2 v 2. Mace has a strong performance against Cedric Alexander but when Shelton Benjamin gets tagged in he hits Pay Dirt leaving Ali alone against Benjamin and Cedric. The intensity between Ali and Cedric is great as they have outstanding chemistry, but Ali hits Cedric with a chair getting DQ’d and earning a win for the Hurt Business. Ali is then run off by the rest of Hurt Business.

Rose By Any Other Name

Backstage Angel Garza is trying to seduce both Mandy Rose and Dana Brooke, though it fails as Mandy and Otis are still close. Nia and Shayna also arrive and despite both being offered a rose, Nia takes it herself. They try to recruit Dana and Mandy, but the duo say that they are undefeated since arriving on Raw so they should captain the women’s team.

Drew McIntyre vs The Miz

Miz is constantly targeting Drew’s knee throughout the match while Drew tries to use his strength advantage. Morrison attempts to assist Miz by attacking McIntyre with the Money in the Bank Briefcase, but he boots it away, suplexes Morrison on the outside, then tosses away the briefcase. One Claymore afterward is all it takes to put away The Miz and he celebrates his win with Matthew McConaughey in the Thunderdome.

Wanna see @DMcIntyreWWE throw the #MITB briefcase over them mountains like a football? 🏈#WWERaw pic.twitter.com/6S10EoEG6m

A Preview of Survivor Series

New Day are near a screen dressed as the Street Profits and give a rundown of several matches taking place at Survivor Series. The Hurt Business do come back and declare that they want the belts before Survivor Series so they can represent Raw instead.

Lana vs Lacey Evans vs Peyton Royce vs Nikki Cross.

Pat Buck and Adam Pearce are in the middle of the ring to announce the 5 women for the Raw Survivor Series’ team. The first four announced are Nia, Shayna, Dana, and Mandy. The final competitor will be determined by a fatal four way match taking place now. Peyton Royce and Nikki Cross get a significant amount of offense. Both Nikki and Peyton have moments where they wipe out all opponents. During a Tower of Doom Lana pulls out Peyton and gets the pin for herself, getting the final slot. After the match she goes and approaches her team, Nia gives Lana a hug but won’t let go. For the sixth week in a row Nia puts Lana through the announce desk.

You're seeing straight.@LanaWWE will be the fifth and final member of #WWERaw's Women's #SurvivorSeries team! pic.twitter.com/4ubmuP1yq0

This is the third Survivor Series spot match for tonight, which is odd since they’ve both only been on the brand for 2 weeks. This match utilizes the full space of the ring, both inside and out having constant action. Sheamus keeps enduring the heaviest hits Riddle throws his way including a Super Exploder. Riddle tries to land a Floaty Bro but Sheamus gets the knees up and Sheamus targets the back. Sheamus finally lands a Brogue Kick for the win to earn his spot on the team.

A Moment of Bliss with Randy Orton

Alexa’s music gets a slightly warped tinge to it when introduced. Randy Orton refuses to sit, and admittedly Alexa’s juvenile behavior is creepy. Randy says he knows Bray better than anybody and wants to know where The Fiend is. Drew McIntyre’s music hit sand he comes out fighting while Alexa Bliss sits in the corner and laughs. The lights start going out in the Thunderdome and when they come back up Randy is on the ramp while Drew is in the middle of the ring but The Fiend appears behind Randy. Without looking behind him Randy walks away from The Fiend and back toward Drew where the fight between the two continues. The show ends after Randy slams Drew onto a table once again.