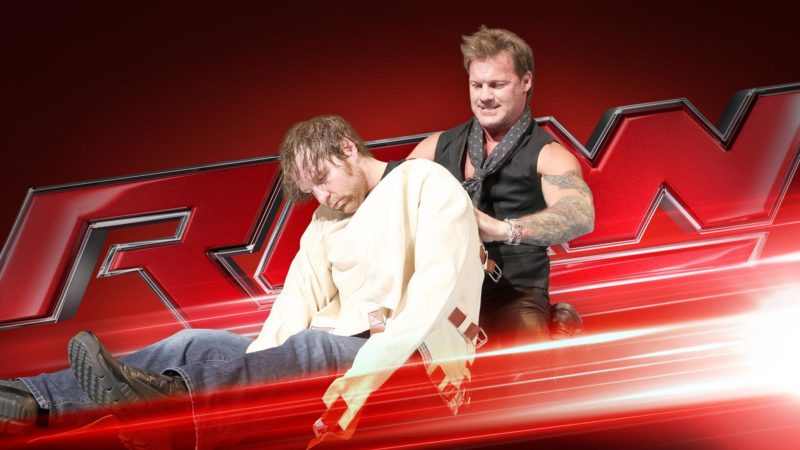 Airing Live On The USA Network

Welcome to the WWE RAW Pre-Show, and we are live on the WWE Network. Scott Stanford, Booker T, Corey Graves, and David Otunga hype what we will see tonight, which is Natalya and Charlotte having a contract signing for their match at Extreme Rules. Also, Kalisto will wrestle Alberto Del Rio.

There is a recap video of last week’s episode of RAW. Dana Brooke vs. Becky Lynch and Cesaro vs. Sami Zayn was also announced for RAW.

Welcome to WWE Monday Night Raw. AJ Styles walks down to the ring. Styles cuts a promo and says that he is tired of Roman Reigns calling him a liar. He said that he has heard that everywhere he goes. He said that his friendship with Karl Anderson and Doc Gallows would not help him win the WWE Title. Reigns walk out and told Styles that the other world titles that he has won don’t matter. The only title that matters is the WWE Title. This led to Anderson and Gallows and The Usos walking out. Reigns punched Styles and Anderson, and Gallows held Styles back. All six men have a staredown.

Singles Match: Sami Zayn vs. Cesaro with Miz and Kevin Owens on commentary.

They lock up, and Zayn tossed Cesaro to the floor. Owens attacked Miz and sent him into the apron. Owens grabbed the IC Title, and Miz attacked him. This led to all four men getting into a brawl.

This one turns into a no contest. Shane McMahon dances his way out to the stage and books a tag team match between the four stars. Stephanie McMahon walks out and changes the match and told them that it’s next.

Tag Team Match: Cesaro and Miz vs. Owens and Zayn.

Cesaro and Owens lock up. Cesaro works over the left arm of Owens. Zayn was tagged in, and Cesaro hit an arm drag. Zayn hit one of his own. Cesaro with an uppercut and Miz tagged himself in. Miz hit a suplex then locked in a headlock. Owens tagged himself in and hit a back splash.

We’re back with Owens getting the hot tag from Zayn and hitting a cannonball to Miz in the corner for 2. Miz with a back elbow and Cesaro tagged himself in. Cesaro with uppercuts to Owens. Cesaro hit a drop kick then Zayn got tagged in. Zayn with a crossbody but Cesaro caught him and hit a back breaker. Miz got the blind tag. Miz tossed out Cesaro, but Cesaro blocked and hit the Skull Crushing Finale to Miz. Zayn hit a big boot to Miz for the win.

Post-match, Owens attacked Zayn and walked to the back.

Epico hit a clothesline then a big suplex to Kennedy. Primo was tagged in and hit a drop kick. Primo and Epic hit the Shining Star for the win.

Post-match, Epico, and Primo told the fans to go to Puerto Rico.

Dean Ambrose walked out to the ring and told Chris Jericho told get out there. Jericho does and demands that Ambrose gives him $15K for destroying his jacket. He also demands that Ambrose gives him an apology. Jericho vowed to destroy Ambrose at Extreme Rules. Ambrose told Jericho that he has a gift for him, and this leads to a steel cage being lowered with a straight jacket above it. Ambrose welcomed Jericho to the first ever Asylum Match. Ambrose said that this match had no escape rules. Jericho promised that Jericho would scream for mercy and would never be the same again.

Goldust and Truth beatdown Breeze in the early going. Breeze knocked down Truth then Fandango chopped him several times. Truth and Fandango hit a double clothesline. Goldust and Breeze got the hot tags. Goldust hit an uppercut to Breeze then a spine buster. Fandango broke it up, and Truth tossed him to the floor. Truth accidentally kicked Goldust, Breeze tossed him to the floor and pinned Goldust for the win.

We’re back with The New Day walking down to the ring. There is a box that looks like a time machine. They get in, and Kofi Kingston popped out with his old accent and said 2009 was his best year. They then come out with mustaches on and said that the by-gone era sucks. The Vaudevillains then attack New Day and hit their tag team finisher on Kofi.

Jey landed a series of chops to Anderson. He clotheslines Anderson to the ring then drop kicks Gallows. This led to Gallows being tagged in and hit a power slam to Jey. Gallows hit a series of elbow drops and leg drops. Jey fought back and got the hot tag to Jimmy. This led to Jimmy hitting a superkick and then a dive off the top rope, and we cut to break.

We’re back with Anderson hitting Jimmy with a clothesline. Jimmy sent Anderson to the floor and got the hot tag to Jey. Jey hit an outside dive, which took out Anderson and Gallows. Jey hit a crossbody to Anderson for 2. Jey hit a samoan drop and then a back splash. Anderson kicked him in the face and hit a spine buster for 2. Jimmy hit a superkick to Anderson for 2. Gallows broke it up. The Usos hit a double superkick to Gallows and Anderson. Jey went to the top rope and hit a splash for the win.

Post-match, a brawl broke out. Styles teased hitting Reigns, but Reigns punched him in the face. Reigns hit Styles in the back. Reigns hit a Superman Punch to Anderson and Gallows. Styles popped up and hit Reigns in the back. Styles hit the Styles Clash to Reigns on a steel chair.

Big Cass cuts a promo about having a problem with The Dudley Boyz. He mocked them and said that he would send them back to the stone age.

Bubba got a table, and it distracted Cass. Devon attacked him from behind and beat him down. Cass fought back, he hit a big boot to Bubba and then his finisher to Devon for the win.

We’re back with Del Rio in control of Kalisto. Rusev is shown beating down Sin Cara backstage. Kalisto fought back and hit a drop kick. Kalisto missed a spear and ate the ring post. Del Rio went to the top rope but missed a dive. Rusev walked down to the ring with a beatdown Cara. Kalisto hit a hurricanrana for 2. Del Rio fought back and hit the back stabber for the win.

Shane and Stephanie McMahon are in the ring for the contract signing between Natalya and Charlotte for Extreme Rules. Stephanie introduced Charlotte with Ric Flair, and they walk down to the ring. Charlotte asked where does she sign? Shane cut her off and introduced Natalya, who walked down to the ring. Natalya hyped her feud with Charlotte and brought up their matches in NXT. She called Flair creepy and that she doesn’t even know who Charlotte is anymore. Natalya signed the contract. Charlotte called her delusional and said that the fans weren’t here to chant for Natalya but rather for her. Charlotte said that the fans won’t hate her because they worship the ground she walks on. Charlotte told Flair to stop wooing. Charlotte said that she beat her once, and she would do it again at Extreme Rules. Charlotte had a problem with the contract. Shane said that if Flair interferes in the match, then Charlotte would forfeit the title. Shane told Flair to calm down and then brought out security. Stephanie told Charlotte that if she didn’t sign the contract, then she would forfeit the title tonight. Charlotte signed it. Flair told Stephanie that she is the worst business person of all time. Flair threatened to beat up Shane. Shane tried to calm him down. Stephanie slapped Flair, and he fell. Charlotte went after Stephanie, but Natalya took her down and locked in the Sharpshooter. Natalya stands tall in the ring with the title to close the show.