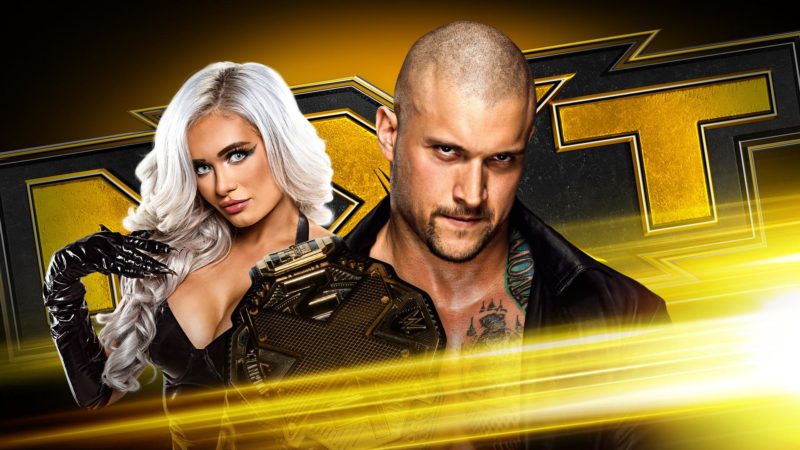 Happy Wednesday, Wrestling Edge.  It’s time once again for to see what the black and gold brand has to offer in this week’s WWE NXT.

NXT Champion Karrion Kross and Scarlett start off NXT with an address to the NXT crowd. Notably Kross has his arm in a sling, which has been previously confirmed to be a separated shoulder.  As the reality of the situation dictates, Kross will be unable to defend the NXT Championship and lays down the title to vacate it. He leaves a warning that Doomsday is still coming, and the obstacles will be cleared.

"On the path there are obstacles, but for me, the obstacles are the path."

Well, at least we also have some GOOD NEWS…#WadeBarrett joins @VicJosephWWE on commentary for TONIGHT's #WWENXT! pic.twitter.com/mivSg6IRhT

Breezango jump Imperium to start, but quickly begin the match in earnest. Breezango appear to take the match seriously, putting aside shenanigans to put their ability on display.

The action is back and forth between the teams, and in an incredible piece of tag team action Fandango delivers a leg drop to both members of Imperium to pin Aichner and win the NXT Tag Team Championship.

Damien Priest is backstage being interviewed about his NXT North American Championship when Tim Thatcher approaches and challenges him to a standard wrestling match for the belt.

Tommaso Ciampa is back in NXT for the first time since June, and defeats Jake Atlas in short order.  Ciampa follows this swift victory with an attack on Atlas to the outside, throwing him into steps, the barrier, and battering him with the ring.  Even when Atlas is getting stretchered out Ciampa continues the attack, giving him a DDT off of the gurney.

Mercedez Martines is set to face off against Mia Yim, but Robert Stone has cancelled her appearance. During his promo, he is suddenly run over by a tank, adn a wild Shotzi appears while the refs take him out from under the Tank.

The match itself gives both women a strong feature, with impressive offense from each. Shotzi picks up the win with a top rope senton.

General Manager William Regal declares that next week on the special Tuesday edition of NXT, four former NXT Champions will face off to determine a new champion.  The men named are Johnny Gargano, Tommaso Ciampa, Finn Balor, and Adam Cole.  This match is currently heel-heavy, and it will be a four-way 60 minute Iron Man match.

What a HUGE announcement from @RealKingRegal!

NEXT TUESDAY NIGHT AT 8/7c on @USA_Network: @FinnBalor, @NXTCiampa, @AdamColePro and @JohnnyGargano will compete for the vacant #NXTTitle in a 4-Way 60-minute Iron Man Match! pic.twitter.com/h5U2Khjymp

A long of action for this match, true to its cruiserweight setting. Santos Escobar is meticulous with his attacks and tries to keep Swerve off his feet and isolate his limbs.

Swerve fires up when we return from commercial, utilizing the entire space in and around the ring to deliver intense offense.  Joaquin Wilde distracts the ref while Raul Medoza tries to trip up Swerve for Santos Escobar, but it is unsuccessful. Breezango come out and clear the rest of Legado Del Fantasma from the ring for Swerve. After a brief struggle, Santos Escobar escapes the ring and puts on a Luchador mask, and knocks out Swerve with a headbutt to win and retain. The mask clearly has something loaded in it that caused a headbutt to be more effective, but they don’t reveal it.

This match comes after a challenge to any member o fUndisputed Era made earlier in the day.  Drake quickly takes out Roderick Strong and Bobby Fish, then focuses on the match, using his agility against the technique of KOR.  Unfortunately it isn’t enough as Drake Maverick ends up tapping out to a kneebar.  Undisputed Era rushes the ring with a chair to attack Maverick, but Killian Dain rushes out to clear UE out of the ring.  Drake gets up to show thanks, but Dain lays him out.

The main question of the match is whether or not Io and Ripley can work together despite the hunger for the title.  Kai and Gonzalez do a great job with their tag team synergy, isolating Io throughout the majority of the match.

Later in the match, Rhea is taken out by Mercedes Martinez, but Rhea is able to save Io by deflecting Dakota Kai’s kick.  When Rhea gets in, Raquel delivers a quick boot and a single-arm Powerbomb for the pin and win on Ripley.

Looks like @RealMMartinez has some unfinished business with @RheaRipley_WWE. #WWENXT 👀 pic.twitter.com/ZgNR6woE53