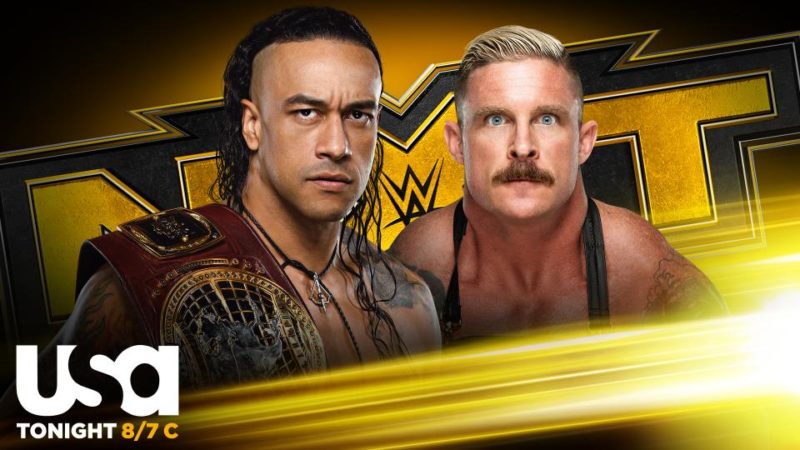 Welcome to Wrestling-Edge.com’s results for WWE NXT for October 14, 2020. On this episode we see Dexter Loomis challenge for the NXT North American Championship.

Kyle O’Reilly joins Bobby Fish and Roderick Strong ringside, though they open the match talking about Adam Cole’s injury. This match will determine the number one contender for the NXT Tag Team Championships. The match opens with close quarters grappling between Lorcan and Strong and continues with Burch and Fish. Breezango are watching the match from the ramp, scouting their competition.

The match is incredibly heavy hitting, Burch and Lorcan delivering an elevated DDT that Fish is able to pull Roddy out from. Fish makes Lorcan take out Burch from the apron and Roddy is able to get the pin for the win.

Finn Balor did end up needing surgery for his broken jaw, but GM Regal will allow him to retain the title while they find out the full timeline of recovery.

#WWENXT GM @RealKingRegal is waiting to see how @FinnBalor recovers post-surgery to determine the fate of the #NXTTitle.

Ember Moon talks about how terrible of a year 2019 was for her and discusses her goals getting back into NXT.

This is an awesome way to feature both of the younger talents and is pretty balanced action between both competitors. Legado Del Fantasma come out and while Adonis is distracted Atlas rolls him up for the quick win. Afterward Adonis is attacked, but Atlas helps him out. Santos Escobar comes out to help his minions but Isaiah Swerve Scott comes out with chairs and joins the faces in the ring to fend them off.

Johnny is tempering the attitude of the cocky newcomer in this match, and Gargano is making sure he takes his time teaching. Gargano is clearly in control in the opening of this match, though Theory does get in a few good shots that show off his athleticism. Theory is able to scout some of Gargano’s moves and learn from them, quickly countering the offense of Gargano. This is probably the best Theory has looked so far, paired with the perfect opponent for his style to really shine. It’s weird since Johnny is currently a heel but Theory is doing the heel schtick in this match. Gargano is able to eventually catch Theory with a superkick and get the pin and win against the upstart.

Class is in session as @JohnnyGargano looks to teach @austintheory1 a lesson in a back-and-forth battle on #WWENXT! pic.twitter.com/YKlyDaumvy

The winner of this match gets to challenge Io Shirai for the NXT Women’s Championship at Halloween Havoc. These two are quite agile but also use their full bodies to attack each other including a scary dive by Shotzi to the outside. The match continues and the two battle with Candice having the advantage over Shotzi.

When they come back form break Shotzi is back on top, hitting Candice with a cannonball on the ropes. But a superplex attempt by Shotzi is turned into a german suplex by Candice. There is some unique offense by Shotzi which includes a very interesting roll-through submission. Candice is able to roll out and escape Shotzi’s senton. Indi Hartwell appears at the glass and hands Candice Brass Knuckles which lets her hit Shotzi for the win.

Robert Stone is in ring with Aliyah trying to hyper her up prior to the match, but soon he is cut off by Toni Storm’s entrance. Toni is quick on the attack but Aliyah is able to wind her way around Storm with some surprise offense. Toni gets the win with a Storm Zero, capping her return with a win.

Prior to the match Drake and Killian Dain are going through the merch prospects where they are clled “The Furry and The Fury.” Sadly when the match begins Dain has them kill the music before the whistle hits. Love how when Dain does tag Maverick in he uses Drake as a weapon. Maverick takes a lot of damage throughout the match, but Dain is an absolute monster in his ability to handle Imperium on his own. Drake also gets a high-octane hot tag, but some shenanigans between Imperium to take Dain out of action allow Imperium to hit Drake with a Doomsday Device for the win.

After the match Ever RIse come out to mock Drake Maverick, but Killian Dain bowls them both over declaring to Drake that “Nobody hits you but me.”

Both of these competitors have a lot of power and athleticism behind them. Both are able to launch attacks from anywhere in the ring and their equal strength allows them to manhandle each other with ease. Damien Priest is able to escape Loomis’s holds and decides to focus on the recently injured ankle in order to dominate his opponent. Priest continues to use his length in order to maintain control over Loomis, but he escapes and manages to continue striking despite landing heavily on his ankle. Priest manages to get up and tries to attack Loomis but he nearly gets put to sleep after a Uranage and sleeper hold. When Priest seems to be at the mercy of Loomis, Cameron Grimes comes out and delivers a stomp to Dexter Loomis behind the refs back. Damien Priest is able to secure the win and retain his title. When Grimes gets in the ring after the win Priest hits him with a Reckoning before leaving himself.

Johnny attacks Priest after his match and William Regal says that while their matches are still on for Halloween Havoc, Shotzi will introduce the stakes. Shotzi comes out and declares that their fates will be decided by “Spin The Wheel, Make A Deal.”

SPIN THE WHEEL… MAKE A DEAL!!!