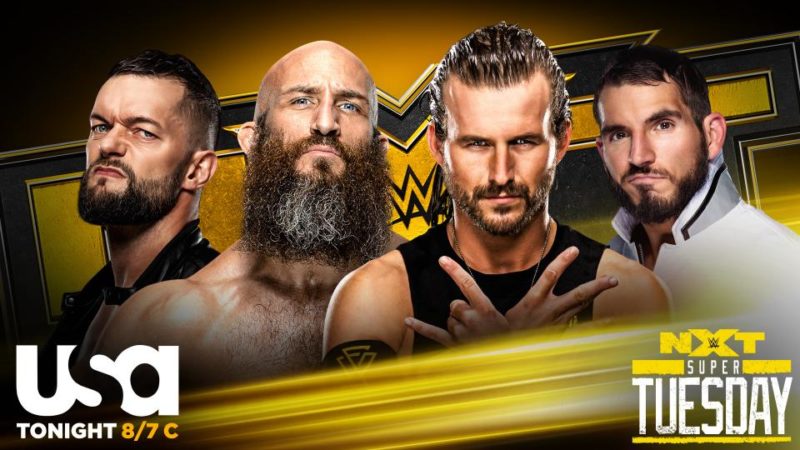 Hey there, Wrestling Edge! Tonight’s a very special episode as we get a main event Four-Way Ironman Match for the NXT Championship. We’ll find out whether Balor, Cole, Gargano, or Ciampa are truly Mr NXT.

Joaquin Wilde starts the match by diving to the outside while Legado del Fantasma starts getting weapons. While the heels start out at the advantage, Fandango evens the odds by using a ladder as a weapon against all Legado del Fantasma members. Tyler Breeze also has a comedic spot unleashing the power of a fire hydrant.

When we come back to break we see that Tyler Breeze was put through a table on the outside and Legado del Fantasma has gotten the advantage once again. Imperium come out to exact revenge on Breezango, though Isaiah “Swerve” Scott and Fandango leap off of a conspicuously placed forklift to dive on the heels. Swerve and Santos Escobar are the two left in the ring and Swerve plants Escobar with a driver to get the pin and win, with Swerve celebrating on the forklift.

Prior to the match, they play a package about Tegan Nox and her prior relationship with Candace. Kayden Carter accompanies Kacy Catanzaro for the match. The match has a lot of speed to start, also probably one of the smoothest starts to a Kacy match so far in NXT. Very cool move as well as Kacy hits a flipping heel kick on LeRae. It isn’t enough as LeRae wins with a curb stomp on Catanzaro.

Afterward Candice gets on the mic to say that with seeing Tegan’s package and the KC friendship, she would love to hash things out and treat Tegan to dinner.

Reed is going hold for hold with thatcher, with the added advantage of his size in an effort to get an edge over the more technical Thatcher. Bronson maintains a major advantage over Thatcher, keeping himself on the offensive against Thatcher. Unfortunately Austin Theory comes out and attacks Reed when the ref can’t see and Thatcher is able to lock in the Arm Bar for the win.

This one-on-one battle between @bronsonreedwwe and #TimothyThatcher has quickly turned into a hard-hitting slugfest. #WWENXT pic.twitter.com/3hht8dROs9

Answering the challenge of Rhea Ripley, Mercedes Martinez says that she will gladly face her in a Steel Cage next week.

"Next Tuesday, it's ON."@RealMMartinez has accepted @RheaRipley_WWE's challenge to battle in a STEEL CAGE next week on #WWENXT! #NXTSuperTuesday pic.twitter.com/YaZa9lNNFD

This is a battle between four former champions with Johnny Gargano, Adam Cole, Finn Balor, and Tomasso Ciampa competing.

The wait is over.

No man has the clear advantage beginning this match, with action taking place both within and outside of the ring. 20 minutes into the match there are no falls or submissions recorded.

Balor comes close to getting a pin on Gargano with a Coup de Gras, but Johnny rolls out of the way. Ciampa attempst to take advantage of this with an Air raid crash, but Finn kicks out. At one point during the picture-in-picture both Gargano and Ciampa have Balor and Cole in submissions, but neither is able to make a breakthrough. Balor finally gets an advantage by throwing cole into Gargano on the outside and following it with a kick on both after sending Ciampa through the timekeeping area. He lands the Coup de Gras full-bore on Adam Cole and this results in the first pin at the 25 minute mark

Balor doesn’t lose any momentum, continuing his attack even driving his full weight into both Gargano and Ciampa continuously. Both Gargano and Ciampa are able to get their bearings back, with Ciampa even landing a Fairytale Ending on Balor. Gargano, however chucks Ciampa out of the ring and steals the pin. Two competitors tied at one a little past the halfway mark.

Everybody tries to find their advantage once again, but Adam Cole is able to make quick work of the rest to clear the ring and land a Panama Sunrise on Gargano to get his first pin in the match.

Ciampa increases his aggression in order to try to get the upper hand on any competitor, and he finally is able to hit a double draping DDT on Cole and Gargano. He adds a Fairytale Ending to Cole in order to get a pin and make this a four-way tie.

The match keeps descending into chaos, with a ton of action within the picture-in-picture as well. The match also appears to go back to having no one competitor with a clear advantage. Every man has his second wind, hitting and surviving finishers throughout, even leading into the final minute of the match. Though Ciampa hits Gargano with a second Rope Air Raid Crash, Finn hits a stomp on Ciampa to get his second Pin.

Out of nowhere Cole hits a Last Shot and in the last three seconds makes the pin to tie the match. 2 a piece between he and Balor.

With no true finish, GM William Regal declares that next week it will be Cole vs Balor one fall to the finish fo rthe NXT Championship.