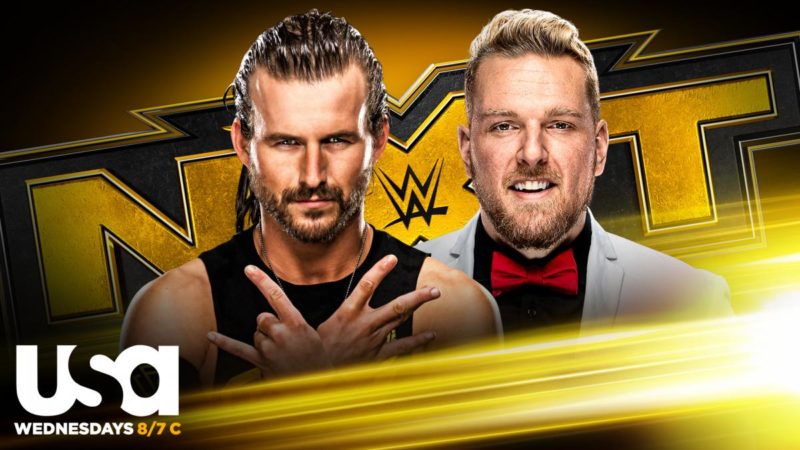 We start NXT with immediate action as Johnny Gargano battles Ridge Holland to battle for a place in the NXT North American championship.  Johnny’s athleticism is easily matched by the strength and size of Ridge Holland. Johnny targets the leg in order to cut Holland down to size, rapidly increasing his attack.

This could have been career ending and even life threatening.

Glad Gargano came out of that ok and hopefully in the long run. #WWENXT

During the commercial Holland catches Gargano for a powerslam and appears to drive his neck directly into the mat.  Turns out Gargano is playing possum as he tries to win via surprise superkick.  Holland continues his attack though Gargano does seem to be quite out of it throughout the match.  With an assist from Candice, Gargano is able to hit One Last Beat to pin and win.  Johnny Takeover rides again.

Dakota Kai is in singles action against Jessi Kamea. They give Kamea a strong showing against the number one contender for the Women’s Championship, but Dakota Kai gets the win with a Go To Kick.

So much for going it alone…

Dakota Kai is given the mic and declares her intent to take the championship off of Io Shirai.  Io makes her way out to the ring and there’s a quick scrap between the two whcih sees Shirai lay Kai out before Raquel Gonzalez comes out to woman-handle Shirai. Gonzalez takes Io to the ring and leaves Io beaten in the middle of the ring.

After the match we get a short interview with Tegan Nox, who is now willing to talk to Candice.

Legado Del Fantasma is in action against Breezango and Isaiah Swerve Scott.  Chaos reigns immediately  as the two teams attack each other taking the fight outside the ring as well.  The chaos continues throughout the match.

The heat picks up when Serve gets in the ring with Santos Escobar, and despite getting the edge there is an unintentional tag causing Swerve to not be the legal man.  Caught by surprise, Swerve is quickly eliminated and Santos Escobar plants Tyler Breeze with a phantom driver for the win.

Adam Cole comes down to the ring flanked by Undisputed Era in order to face Pat McAfee. Pat also comes out with security and demands Cole have UE exit, so he does and both stand in opposite corners.

What will happen when @AdamColePro and @PatMcAfeeShow get their hands on each other THIS SATURDAY at #NXTTakeOver: XXX???#WWENXT pic.twitter.com/JbVOfmLl7o

Pat cuts a promo that makes me think that maybe he’s the heel here? He spends the entire rant cutting down Cole and his NXT Career. At the end of McAfee’s rant, Cole clears the security and UE steps in with him, letting Cole walk up to McAfee to get the last word before TakeOver.

The Robert Stone Brand of Mercedes Martinez and Aliyah take on Shotzi Blackheart and Rhea Ripley in tag team action. Shotzi is clearly excited to have her helmet back.  The match begins with Mercedez and Rhea attacking each other, though the fire quickly transfers to Shotzi attacking Aliyah.  This team seems to elevate Aliyah and Robert Stone while giving Martinez a story for her introduction to the larger universe.

There is a lot of action in this match, and the battle between Ripley and Martinez continues to escalate.  Shotzi is able to get the win with a giant senton on Aliyah after Rhea powerbombs Mercedes Martinez on the concrete

We also get a fantastic package for Keith Lee vs Karrion Kross which does an ace job hyping their match.  No commentary needed, the video speaks for itself

The final spot in the NXT North American Title ladder match is on the line as two of NXT’s top stars battle.  Them mentioning the fact that Dream has been away from the ring is awkward if you’ve spent any recent time on Twitter, as despite WWE’s claim that they found no evidence of misbehavior by Dream, evidence is posted online.

EVERYBODY has their sights set on the NXT #NATitle!!

Cameron Grimes interrupts the match mounting a ladder ringside and caressing the North American Championship.  Johnny Gargano runs out and throws Grimes off the ladder, knocking him into the referee.  Bronson Reed and Damien Priest also come out to join the chaos.  Timothy Thatcher puts the nail in the coffin for Finn Balor as he attacks and allows dream to hit a Dream Valley Driver as well as a Purple Rianmaker for the win.

The rest of the ladder match competitors enter the ring immediately after to attack one another with Bronson Reed being the one to stand tall at the end of the show with the North American title in hand.