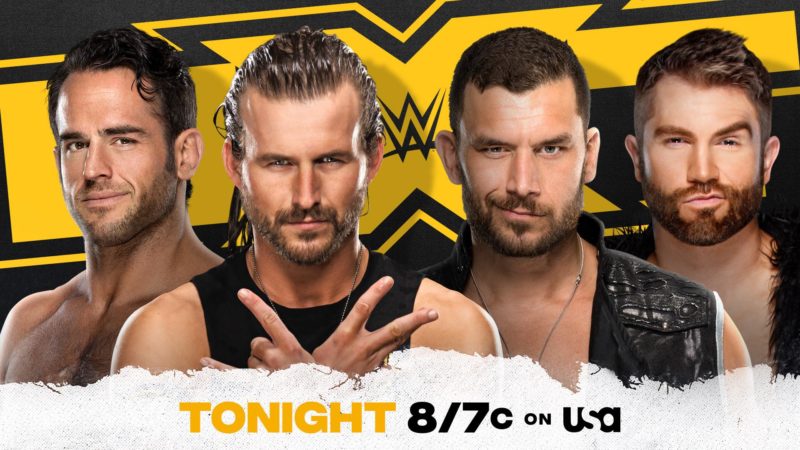 Indi accompanies Candice to the ring. The bout between the two women is quite technical, with Candice taking every chance she can to punish Shotzi.  Shotzi finds an opening to dive on both Indi and Candice after an apron bump. Candice eventually gets the clean win against Shotzi after Indi provides a distraction.

THE WAY proves to be the difference-maker on #WWENXT! pic.twitter.com/CbFQmDcTIn

Finn comes out and puts over Kyle O’Reilly, but mentions how Kyle is now the one drinking out of a straw. He also puts a warning out for whomever chooses to challenge him next.

Pete Dunne comes down with Lorcan and Burch, and makes himself the next challenger. All three start attacking Finn, who fights them off for a good amount of time but is eventually overpowered. Eventually Kyle O’Reilly comes out to make the save along with Roderick Strong and Adam Cole.

This is the first match of the tournament, and Grizzled Young Veterans seem to have the edge over Ever Rise. They’re able to keep the match mostly 2-on-1 preventing Parker from tagging in Martel.

It's a first-round matchup between #EverRise and the Grizzled Young Veterans on #WWENXT!

Ever Rise gets an opening and they manage to nearly pin James Drake, but Gibson is able to keep the two alive. The Grizzled Young Veterans get the win and advance in the Tournament.

Shotzi talks about needing a new partner for the Women’s Dusty Classic, and it turns out that new aprtner is going to be Ember Moon.

Johnny rips up the caricature that Lumis sent him earlier, and the match starts off between the two.

Lumis is using pinpoint precision to brutalize Johnny Gargano, though Gargano is able to use quick attacks to counter. Theory also frequently distracts Lumis, who is more than capable of fighting him off, but the Gargano takes advantage of one of the opportunities to roll up Lumis. Gargano picks up the win and continues attacking Lumis when he tries to choke out Theory on the outside. KUSHIDA comes down and makes the save, locking the Hoverboard Lock on Gargano.

What time is it?

Wade Barrett interviews both Ciampa and Thatcher ahead of their Fight Pit battle coming up.

The FIGHT PIT is home to Timothy Thatcher and brand new territory for @NXTCiampa.

The fight is ON next week on #WWENXT! pic.twitter.com/DQtUHKonun

MSK is revealed to be the former Rascalz now going by the names of Wes Lee and Nash Carter.

They’ve continued to have incredible athleticism and are able to hold themselves against Scott and Atlas easily. There’s even a small reference to their prior gimmick when Vic Joseph makes a comment. They are an excellent example of tandem tag team offense, though Swerve and Atlas are able to keep them on their toes. After a grueling match MSK get the win over Swerve and advance in the Dusty Cup.

Xia Li has a part of her lower third that says “Tian Sha” as well, though unsure what that means. She dispatches her opponent with a right hand and a spin kick before the pin. After the math, the woman on the throne does a hand signal forcing Xia to continue attacking the girl after the match.

Kyle O’Reilly is ringside for Strong and Cole, this being a team-up of two former Tag Team Championship teams. Both teams put on incredible performances, with Breezango being the larger team of the two. The teams are in the middle of battle when Lorcan, Burch, and Dunne come out to attack Kyle O’Reilly. Finn Balor also joins the fray, and after crushing Kyle’s Jaw against the railing, Dunne, Lorcan and Burch stand on stage watching over their work.

Adam Cole gets the win for Undisputed Era and the two groups stare each other down as UE check on Kyle.