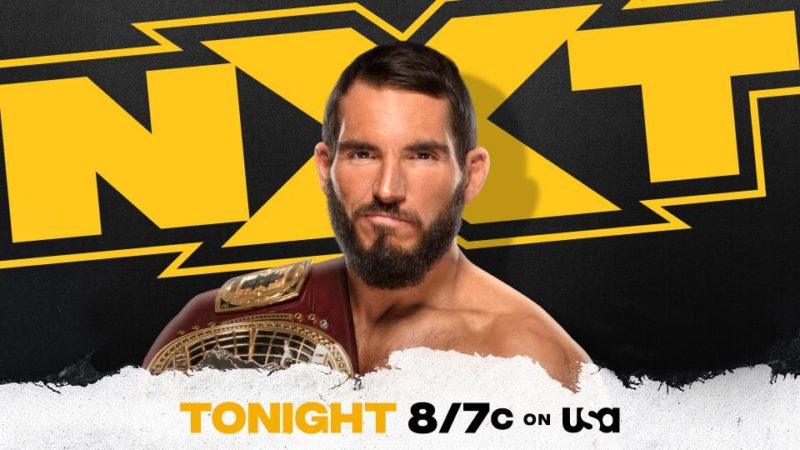 Johnny Gargano comes out with a wheel that he hopes will allow him to reverse the curse of title defenses. He has yet to successfully defend any of his titles, but according to the spin it’s Leon Ruff. The wheel is clearly rigged to land on that name, but Ruff is excited for the opportunity to capture the NXT North American Championship.

Gargano is aggressive from the outset, not giving Ruff any opportunity to attack. Outside of the ring Gargano finds Damien Priest who startles him with his mere presence. Ruff almost gets a roll-up due to the distraction, but Gargano continues the attack as well as taunting Priest.

The distraction of Priest however allows Ruff to get a crucifix pin for the win and to become new NXT North American Champion!

Backstage Leon Ruff is celebrating his victory and since Gargano’s going to be upset Damien Priest gives him the keys to his car to escape. Gargano tries to fight Priest and then claims illegitimate victory for Ruff. He’s sent to cool off by Mr Regal after the Refs are forced to hold him back.

Legado Del Fantasma join Santos Escobar ringside, though it looks like Atlas attacked Wilde with a pipe earlier in the day. Atlas is fierce and continuing to keep Santos Escobar in his sights. Santos finally begins to exert control over Atlas, having multiple opportunities to strike. Legado Del Fatasma try to attack Atlas with a steel pipe, though Atlas successfully fends them off and eventually earn them an ejection from the match.

Atlas is resolute in his endurance, and is driven to continue attacking Santos Escobar. Atlas almost slips diving through the ropes to Escobar on the outside, but recovers well. Escobar is able to capitalize while back in the ring and retain his title after catching the Rainbow DDT.

Boa comes out to the ring prior to the match to reveal that Xia is not there tonight so she can’t have a match with Xia despite Xia being the one to call her out. She takes her dissatisfaction out on Boa, beating him on the outside of the ring, tossing him into the sides of the Capital Wrestling Center.

Gonzalez delivers a boot and slam to Boa, leaving him lying in the center of the ring. A Dragon shows up around the CWC and materializes into an old man with a message for Boa that also marks his hand. He walks away after delivering the message leaving Boa watching his mark.

Toni and Candice are both quite technical in this match, continuing their traditions of being hard-hitting and high-flying in their matches.

Non-stop action between the women as they try to get the upper hand on each other. In the end it is Candice who is able to get the pin with her feet on the ropes. Afterward Candice attacks Toni and when Shotzi comes out for the save Ghostface is there to assist Candice. It is revealed that Ghostface is Indi Hartwell as she and Candice stand over shotzi’s body.

This match is taking place because Thatcher threw his pupil into Loomis’s art earlier in the night. Thatcher and Loomis are two very different energies of intensity, and they honestly seem perfectly paired for one-another. Thatcher’s ability to lock in whatever hold he desires feels ineffective on Loomis who feels no pain. The focus of Loomis serves him to fight off Thatcher as he tries to fight him off the top rope. Cameron Grimes comes out to provide a distraction which allows Thatcher to hook the arms for a pin.

After the match Cameron Grimes tries to attack, but Loomis initially fights him off. He eventually manages to put a burlap sack on Loomis’s head on the outside and leave him lying saying he’s no longer afraid of him.

"I ain't scared of you, Lumis…"@CGrimesWWE is facing his fears and then some on #WWENXT! pic.twitter.com/cmFZ8jaVYE

Prior to the match Pat McAfee puts over his group as the greatest 4-man tema in wrestling history. Afterward he rips apart the Internet Wrestling Community before stepping behind the commentary desk.

Breezango have a different focus this match, taking the threat of Lorcan and Burch seriously. On the floor, Breezango make sure to also keep an eyey on Pete Dunn and Tyler Breeze throws Danny Burch into Pat on commentary. When they come back the brawl has continued between all four competitors, and when Breeze goes for a powerbomb, Pat McAfee jumps on the Apron for a distraction. Drake Maverick comes out to make the save, kicking off Lorcan and attacking McAfee. It’s not enough as Dunne attacks Maverick and allows McAfee to be used as a distraction while he takes out Breeze causing Fandango to get pinned.

After the match as they celebrate, Drake maverick continues his attack but is quickly cleaned out by the group. The brawl intensifies as McAfee’s crew leaves everyone lying on the outside with McAfee delivering the final blow with a punt. I can only assume this is the setup for War Games.