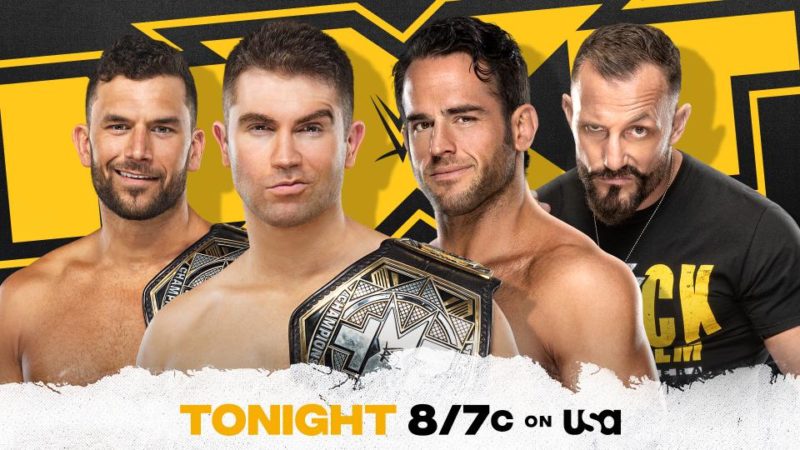 The show starts with KUSHIDA already in the ring and as Velveteen Dream makes his way out he’s attacked by Ciampa. They team up two against one to beat down Velveteen Dream who is in a cast. Ciampa maintains brutality through the match while KUSHIDA focuses on grabbing a hold. Dream finds his way back into the match to deliver a Dream Valley Driver before being kicked out by Ciampa.

The mayhem spreads throughout the Capital Wrestling Center, with KUSHIDA and Ciampa focusing more on punishing dream than Fighting each other. In the end though, the cast of Dream comes into play when he hits Ciampa with it which allows KUSHIDA to get the roll-up victory.

Undisputed Era cuts a promo about their match later tonight, but Adam Cole appears via iPad on a stand to give his blessing to his bros.

.@AdamColePro is getting better every, single day. 🙏

This is Ember’s first singles match back, being a bit condescending to open, but Kamea quickly ups the aggression. Ember begins taking her more seriously as a threat and Kamea is getting a lot of offense in. Ember walks away with the victory using a leg trap submission that incorporates a crossface.

After the match Ember is attacked by Dakota Kai who gives her a kick to the head and leaves her hanging on the apron.

Backstage Bobby Fish has been attacked and the Undisputed Era is taking him to the trainer as he keeps weight after his ankle. During the next match they have Fish going to a local medical facility and he’s going to be replaced by Kyle O’Reilly.

Austin Theory struggles to find a way to overcome the sheer force that is Bronson Reed, while Reed appears to land every shot aimed at Theory. Theory tries to find an opening but just isn’t able to as Reed gets the win with a colossal splash. After the match Theory jumps on the mic and refuses to leave the ring until he beats Bronson. Reed accepts and though Theory gets the jump on Bronson, he gives him a Samoan Drop to put Theory down for another win.

Immediately after the match Theory goes to his car and leaves the CWC.

The match immediately descends into a brawl with the babyfaces having the advantage. Atlas isolates Wilde from his partners, even dodging illegal attacks from the rest of Legado Del Fantasma with extreme athleticism. Legado Del Fantasma find their opportunity with isolating Ashanti Adonis, keeping him from tagging in the rest of his team. When Atlas gets in he’s able to clear the apron and land shots on Santos Escobar before Swerve gets in for the heavy attack. Everybody ends up down when Jake Atlas turns Raul Mendoza’s dive into a Spanish Fly. Everybody starts getting their hits in and after an impressive waterfall Wilde gets the pin on Adonis to get the win for Legado Del Fantasma.

Ever Rise vs Drake Maverick/Killian Dain

Ever Rise start with an attack on Drake Maverick and do everything they can to keep him out of reach of Killian Dain. Dain eventually finds a way to tag Drake and is able to fend off Ever Rise two-on-one but when Chase Parker gets Dain in a single leg crab while Matt Martel forces Drake to watch Maverick snaps. Drake Maverick brings in a chair and hits parker, fends off Martel and earns a disqualification. Killian Dain is surprised but impressed by this development, asking where this guy has been this whole time.

Roderick Strong is found attacked backstage, and Kyle O’Reilly decides to go to the hospital instead of taking Lorcan or Burch as a Tag Partner. Since all of UE is out, Lorcan and Burch are the replacements in the championship match.

Kacy tries to utilize her superior agility and athleticism, but Xia quickly gets to using brutal methods to try to keep Catanzaro down. Catanzaro starts making a comeback, getting Xia against the ropes before hitting a very tight sunset flip. Kayden Carter tries to rescue her partner but Xia fends her off. As she continues to beat down Catanzaro suddenly Raquel Gonzalez comes down to the ring and beats down all 3 women to send a message to Rhea Ripley.

Thatch As Thatch Can

Tim Thatcher is in the ring talking about what it takes to be a superior technical wrestler. He keeps getting Anthony Green’s name wrong and gives lessons while increasingly delivering pain to his student. Tired of being taken advantage of, Anthony Greene tries to out-grapple Thatcher, which causes Thatcher to call in a ref so they can start a proper match. Thatcher makes short work of Green catching him in a half crab and holding it while Greene tries in vain to tap.

Lorcan and Fandango start the match off with some standard grappling, including some impressive moves such as an armdrag durned into a headlock. When Burch and Breeze get into the ring the match continues to be grounded in technique and straight-forward fighting. Lorcan and Burch try to get the submission by teaming up against Breeze, but Drake tries to get Lorcan out of the ring. Breeze escapes and targets Burch’s knee. Lorcan and Burch are both put down with a set of Stereo Superkicks but as they go to splash Fandango gets thrown off the turnbuckle by a mystery masked man. This allows Burch to deliver a low blow to Breeze and deliver a DDT for the win to become the NEW NXT Tag Team Champions. The Mystery Man comes out to celebrate with Lorcan and Burch and is revealed to be Pat McAfee getting his revenge on Undisputed Era.

The #UndisputedERA’s past has come back to haunt them!@PatMcAfeeShow is back, and he's celebrating with the NEW NXT Tag Team Champions @ONEYLORCAN & @strongstylebrit! #WWENXT pic.twitter.com/xpsfFiLxke