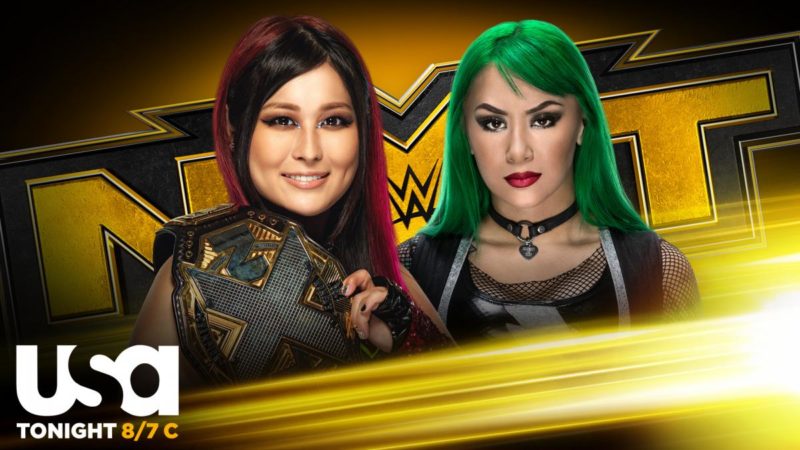 It’s Wednesday which means that we have NXT results for you here at Wrestling Edge. Two title matches feature tonight including Shotzi Blackheart going for the NXT Women’s Championship. And earlier it was confirmed that Wade Barrett is an official member of the NXT commentary desk. WWE also announced the next date for NXT takeover, October 04, 2020.

We are opening the show with the Women’s championship match. Both women start off the match with a bit of one-upsmanship, balancing offense with athleticism. Match heads to the outside with Shotzi attempting to deliver a kick through the ropes but Io delivering a moonsault to the outside.

A ton of action throughout the picture-in-picture and when we return from the break Shotzi gets a lot of opportunity against Io including a very close near fall. The match is a lot of fun and both women are giving their all, Shotzy nearly taken out with a german suplex on the apron. Io gets the win and retains her title with a moonsault.

Denzel Dejournette is now known as Desmond Troy which is much easier to spell. Desmond doesn’t get an entrance, so clearly he’s being fed to Ciampa. It’s a very short match with Ciampa being brutal and getting the easy victory. Following his match, Jake Atlas comes out to address Ciampa and say that next week he gets his revenge for the beating their last meeting.

Next week… you may find out just how dangerous he can be. #WWENXT pic.twitter.com/Hingcxy4tZ

Austin Theory comes out to talk about his prowess and issuing an open challenge for anybody in the back. KUSHIDA answers and comes out agressive, continuing his attack until the bell rings. Theory doesn’t get a chance to answer as KUSHIDA maintains his attack and gets the win with a Hoverboard Lock. KUSHIDA refuses to release the Hoverboard Lock inititially, but the Ref is able to get him to let go as he stands with a fire ignited.

If you don't know… now you know. This is the new @KUSHIDA_0904. 😳#WWENXT @austintheory1 pic.twitter.com/w9nTJoBI9d

Candice cuts a promo about next week where there will be a Women’s Battle Royal to challenge Io Shirai at Takeover. While she is talking about her plans for Tegan, Johnny is busy buying a TV saying he’ll bill Tegan for it and as such puchasing the most expensive possible.

.@JohnnyGargano IS going to get a new TV, and he's going to fit @TeganNoxWWE_ with the bill.

Imperium come running out, starting the attack as soon as they can. There are no shenanigans on Breezango’s side as Imperium utilize their perfect tandem offense to isolate Fandango from Breeze. This strategy backfires  as when Tyler Breeze is eventually tagged in he is a house of fire being completely fresh against Imperium.

This match for the #NXTTagTitles is absolute insanity! 🔥 #WWENXT pic.twitter.com/VsqSg48dak

The match rolls on due to the resilience of Fandango, though Imperium doesn’t pull back their ferocity at all. Breezango is able to retain when Tyler Breeze hits a Rana pin on Aichner thanks to a well placed dropkick by Fandango to stop the Doomsday Device.

Cater and Catanzaro show a great affinity for tag teamwork. Xia Li gets better every time she performs, and this is a good feature for Kamea who hasn’t spent much timefeatured on NXT TV. Cater seems to be the star of this match, carrying most of the action throughout, and Kacy/Kayden get the win with a dropkick crucifix bomb combo with a roll-through clutch pin. When a handshake is offered Xia Li leaves without acknowledging them.

Throughout the night Killian Dain has emphasized that he will not be coming out to team with Maverick in their match tonight. This seems to be what happens as the match begins as essentially a Handicap match. Maverick able to operate with his head on a swivel, trying to prevent UE from taking advantage of his situation. They cut backstage and show us Killian Dain backstage watching the match as Maverick tries to survive the onslaught.

General Manager William Regal approaches Dain backstage about not participating in the match, and Killian Dain reluctantly goes out to the ring. He shoves Maverick into the ring saying if he’s going to lose, take it like a man. Undisputed Era then mock Killian Dain, causing him to enter the ring and beat down both of them. The match is ended with a disqualification when Bobby Fish hits Killian Dain with a chair. The two faces clear the ring, but Dain then once again punches Maverick leaving him lying.

There's no way @KillianDain is gonna show up to this matc-

This is Damien Priest’s first defense of the NXT North American Championship. This is billed as a battle of styles, with Thatcher going fo ra more traditional ground based style. Thatcher is perfectly equipped to counter the offense of Priest and uses every opportunity possible to target the joints of Priest. Priest is able to hit Thatcher with some perfectly placed strikes,  utilizing the length of his limbs.

Priest gets the win with The Reckoning, successfully defending the North American Championship.