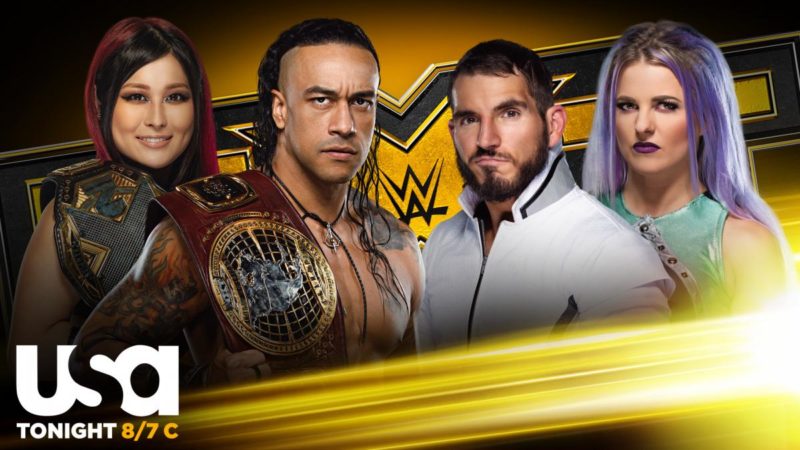 Welcome to Wrestling-Edge.com’s results for WWE NXT on September 30, 2020. This episode features previews for Takeover 31 matches.

Raquel Gonzalez is accompanying Dakota Kai for this match, facing off with Shotzi pre-match. Pretty technical opening between the two with Blackheart ending up in control the majority of the time and using a unique bridging clutch attack.

Gonzalez gets on the apron to distract Shotzi which allows Kai to hit a surprise backbreaker. Kai is great at catching Shotzi for strikes but Shotzi throws her entire body into attacks to get the edge back. There’s a prolonged fight on the apron and Shotzi tries to do a corner spot and it looks NASTY as Shotzi lands right on her neck. It’s stunning but Shotzi gets in the ring, and when Raquel interferes Rhea Ripley comes out and attacks her. As Raquel chases Rhea Shotzi is able to roll up Kai for the win.

Santos Escobar and Isaiah “Swerve” Scott  are in separate rooms with purple having an interview about their upcoming match. It’s incredibly well done with both competitors seeming emotionally invested and sincere. Swerve criticizes Santos Escobar for cheating at every turn while Escobar maintains he’s upheld tradition.

There’s a great package showing Kyle O’Reilly talking about his history in wrestling and what fighting Finn means to him. It’s wonderful to see that he has the full support of Undisputed Era, and I don’t know how much WWE’s editors get paid for these packages but it isn’t nearly enough.

"Even if I never made it to #WWENXT, even if I was still wrestling for 5 dollars every other weekend, I would still be doing it with everything I 𝘩𝘢𝘷𝘦 and everything I 𝘣𝘦𝘭𝘪𝘦𝘷𝘦 𝘪𝘯." – @KORcombat 💛🖤 pic.twitter.com/EqK8DGx6GV

There’s an update on Tegan Nox talking about her torn ACL and the Garganos say that it was pure karma. Their focus thoughis becoming the first married NXT champions.

"She breaks my TV, you tear her ACL." – @JohnnyGargano on @TeganNoxWWE_'s recent injury.

Cameron Grimes has hand selected opponents to show off his prowess. The first opponent comes out who was incredibly small and is taken out with one hit. Ridge Holland beats up his next opponent and comes to the ring to headbutt Cameron Grimes and dominate him. The match is disqualified as Ridge Holland refuses to ease off the attack on Grimes.

Prior to this match there’s a video package where KUSHIDA talks about his new vicious side coming out. He demonstrates it in this match against Nese leaving the former Cruiserweight Champion few openings. KUSHIDA is also able to show off his grappling prowess constantly attacking the arm of Tony Nese and winning with the Hoverboard Lock.

Following the match the arena turns purple and Velveteen Dream shows up on the big screen to guarantee he’ll perform at his best Sunday.

Adam Cole comes out talking about Undisputed Era’s dominant performance in NXT the past 3 years and their respect. Cole calls out Austin Theory who cut a promo earlier about Kyle O’Reilly and challenges him to say what he said to his face. Theory comes out and the two have a match.

Adam Cole is clearly upset with Theory and aims to punish him for his transgressions. Theory is clearly outclassed with Cole taking him out of the ring as well, then continuing to beat him everywhere he can. There are no openings for Theory, Cole not even trying to get a win, just attacking the young superstar.

To say @AdamColePro has a chip on his shoulder right now is an understatement, but the former #NXTChampion is all fired up because of it!#WWENXT pic.twitter.com/uMV2nFeReA

The battle is prolonged and Theory gets in some offense, but it is Adam Cole who is victorious with a Last Shot. Adam Cole uses his post-match camera time to put over Kyle O’Reilly and endorse him for Takeover 31.

Some smooth grapples to open the match and the pace is quite quick with both getting close chances at pins. Li eventually rolls out and brings carter out with her. XIa Li turns up the aggression but it’s Kayden Carter. Following the match Xia Li shoves Kayden Carter in frustration.

The face to face seems to start off respectfully enough with a handshake. HBK puts over Kyle O’Reilly but Finn question’s Kyle O’Reilly’s ability to win this match without Undisputed Era. The two of them are incredibly tense in addressing each other and both seem quite confident heading into their Takeover match.

With @ShawnMichaels overseeing all of this, the exchange of words between @KORcombat & the #NXTChampion @FinnBalor is giving the #WWENXT Universe goosebumps!

The @WWENXT Championship is on the line THIS SUNDAY at #NXTTakeOver 31! pic.twitter.com/IxdMPwn4wo

This mixed-tag match has the two contenders face two champions that they’ll face Sunday at Takeover. As the champs enter the ring the challengers attack before Io and Candice start the match. The two have an intense battle before Gargano tries to block Shirai from Candice, though Priest enters the ring to attack Gargano. Cool spot as Shirai uses Priest as a diving platform.

The Garganos are able to combine underhanded tactics with practiced technique in order to get an edge against the champions. Io able to get multiple shots in on Johnny Gargano, who is constantly trying to protect his wife, including hitting her moonsault on Gargano before tagging in Priest. As Priest tries to deliver his finish Candice kicks Priest in the ding-ding allowing Gargano to land a springboard DDT for the win.

After the match Johnny brings in the titles and they each hold the North American and Women’s Championships as they lift the titles above their beaten opponents.

.@JohnnyGargano & @CandiceLeRae got the win tonight on #WWENXT, but could the @WWENXT Universe see the first-ever husband and wife dual champions in NXT?!