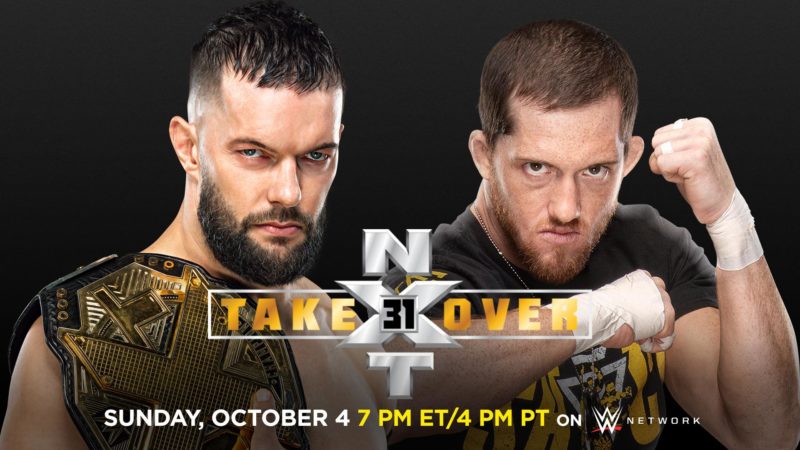 Happy Sunday and welcome to the coverage and results for NXT TakeOver 31. They will debut a re-designed WWE Performance Center, renaming it the Capitol Wrestling Center. Paying tribute to this there is an excellent opening video package celebrating the history of Capitol Wrestling Corporation.

Gargano is aggressive in the opening of this match, but Damien Priest is able to use his strength and size advantage to prevent Gargano from maintaining attack. Johnny finally finds an opening to attack Priest at the knees and uses leverage on the outside to gain momentum. Gargano throws Priest both into the chain-link wall and steel steps. While Gargano continues to isolate the knee to try to gain the advantage Priest uses the length of his limbs to dominate. Despite receiving a Broken Arrow Gargano is able to kick out and stay alive.

Will "JOHNNY TAKEOVER" regain the #WWENXT #NATitle or will @ArcherOfInfamy have all the reason to celebrate?@JohnnyGargano brings the innovative offense at #NXTTakeOver 31! pic.twitter.com/yHGgcDbunK

Priest is able to outsmart Gargano and hesitates slightly when going for a springboard kick in able to land the attack. Gargano tries to take the fight to the outside but Pries is able to maintain his focus and use his environment as a weapon. Though Gargano goes for multiple holds but Priest always has a way to hold him back. Priest flies over the ringpost, but when Gargano pulls security in the way the ref sends for medics. This gives Gargano an opportunity to deliver a low blow and get the upper hand against the champion. Priest survives Multiple attacks but teeters on the edge of being slammed onto the steel steps. He catches Gargano and delivers The Reckoning to the challenger to retain his title.

Velveteen Dream keeps up the mind games by dressing as Doc Brown, but KUSHIDA starts the attack immediately. KUSHIDA seems to have no time for Velveteen Dreams’ games, using his speed and agility to land well-placed strikes. KUSHIDA even catches Velveteen Dreams’ arms in order to maintain a grapple and attack. Velveteen finally finds an opening to toss KUSHIDA around the ring, constantly referring to him as “Marty.”

Don't question that AGGRESSION!@KUSHIDA_0904 is READY to go at #NXTTakeOver 31! pic.twitter.com/qdNgGFcwF8

Dream tries to put KUSHIDA to sleep, but he’s able to escape and uses speed to counter Dream’s attack. He pulls dream through the ring to the buckle and crushes Dream’s arm between teh steps and ring post. When Dream goes for the Purple Rainmaker KUSHIDA catches his arm and gives a cross arm-breaker, though Dream escapes to the outside. There are outstanding exchanges as Kushida places a Hoverboard Lock, and Dream tries to reverse it into a Dream Valley Driver though in doing more damage to himself he taps. KUSHIDA wins big at TakeOver but continues the attack after the match targeting the left arm of Velveteen Dream.

This is another fast-paced Cruiserweight match. Commentary does a lot of the heavy lifting, mentioning that Swerve is the only person to beat Santos Escobar since his debut.There is a lot of really cool action in this match with Swerve using intelligent aggression with a variety of strategy. Santos Escobar dives to the outside and it soudns like he domes himself on the chain link metal. Escobar uses jaw-jacking aggression and ends up firing up Scott, being left dazed following retaliation. Swerve hits a rolling thunder Flatliner but Escobar kicks out and also survives a draped corner DDT.

The #WWENXT Cruiserweight Title is on the line at #NXTTakeOver 31 as @swerveconfident is making the absolute MOST of his opportunity against @EscobarWWE! pic.twitter.com/AZxoLYT48y

Legado Del Phantasma come out to interfere but Swerve fights them off and ranas Escobar onto them, though he lands just fine. Ashante Adonis comes out and clears out Legado Del Phantasma for Swerve, but once Scott is back in the ring it seems Santos Escobar is in full control. When he goes for a frog splash it doesn’t connect, so Swerve delivers an arnbreaker, superkick, and 450 but Escobar kicks out. Escobar manages to land Swerve onto an exposed turnbuckle and deliver a double underhook gutbuster for the win. Escobar retains his title.

Both women are agile and aggressive, using their full bodies to attack and utilizing the space allotted them by their environment. A lot of energy throughout this match, with Candice getting increasingly aggressive with Io and putting space between them to taunt. LeRae maintains dominance until Shirai manages to dodge the turnbuckle splash and senton. It evens out as both women get a chance to go on the offensive though Candice gets a two count with a Lionsault. Io manages escape a Garga-No Escape from Candice and she elbows the ref knocking him away. Io tries a moonsault but Candice blocks causing Io to knock the ref out of the ring. Gargano comes out to help his wife in a Ref Shirt and despite a very fast count it’s only 2. Johnny tries to distract the ref while Candice uses the belt to knock out Io, but Io kicks out and manages to hit a Spanish Fly and Moonsault for the win to retain.

An unexpected special guest referee in @JohnnyGargano attempts to secure the #WWENXT Women's Championship for @CandiceLeRae at #NXTTakeOver 31! pic.twitter.com/jdz5UUsP18

After the match Toni Storm comes onto the screen to talk about her return to NXT and after that a motorcycle pulls up to reveal that Ember Moon has also returned.

Undisputed Era walks to gorilla with Kyle O’Reilly and all wish him luck before he walks out.

The match starts grapple-heavy, with the two men not giving each other space. The two have rarely left the mat early in this match, though eventually O’Reilly begins to land strikes on Balor. Balor retaliates in kind, stomping O’Reilly with precision. O’Reilly finds an opening to use a brief amount of momentum to land some shots with a beautiful Regalplex, and is fighting through the pain from an earlier kick. KOR’s endurance is on display as well as creativity as he shifts from attacking the elbow to attacking the knee.

The #NXTChampionship is on the line as @KORcombat challenges @FinnBalor in the BIGGEST match of his career at #NXTTakeOver 31! pic.twitter.com/SLPzcWu1cj

Finn seems focused on making Kyle O’Reilly suffer throughout the match, and despite constant attacks KOR finds a few momentary opportunities for attack. Kyle O’Reilly manages to kick out of the 1916 and continue attacking Finn’s knees on the rope and off the turnbuckle, nearly getting a submission. After a valiant battle, Finn wins with a Coup De Gras, both men left bleeding from the mouth and drained form intensity.

INCREDIBLE MATCH from START to FINISH.

After the match Ridge Holland is outside the ring carrying Adam Cole on his shoulder and dumps him over the rail while staring down Finn Balor and Kyle O’Reilly.