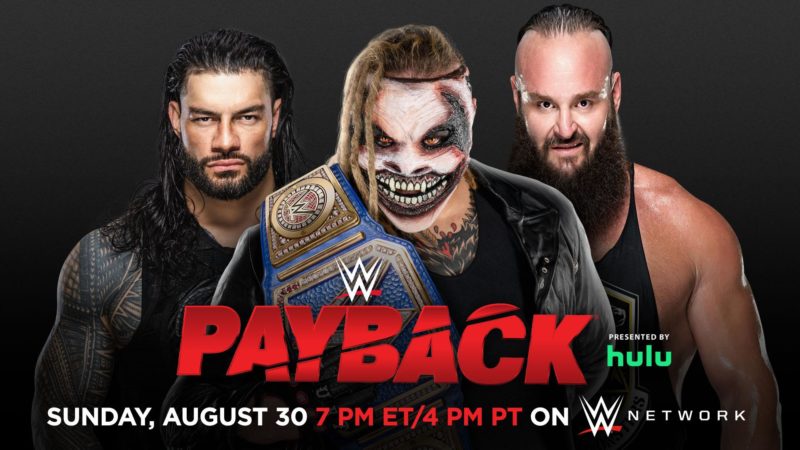 Happy Sunday, Wrestling Edge! It feels like SummerSlam was only last week, likely because it was. In spite of this, yet another PPV is on our screens tonight as WWE presents Payback.

Both teams are in matching gear, like proper tag teams.  There does still seem to be a bit of apprehension between Ruby and Live as Ruby is hesitant to tag her in initially. The Iiconics also try to play mind games against Liv and Ruby, convincing Liv that Ruby is attacking her throughout the match.  Liv tags in and fires up and unleashes an assault on Peyton Royce.

After Ruby survives Deja Vu, the Riott Squad wins with a Riott Kick and announce after that they are, indeed, back.

Lashley is joined ringside by The Hurt Business.  The match begins grounded with Apollo trying his best to out-grapple Lashley.  Quickly Apollo attempts to press his advantage by using his agility against the superior strength of Lashley.  Lashley is able to kick out from both a moonsault and frogsplash from Apollo, as well as enduring a surprising barrage of strength from Apollo.

Lashley becomes NEW United States Champion when he finally locks in the Full Nelson with body scissors. There’s a brief scuffle between all four men, but it looks like the battle will continue between Apollo and The Hurt Business.

Keith Lee is backstage preparing fo rhis mac, and his fellow Texan JBL pays him a visit with investment information and some advice.

Aggressive start from both competitors, neither really having an obvious advantage in size, strength, or speed. Sheamus eventually isolates the knee of Big E, keeping him off of his feet. Sheamus is in control of the majority of the match, dictating the pace through his offense on Big E. A combination of lightning-fast strikes and technical prowess afford Sheamus quite a few opportunities to seal the deal though Big E survives all.  Sheamus tries to end it all with the Brogue Kick, but Big E catches him for a spinebuster and Big Ending for the win.

To add some drama in this match, they bring up this tweet from earlier which appears to be quite a pesonal attack

Tonight, I prove that Matt Riddle is a failure in a WWE ring.
By the way…he’s already proven that he’s a failure at home. #WWEPayback

Matt Riddle attempts to use his superior technical skill, trying to submit King Corbin quickly. Corbin returns with his surprising bigman agility as well as some well placed strikes.  Riddle can’t seem to find a way to be dominant despite his early lead and passionate response.  Riddle is eventually able to overcome a Deep Six and land a “Floaty Bro” to get the win on Corbin.

The victory is short lived, however, as Riddle is attacked by Corbin while doing a backstage interview near catering.

Baszler and Banks start off the match and Baszler is masterfully working the limbs of Sasha.  Once Bayley tags in, the two are able to isolate Shayna to work her over outside of the dominion of Nia Jax.  Interesting breakup of a cover as Nia throws Sasha into the ring to break up a pinfall before she ragdolls The Boss.

Which team is walking out with the Women's Tag Team Titles?? #WWEPayback pic.twitter.com/kBJmqxWtGx

When Bayley and Sasha get Nia into the ring the strategy continues of trying to keep her away from Baszler, but Nia is able to counter with pure power.  Banks and Bayley nearly get the pin with an elbow drop frog splash combo, but Nia is able to stay on her feet.  Shayna is able to get both women into a submission as she puts Banks in a Muta Lock and Bayley in a Kirafuta clutch, using their limbs against each other and forcing Bayley to tap out.  Nia and Shayna are the NEW WWE Women’s Tag Team Champions.  Outside of the ring Sasha Banks looks quite distraught.

Just to get it out of the way: I’m also not a fan of the Keith Lee music change, but at least they kept the intro, which is the most important.  The two start strong with Randy managing to land the loudest chops I’ve ever heard off a T Shirt.  Randy Orton also performs a feat of strength by hoisting Keith Lee high enough to drive him through a table.  But Keith Lee wins a short match after hitting Orton with a Spirit Bomb out of nowhere.

Dominik immediately goes after Rollins when the bell rings, and shows off some pretty good lucha things against Murphy. Continuing his impressive performace in only his second WWE Match, being all over Murphy but not quite getting the jump on Rollins.  Messiah and Disciple are able to maintain an attack on Rey, and they do a great transition catching Dominik’s crossbody and turning it into a Falcon Arrow.

The action through the match is insane, getting plenty of time and showing Seth sadistically picking apart Dominik in order to torture Rey.  However Rey reverses an attack from Seth in order to force Murphy to attack him, leaving an opening for Dominik to win the match with a 619 and Frog Splash on Murphy.

The Fiend makes his entrance, but does not get to finish as the lights come on to reveal Braun is already in the middle of the ring attacking Fiend.  It isn’t long before The Fiend pulls out the comically large mallet, but Strowman responds by throwing a chair. Throughout the beginning they also cut back to Alexa Bliss watching backstage.

The match moves around the area, to the stage and having Braun tackle The Fiend off the stage through a table. Braun drags The Fiend through the Thunderdome, but as the match continues there is still no sign of Roman Reigns.  Strowman goes to the top rope, but The Fiend hits a superplex and the ring collapses.

As it does, Reigns comes out with Heyman and a Steel Chair, signs the contract, and runs down to the ring.  He goes to make the pin, but there is no official, and by the time an official comes down both men have recovered. Though The Fiend tries to get the Mandible Claw on Reigns, a quick trip to Dick Kick City prevents the move reaching completion.  Reigns lands a spear on Braun for the win and celebrates on the top of the ramp with Heyman as the NEW Universal Champion.