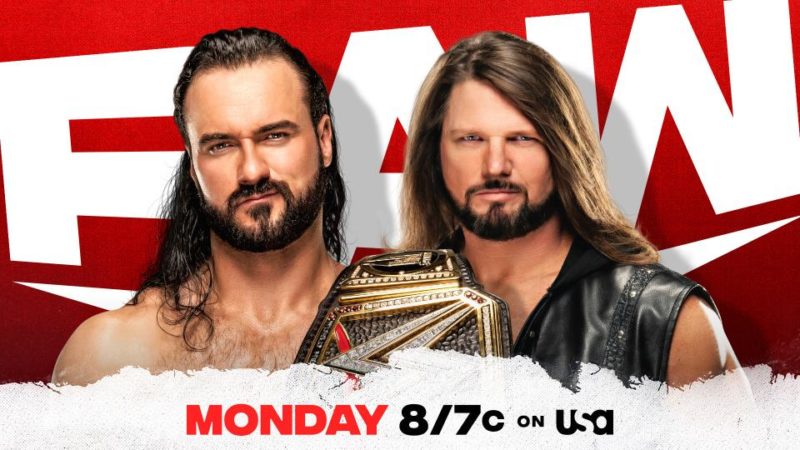 Welcome to Wrestling-Edge.com’s results for WWE Monday Night Raw on December 14, 2020. This episode features a face-off between AJ Styles and Drew McIntyre ahead of TLC. Also on this episode, Bray Wyatt takes Firefly Fun House on a field trip.

The show kicks off with The Dirt Sheet featuring Miz reading “The Nightmare Before TLC.” The ring is decorated with a Christmas Themed TLC setup, and small detail in Santa on the book being based on Foley. Morrison is dressed as a Wiliam Wallace-based Drew McIntyre facing off with AJ Styles who murders him with the sword.

Miz also reveals his contigency plan to cash in on Drew if AJ should fail. Sheamus comes out and challenges AJ to take part in their match immediately.

They announce that the match for the WWE Championship will be a Ladder Match at TLC. Sheamus maintains control but keeps an eye on Omos in case of any shenanigans. The power of Sheamus is on full display, though AJ has the edge when it comes to technique.

AJ successfully targets the knee of Sheamus, keeping him off his feet and forcing him to endure pain with his offense. Sheamus manages to hit White Noise, but AJ kicks out as Sheamus struggles to walk. AJ puts Sheamus away with a Phenomenal Forearm getting his win in before TLC. As he tries to jaw-jack Sheamus, he pulls him into the ring, but Sheamus gets tied upside down in the ropes. AJ beats him with a chair before departing.

The New Day/Jeff Hardy vs The Hurt Business

Riddle positions himself as “Bro E” to assist the babyfaces from ringside. MVP stays ringside as he’ll face Riddle later tonight. The match maintains constant action between all competitors, giving the feel of a high pace.

The Hurt Business finally find a way to isolate members of the babyface team using blind tags and the strength advantage of Lashley. Hardy finds his ground but Lashley lets Cedric get hit with a twist of fate while blind tagged. This allows Lashley to get in and eventually lock Hardy in The Hurt Lock to get the win.

Lana admits her fear of Nia to Asuka heading into the match, and it looks like Lana is heading out to the match on her own. Nia easily dominates Lana early in the match, but a few smart moves from Lana allow her to pin Nia getting the shock victory. After the pinfall, Shayna attacks Asuka backstage and Nia targets Lana’s knee, consistently attacking her. Eventually Asuka is able to make her way to the ring to make the save on Lana who has had her joints destroyed.

Was it worth it? Probably not. pic.twitter.com/YhMK5vxTFx

Elias is in the ring with his guitar, and reveals that he is joined by Jaxson Ryker making his return. He claims that he has been transformed by the music of Elias, though R Truth interrupts to apologize for interrupting on Main Event. The 24/7 train comes rolling through and are wiped out by Jaxson Ryker.

Miz and Morrison try to get the jump on Keith Lee by attacking him simultaneously from the beginning. Eventually Keith Lee manages to isolate the competitors though he is briefly put down by a tenacious Morrison. Lee recovers and pounces Morrison out of the ring.

Mercy the Buzzard, Huskus the Pig Boy, and Ramblin’ Rabbit are ringside watching Bray talk about Randy Orton. He starts telling terrible popsicle stick jokes, but Orton pops on the Titantron and challenges Bray to a game of Hide and Seek. Bray accepts and Orton challenges him to come find him.

Let the games begin!@WWEBrayWyatt and @RandyOrton are about to play a little hide-and-seek… #WWERaw pic.twitter.com/y9UZChd2U1

Mustafa Ali and the rest of Retribution are ringside with Ali on Commentary. The match is short and despite Ricochet having the early advantage, with Mace getting the win and Ali coming in to chastise Ricochet.

"This doesn't end until I say it ends! And it ends when you JOIN #Retribution!" – @AliWWE #WWERaw pic.twitter.com/DRVzFTmvZ1

Another short match which serves as an excuse for Shayna and Nia to get disqualified and jump Dana to assert their dominance. This allows Mandy Rose to come out with a kendo stick for the save.

Bray searches backstage for Orton, running into Riddle who is useless. He finds a Rocking Chair and once he sits in it Orton attacks him, trying to set him on fire in a crate, but The Fiend appears getting revenge on Orton.

The match is incredibly short as Riddle quickly gets the win over MVP with the Floaty Bro.

Drew and AJ come to the ring, and both put over their opponent ahead of TLC. As the Belt is raised to the rafters, AJ suggests that perhaps he won’t only have to face him in a TLC match this Sunday, and Miz and Morrison begin attacking Drew. Drew fights off the three men but is distracted by Omos, allowing AJ to hit a Phenomenal Forearm. Omos brings a ladder into the ring and AJ brutalizes Drew with it, leaving him lying