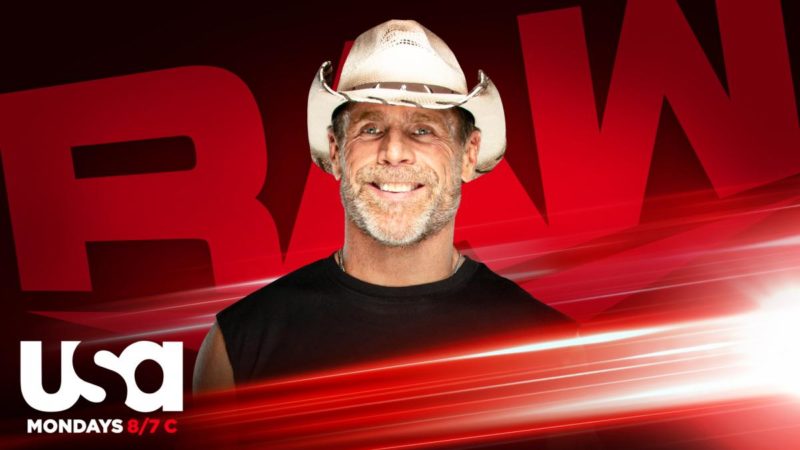 The show starts out with glitches during the “Then, Now, Forever” opening.  I’m unsure if this means we are getting a return to the Hacker or if this is going to be a brand new storyline.  Actually it probably has to do with Retribution.

Drew McIntyre opens the show to address the WWE Universe and Randy Orton. Following a recap video, Drew admonishes Randy for his attack on Ric Flair last week.  During a really good promo we get production glitches as Retribution has taken over the production truck and cut to commercial.

There’s a gathering of the midcard faces backstage, with Drew McIntyre interrupting them to address the situation with Retribution.  Seth Rollins cuts in to talk about lessons he imparted to Drew and Dominic Mysterio.  Ricochet and Cedric Alexander reveal that Rey Mysterio is supposed to be at Raw tonight to confront Seth.

Looks like @DMcIntyreWWE has a big problem with @WWERollins amidst all of the chaos tonight on #WWERaw! pic.twitter.com/kOl6DA5xWo

The Hurt Business makes their way to the ring, MVP leading the charge in his suit. MVP calls out Retribution and claims The Hurt Business is ready for war, also suggesting Apollo Crews as the leader and brainchild behind Retribution. Apollo comes out to answer the claim, entering a dueling promo with MVP about the importance of the US Title.  Apollo suggests a stipulation for tonight’s match that if Apollo beats Shelton, he and Bobby Lashley will be banned from ringside at Summerslam.

There’s a brief battle ensues between Apollo and Shelton but Shelton gets distracted by R Truth and Akira Tozawa, allowing Apollo to pin Shelton.  The Hurt Business begins to beat down Apollo, but Mustafa Ali, Cedric Alexander, and Ricochet run in to make the save.  While outside, the ring, Shelton is able to quickly hit R Truth to win the 24/7 Championship.

War of the Rose and Turkey Leg

Angel Garza is backstage with the Demi Burnett from the Bachelor while Ivar offers her a Turkey Leg in order to get her to join him for Raw Underground tonight.  Garza knocks away the Turkey Leg, and it turns out that Ivar can use the force to retrieve a new one before beckoning Garza to their match.

The two seem evenly matched, and Demi is watching backstage, though Angelo Dawkins joins her shortly after.  The two continue the match and Ivar seems to have the advantage until a distraction from Zelina and Andrade allows Garza to get the win.  Angelo Dawkins cuts through on the video monitor with Demi Burnett and invokes both Charli and summons a mystery video.

Samoa Joe has prior knowledge of the security video and states that it will be quite revealing to Zelina.  Dawkins plays the video as Zelina’s crew comes backstage and it reveals Zelina did the poisoning. Zelina deflects and accuses Charli of being jealous of Garza and Demi.  As Dawkins confronts them, Montez Ford comes out to get his share of the Smoke.

Mickie James is back for her first match in over a year facing Natalya.  Mickie tries to get Lana out of the way but Natalya able to capitalize.  The match is interrupted by Seth and Murphy on the sidelines confronting Joe, while Mickie and Natalya takes place in the background.  The focus remains on the confrontation of Seth Rollins while Mickie is unceremoniously counted out due to Lana interference.  While Mickie does get the last hit on Lana after the match, she deserves so much better for her return than being background noise.

Sasha and Bayley come out talk about their matches Sunday with Asuka.  Apparently both think they’re ready for Asuka. Bayley offers to wrestle Asuka first so that Sasha can glide to an easy victory afterward picking up the pieces.  They redirect their focus to their Tag Title match at Payback and question who their opponents will be.

Shayna interrupts the duo, claiming to be next in line for the Raw championship.  Asuka walks down cutting a passionate promo in Japanese, ready to face the duo and team with Baszler for the match. A Wild JNia Jax appears, punching away the hockey glass and getting in a brawl with Shayna.  Somehow there is no DQ despite Baszler being attacked.

Asuka continues to valiantly battle without her partner, holding off the assault by Sasha and Bayley.  Asuka eventually gets caught in the Banks Statement, but Shayna re-appears to make the save and continue the battle.  Shayna is able to secure the win with a Kirafuta Clutch on Bayley while Asuka has Sasha outside in an Asuka Lock.

Shawn Michaels runs into Drew backstage to try to get his focus on Summerslam so Randy doesn’t win the head game.  Shawn pulls from Drew’s history with him as well, talking about how great of a student he was when coming into the company to drive Drew.

"You haven't let anybody down … The road you've traveled you deserve and you have earned where you're at." – @ShawnMichaels

The Iiconics confront Liv Morgan and Ruby Riott, and Peyton Royce will be taking Billie Kay’s place in the next match. As the Riott Squad walks away, we see Jessamyn Duke and Marina Shafir with Shayna.

The match takes place next and Riott is immediately on the attack, taking the fight outside the ring.  During some outside banter between Morgan and Kay, Royce shoves Riott into Morgan allowing Royce to get the win with her twisting suplex.

Shane McMahon once again presents Raw Underground.  Erik is the first one we see competing backstage, getting an easy victory while Dolph Ziggler watches from the sidelines.  Erik calls out Dolph and the two have the most even matchup so far, but Dolph wins via chokeout, causing Ivar to launch Dolph out of the ring.

Rey Mysterio is back with Dominik, who is lightly holding his gut due to last week’s attack.  Rey is concerned for Dominik headed into his match, but Dominik assures Rey that he knew what he was getting into. It’s a touching family moment which is ruined by Seth popping in via titantron. He berates both Mysterios and delivers ominous messages before coming out to the ring himself.

Rey and Dominic exit the ring with Seth and Murphy at the ready.  While Rey distracts them, Dominik grabs a pair of kendo sticks and begin to return the pain to Rollins and Murphy.

MVP approaches Cedric backstage and attempts to stir the pot by once again offering Ced a chance to join The Hurt Business.

Quick Detour to Raw Underground where Arturo Rua is back being featured in a dominating fashion, able to overcome a much larger Riddick Moss through pure skill.  The fight continues to the outside giving much joy to Shane McMahon.

The Six Man Action begins with Ali and Ricochet joining Apollo Crews against the Hurt Business.  Ali is quickly eliminated with a Dominator, giving the heels the advantage with Richochet not faring much better against a Paydirt form Shelton.

.@WWEApollo looks to make the big comeback in this Elimination Match on #WWERaw and…WE HAVE A NEW #247CHAMPION?!? pic.twitter.com/xlJ7D7Yxlk

Marina Shafir, Jessamyn Duke, and Shayna Baszler are all talking to Shane McMahon backstage, looks like we may get some MMA action in Raw Underground.

A surprise 24/7 match takes place between Akira Tozawa and Cedric Alexander. Quick match ends with Ced winning via Lumbar Check to retain his new title.  Victory is short lived as Shelton hits a Paydirt outta nowhere to get the championship back.

Raw underground is back and before she can finish being introduced Marina Shafir is on the attack securing a quick victory via heel hook.  A wild Nia Jax appears once again to clear out Shafir and Duke, then facing off one on one with Baszler. Nia leaves the ring as soon as the match starts, abandoning Raw Underground.

Andrade and Montez Ford battle in Ford’s return since being poisoned.  The two go back and forth, but when Zelina tries to get involved, Bianca Belair gets involved and lays out Zelina ringside as Ford gets the win via roll-up on a distracted Andrade.

Shawn Michaels comes out and talks about the Ric/Randy exchange from last week.  He talks about Randy taking for granted the experience and mentorship he received, and at the end of the speech, he falls victim to an RKO out of nowhere and Punt in quick succession.

It's @DMcIntyreWWE vs. @RandyOrton for the #WWEChampionship SUNDAY at #SUMMERSLAM!#WWERaw pic.twitter.com/o72qw4kL2D

Orton comes back in the ring for the attack but McIntyre fends him off and leaves him laying behind the commentary desk.  When McIntyre goes back to check on Shawn, Orton is able to run back in with yet another RKO to get the last attack in prior to their Summerslam interaction.