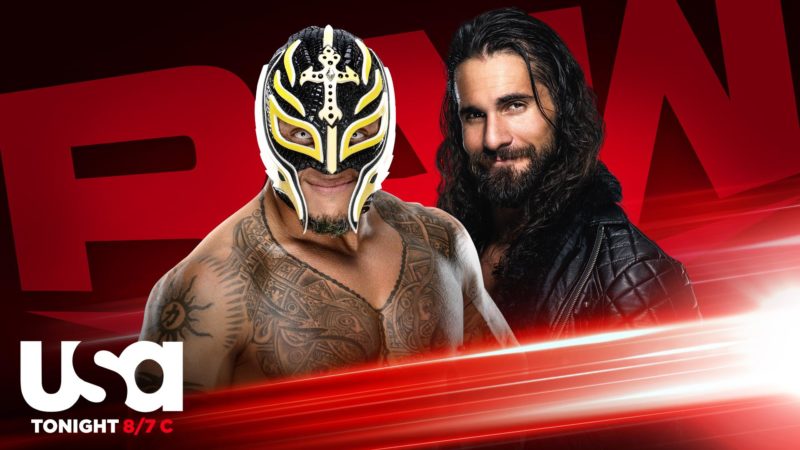 Randy Orton opens Raw addressing his reason for attacking Drew McIntyre. He took Drew’s offer of a rematch as a sign of pity and attacked him for the disrespect. Randy also has terrible Photoshop skills as he shows off his victims in hospital beds.

Keith Lee interrupts Randy Orton’s good time, reminding him of his Payback loss. During his promo, he is cut off by a surprise attack from the person he is fighting later tonight: Dolph Ziggler.

This is one of three matches tonight that will see the winner advance to a triple threat.  The winner of that triple threat will then face Drew McIntyre at Clash of Champions next month. Keith Lee is pure power in this match, forcing Dolph to stick to a pure technique approach in order to bring the big man down. The only times Dolph seems to have a chance is when he’s keeping Keith Lee off his feet, but Keith Lee is the epitome of power and resilience through the match and wins with a Spirit Bomb on Ziggler.

Keith Lee will go on to face the winners of two matches later tonight in the triple threat main event.

Backstage, Nia and Shayna are celebrating their Tag Team victory, though Nia is taking full credit despite Shayna getting the win.  Asuka comes in to break up the tension on her way to the ring.

Quite the meeting of CHAMPIONS on #WWERaw!

Asuka is Ready for Anything

Asuka comes out to address the Raw Women’s title picture. As she says that she is ready for anything, Mickie James cuts her off and shows her respect to Asuka, but stakes her claim. Lana and Natalya then cut off Mickie to present themselves as the future of the women’s division.  Lana and Natalya attempt to attack the other two but are quickly cleared from the ring in tandem.

Asuka joins commentary, but her headset seems to be broken initially. Once the headset is fixed, Asuka puts over Mickie while talking down Natalya and Lana. Lana does seem to show strong improvement in-ring, able to get out of a Mickie T via foot stomp, but takes the fall to a Mick Kick.

A stipulation has been announced for the show later tonight where the Iiconics and Riott Squad face off with the loser disbanding. The winner gets a Tag Team Title opportunity.

MAJOR ramifications coming out of this one…

Winning team? Next challengers for the WWE #WomensTagTitles
Losing team? MUST disband. pic.twitter.com/WQaVkWnUuA

The Iiconics are interviewed backstage and they discuss their upbringing in Australia and history together.

This is the second match to advance to a triple threat tonight. Before the match begins, Aleister Black attacks Owens on the outside leaving him in no condition to fight. Kevin Owens then forces the ref to ring the bell, and despite a few valiant swings, he is eliminated with an RKO out of nowhere. Randy Orton continues to the main event triple threat with no effort.

.@FightOwensFight was AMBUSHED by @WWEAleister and quickly fell victim to an RKO from @RandyOrton on #WWERaw!

The last qualifier tonight will be Dominik facing Seth Rollins, and the entire Mysterio family is backstage in preparation.

The Hurt Business has taken the ring, celebrating the victory that Lashley has earned. They also air their grievances against Apollo Crews, who rejeted them early on. Despite having a triple threat tonight they will also have Shelton face Apollo at Raw Underground.

Cedric Alexander comes out to address MVP, but turns out it’s a trap as the Viking Raiders were lying in wait as they take to the ring  to prepare for their match after a quick attack.

It does seem odd to have Shelton in this match when he also has a Raw Underground bout tonight, but he is one of the best athletes on the roster. Alexander when matched up with MVP does well to advance the story of his Hurt Business refusal. Cedric Alexander is the one who ends up getting the win by pinning MVP after catching a Yakuza Kick. MVP looks pleased with this result and  holds back the Hurt Business as he applauds Ced.

When we come back from break, Cedric Alexander is getting beaten down by The Hurt Business and rescued by Ricochet and Apollo.

The winner of this match gets a Tag Team Championship, while the losers must break up. The teams both fight with great chemistry and tandem offense, and it seems like it would be a shame to have either team break up.

The winning team receives an opportunity at the #WomensTagTitles. The losing team will be NO MORE.#WWERaw pic.twitter.com/vf4mMvpFmn

Unfortunately it is the Iiconics who end up on the losing end as Ruby Riott pins Billie Kay. I’m curious what shenanigans they may use to make this a non-permanent breakup, but it seems quite sad to lose a legitimate tag team in the women’s tag division.

Seth Rollins is accompanied by Murphy, but prior to the match beginning, Rollins runs down Murphy for his failure at Payback and banishes from the ring though he slaps him as he leaves. When the match begins Seth Rollins is taking out his aggression on Dominik, focusing on hurting him rather than a quick win. Dominik puts forward a strong effort, and despite his family watching on the TV backstage, Rollins gets the win with a curb stomp. Rollins is going to the triple threat later tonight, but after Rollins gives Dominik another curb stomp after the match Rey disappears from the viewing area.

It's a #SummerSlam rematch right now on #WWERaw as @WWERollins takes on @35_Dominik with the winner advancing to join @RealKeithLee & @RandyOrton in tonight's huge #TripleThreat Match! pic.twitter.com/CcBRIAPxof

Titus O’Neil is shown destroying some unlucky enhancement in Raw Underground, but when Riddick Moss enters the fray, the fight goes world wide.  Titus is able to throw Riddick Moss out of the ring, but the fight continues.  Despite a strong showing from Titus, Riddick Moss is the last man standing, celebrating over a prone Titus.

Akira Tozawa is in the garage having issues trying to get in. According to a security guard he is not on the list, but upon closer inspection the Security Guard is in fact a Referee and R Truth absconds with his title once again.

This match is Tornado Tag, so it is constant action from all men in the match. Demi from The Bachelor is still out here with Garza, despite kissing Ivar on the cheek earlier. The two teams battle valiantly, but the lights start to blink in and out. Angel Garza takes Demi to safety, leaving Andrade alone with the Street Profits. Andrade and Street Profits battle Retribution when they invade the ring, and Zelina also fights attackers to no avail as all four are left lying while Retribution flees.

Jessamyn Duke is debuting backstage on Raw Underground and makes quick work of Avery Taylor. Afterward Marina Shafir is also challenged to a quick scuffle and wins despite being dressed in summer casual. The Iiconics are back there with Shane and when challenged by Jessamyn and Marina, Peyton throws Billie into the ring and watches as she is destroyed

The main event of Raw Underground takes place as Shelton fights Apollo Crews. Apollo is holding his own against likely the best wrestler on the roster, but when the two fall off the ring, Lashley and MVP get involved with Ced and Ricochet. The three pairings re-enter the ring and all 3 members of the Hurt Business force the babyfaces to pass out.

Also Retribution is still in the building, and although Angel Garza says he’s protecting Demi he changes his mind once Retribution shows.

The winner of this match faces Drew McIntyre at Clash of Champions for the WWE Championship. Seth Rollins tries to avoid action initially, going outside the ring, but soon being brought in by Keith Lee. Keith looks very strong in this opening, able to take an offensive position against the other two competitors.

Orton and Rollins find their groove, with Orton showing off his strength being able to manhandle Keith Lee. Orton tries to take advantage of a distracted Rollins to get a quick pin, but Seth kicks out. Keith Lee comes back to life and charges both men in the ring, even using Rollins as a weapon. Keith Lee looks to have the match won with a Spirit Bomb on Rollins, but an RKO out of nowhere to Keith Lee allows Orton to capitalize on the moment and pin Rollins instead. Randy Orton is facing Drew McIntyre at Clash of Champions.