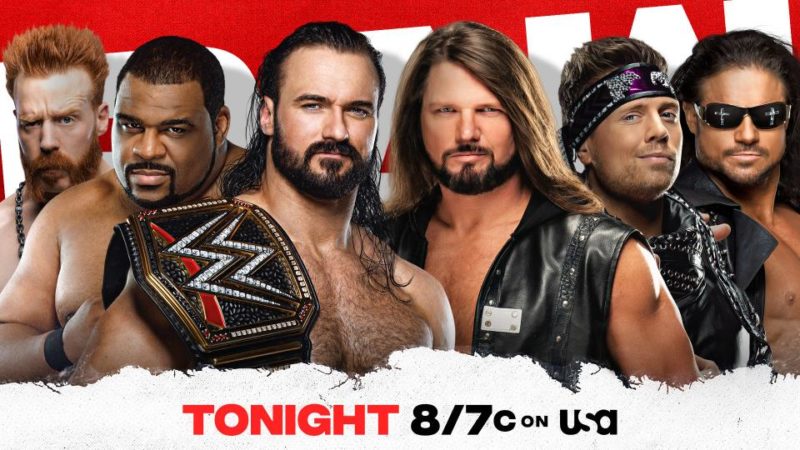 Charlotte Flair comes out to brag about her accolades and introduce her tag team partner Asuka. Asuka is excited about their win and declares that they weren’t ready for Asuka or Charlotte. Nia Jax and Shayna Baszler make their way to the ring and start to threaten Asuka and Charlotte. Dana Brooke and Mandy Rose also come out insulting the former champs and Charlotte brings out a ref so she and Asuka can watch a match between the teams.

Shayna starts with Mandy Rose, and Asuka refers to the duo of Mandy and Dana as “Sexy Muscle Friends.” Nia and Shayna focus on their power advantage while Dana and Mandy work in tandem to assault the former champs.

The former champs recover and continue their assault on Rose and Brooke. Brooke tries to pin Shayna, but Shayna kicks out and locks in a Kirafuta Clutch for the win. After the match they dump Shayna and Nia out of the ring over the rope, teasing the upcoming Royal Rumble.

VIP is hosting an edition of the VIP Lounge celebrating the Tag Team title win of Cedric Alexander and Shelton Benjamin. MVP has hired a photographer so they have the special moment captured, but R-Truth is photobombing them with his title as well in the background. The 24/7 contenders chase around R-Truth before Jeff Hardy and Riddle come out to criticize their celebration ahead of their match tonight.

Angel Garza spends his time in gorilla position flirting with the interviewer and giving her a rose. The action is fast-paced between Gulak and Garza, with Garza agressively striking whike Gulak focuses on grappling. Garza finishes the match with a Wing Clipper for the win.

The Miz starts MizTV by apologizing to his family for failing at his cash-in. AJ gets upset at Miz’s poor decision last night and The Miz launces into an intense promo about his failure to recapture the glory of the previous decade. As a concession, The Miz offers AJ a role in The Marine 7. Omos also speaks and they realize that John Morrison cashed in the contract, not Miz.

Drew McIntyre comes out as Miz is demanding his contract back, and they read a carol that he, Keith Lee, and Sheamus wrote while celebrating last night. There’s a brawl which ends with Keith Lee getting kicked into Sheamus, nearly causing in-fighting.

After break Keith and Sheamus get in an argument backstage but Drew tries to calm nerves betwen the two and let cooler heads prevail.

Ali is saying the beatings will continue until Ricochet joins Retribution. T-Bar has a clear power advantage and Ricochet is trying to fight off T-Bar, Mace, and Ali simultaneously. The distraction of the rest of Retribution is enough to keep Ricochet occupied and allows T-Bar to get the win with a GTS of his own. Retribution stands over Ricochet demanding he join them or be destroyed.

Hardy and Riddle appear to work well together, easily fending off the attacks of The Hurt Business. Lashley focuses on power and MVP takes a majority of the heat for the heels. Hardy is knocked off of the top rope, falling onto the steel steps outside. MVP uses this to take advantage and unleash a flurry on Hardy, who escapes the assault with a Whisper in the Wind. Cedric and Shelton try to provide distractions, but are ineffective. Jeff Hardy ends up trapped in the Hurt Lock, once again tapping out to Lashley.

Elias tries to play minstrel from the top rope watching the match, but Gran Metalik cuts him off, sending him flying. Lince Dorado plays his guitar, but Jaxson Ryker catches Metalik in a choke-bomb and pins Gran Metalik for the win.

Orton talks about his actions and how the voices in his head allow him to sleep at night. Declares that The Fiend is no more and he took him out. The monitors start going out and Orton escapes the ring, but the lights go out. When the lights come up, Alexa is in the ring with a swing, talks about how The Fiend built the playground for her and if he returns he’ll be unlike anything Randy’s seen before.

This match continues the pairing that confuses us to why they split up the Iiconics, once again placing Peyton into a tag team. They’re challenging in order to make themselves noticed as a team, and though their tandem work isn’t perfect they get a few close pins. They have poor communication, with Peyton and Lacey each delivering blind tags. Charlotte gets the win over Peyton Royce with a Figure Eight as Nia Jax and Shayna Baszler watch backstage.

The match begins pretty traditionally, with the action remaining in the ring and the heels targeting the left knee of McIntyre. Keith Lee and Sheamus work well together to clear the ring using their combined power, but quickly start hitting each other in aggressive fashion.

Sheamus, Drew, and Keith continue to work together with Sheamus focusing on manhandling AJ Styles. Morrison manages to through Sheamus from the top rope through a table on the outside. He manages to stay alive in the ring against Miz, but is successfully kept from his partners. McIntyre gets in and is successful in clearing the ring until AJ gets back in with a candy cane kendo stick. The fight starts going through the ringside props with Styles sent through the eggnog bowl.

Sheamus uses a kendo stick to dual Morrison, and despite all three tagging in and out it’s Keith Lee that gets the pin with a Big Bang Catastrophe. Omos sends Morrison through a table and after the match and Sheamus brogue kicks Keith Lee to the chagrin of Drew.