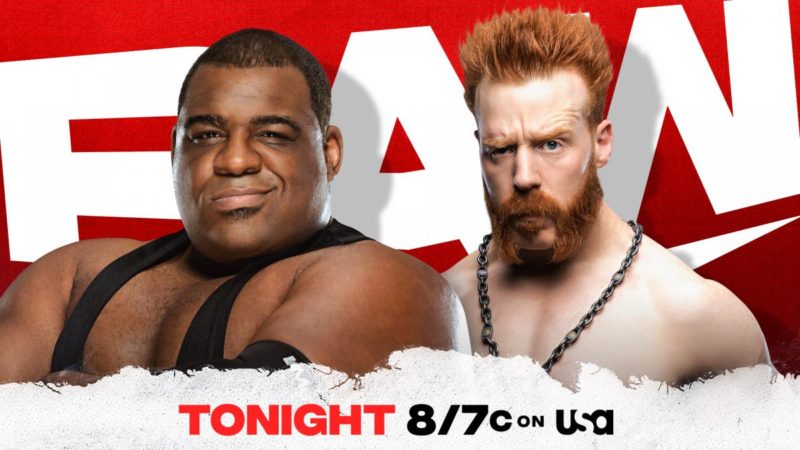 Welcome to Wrestling-Edge.com’s live coverage and results for WWE Monday Night Raw airing December 28, 2020. This episode, Keith Lee and Sheamus face off for the number one contendership.

The show starts with a graphic in memory of Luke Harper. After that, Drew McIntyre makes his way to the ring ready in kilt and gear. He starts his speech with “It’s Monday, you know what that means.” He starts talking about what a crazy year 2020 has been and as he thanks the fans Sheamus makes his way out.

No better way to kick off the final #WWERaw of the year than with @DMcIntyreWWE! ⚔️ pic.twitter.com/kpNH27rydu

Sheamus and Drew start talking about the possibility of a match between the two of them. Though they are quite excited about the prospect, Keith Lee comes out to air his grievances. A ref is called down to the ring and Sheamus attacks Lee with a Brogue Kick before the match can begin.

Drew McIntyre is on commentary for this match. Both of these men have significant size and use it to their advantage as the match takes place all around the ring. Sheamus even flies to the outside, knocking Keith Lee over the announce desk.

The match continues as mass flies everywhere in the ring, but in the end it’s Keith Lee that ends up getting the victory and will face Drew next week for the WWE Championship.

Dana is accompanied by her Tag Team partner, Mandy Rose. It looks like Dana has learned from last week, with Baszler targeting the arm but Dana Brooke finding a way to escape each time. Shayna takes her around the ring, trying to brutalize her arm and also targets Mandy Rose’s arm. Baszler gets the win with a Kirafuta Clutch and leaves both Dana and Mandy lying at the end of the match attacking Mandy when she goes to check on Dana.

Alexa is in the ring on her swing, talking about missing Bray and not seeing him since the Inferno mathc. As she tries to call Orton out, a Firefly Fun House graphic pops up and Orton appears coming in from the Fun House. He starts to destroy the Fun House, throwing Mercy into Abby the Witch and ripping Ramblin’ Rabbit in half. Alexa is furious and challenges Orton to a match tonight in the ring which he accepts.

But @AlexaBliss_WWE wants to see him in the ring later tonight?! #WWERaw pic.twitter.com/c41Eh9ORuB

This match is happening because Elias was interrupting them backstage with his playing, and it seemed to include a staredown between Jaxson Ryker and Omos prior to conflict.

Elias is looking quite strong in this match, able to dominate Styles by targeting his arm. Neither Omos or Ryker are playing a role in this match, letting the two competitors battle each other. Elias gets quite a few opportunities to put AJ away, being in control a majority of the match, but Omos does offer supportive words from ringside. AJ eventually gets the win with the Phenomenal Forearm.

Ali is accompanied by Retribution, who surround the ring as he works Ricochet. The opening is incredibly athletic, showing off the prowess of both men. The match gets a good amount of time, with the attacks balanced between both men. Ricochet manages to fight off all three members of Retribution while continuing to target Ali, but Ali gets the knees up while Ricochet lands a shooting star press and Ali makes him pass out with a Koji Clutch.

After the match, Ali once again extends the offer to Ricochet to join Retribution. Ricochet seems like he may join, but instead hits Mustafa Ali with a Recoil before evacuating the ring.

Each woman is joined ringside by their partners, and Nia keeps charlotte within arms reach for most of the beginning of the match. Flair starts using momentum to counter the size and strength of Jax, As the match goes to the outside, Asuka takes out Shayna and Nia avoids a figure 8 by whipping Charlotte’s head into the corner.

The match continues with Charlotte putting Nia in a figure four, but the bell rings as Nia is disqualified because Shayna locks Charlotte in a Kirafuta Clutch. The two clear the ring as Asuka runs in for the save after Charlotte is declared the winner.

The New Day/Riddle/Jeff Hardy vs The Hurt Business

This 8 man tag is preceded by Bobby Lashley declaring himself for the Royal Rumble. This match lets every member shine, but special emphasis seems to be on Cedric Alexander and Xavier Woods. Though once again Jeff Hardy taps out to The Hurt Lock to give the win to The Hurt Business.

Miz and Morrison are sitting miserable on the steps when approached by Adam Pearce. Turns out that because Morrison submitted the case instead of Miz, the match was invalid so Miz get’s his Money in the Bank contract back.

Alexa makes her way to the ring and calls out Randy. Orton comes to the ring and demands to know where The Fiend is, but Alexa says that it was never about him, it’s about her. She leaves the ring and pulls a present into the ring, unwrapping and opening it. It had a gas can and matches, which she places at the feet of Randy Orton. She challenges Randy to do to her what she did to The Fiend and lays down in the middle of the ring.

When Orton doesn’t move, she makes a trail of Gas to the middle of the ring, standing in it and waiting for Orton to throw a match. She gets up once again and pours a larger circle of gas in the ring, standing in the middle and taunting Orton. She pours the entirety of the gas can onto herself, beckoning him once more. Randy picks up the matches and slowly makes his way to Alexa. As he begins to monologue the lights go out, and Randy lights a singular match as he’s approached Alexa, the show fading off as he looks sinister.

WHAT is @AlexaBliss_WWE thinking?