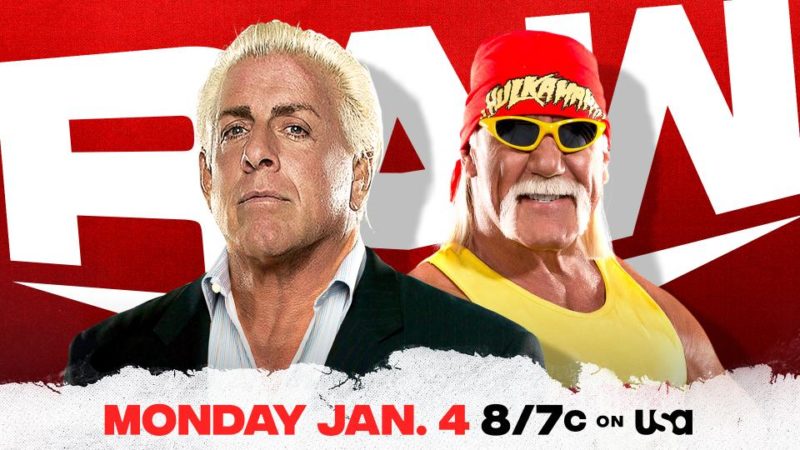 Welcome to Wrestling-Edge.com’s results for WWE Monday Night Raw airing Jauary 02, 2021. Tonight Raw is Legend’s Night so we get an appearance from Ric Flair, Alicia Fox, and More.

The show kicks off with Hulk Hogan peddling the hPhone, which hopefully doesn’t get its contents leaked.

Call your friends and family and tell 'em it's LEGENDS NIGHT on #WWERaw and it all starts RIGHT NOW! pic.twitter.com/QqZ5NKevsb

Miz brings out The New Day  and The New Day take over and start interviewing Miz and Morrison instead. Morrison is fully into this but Miz gets irritated with the shenanigans. Things get heated in the ring but Teddy Long comes out and makes Miz and Morrison face the New Day in a Tag Team Match since the Undertaker is unavailable.

GOOD LUCK, @mikethemiz & @TheRealMorrison, you're gonna have to take on…

The New Day vs The Miz/John Morrison

The match is in progress once we come back from commercial. The match is very balanced and exhibits the athleticism of New Day as well as the sheer entertainment value provided by Miz and Morrison.

Miz and Morrison find their tandem offense and Morrison also throws a lot of weight behind his attacks. Morrison almost gets the cheap pin with the feet on the ropes, but Kofi pushes him off before Xavier hits him with a shining wizard and pins him for the win.

Kiss From A Rose

Angel Garza is backstage and tries to give Alicia Fox a rose to celebrate his 24/7 title win.

She rejects it, since he doesn’t know about the Cranberry Juice Skateboarder. Instead he runs into Mickie James, Tatanka, and SGT Slaughter, giving the rose to Mickie before Slaughter takes it away.

Omos and Jaxson Ryker are accompanying each superstar. Elias has a lot of control against Styles, using his superior size and strength. Omos and Ryker don’t seem to be playing a role on the outside of the ring. AJ Styles is cut off from a Phenomenal Forearm with a knee lift, but Styles gets Elias in a Styles Clash to win the match.

Ryker tries to hit AJ with a Guitar but Omos kicks it right out of his hands, shattering it.

Big Show is backstage talking to Riddle, but Randy Orton soon replaces him and tries to goad The Big Show into facing him later tonight.

Nope, not responding to @RandyOrton's mind games on #WWERaw!@WWETheBigShow is here to enjoy LEGENDS NIGHT, not get in a fight! pic.twitter.com/jrjpiZf6bu

Ric Flair accompanies Charlotte out to the ring, taking advantage of Legends Night. Charlotte gets a lot of work in early on both Lacey and Peyton before Asuka gets in and is explosive on both women. Evans starts jaw-jacking Ric ringside causing Charlotte to slap her and the two continue fighting outside the ring as it goes to commercial.

Peyton tries to corner Asuka, but she’s able to tag Charlotte in. Lacey starts crawling on the apron flirting with Ric which enrages Charlotte. When Charlotte gets back into the match, Ric tries to help by tripping Peyton, but trips Charlotte instead leading to her getting pinned by Peyton Royce. Afterward, she gets in Ric’s face and says to get out of her business

Sheamus is in the back reassuring Drew McIntyre prior to his match. Hulk Hogan and Jimmy Hart find him and give inspiring words while annoying Sheamus.

Riddle starts the match before Lashley can finish removing his title. The aggression doesn’t fully pay off as Lashley able to dominate him, using the distraction of MVP to gain the upper edge. Lashley locks in the Hurt Lock, but lets go when Riddle Taps out although the Ref didn’t see it. As MVP and Lashley argue with the Ref, Riddle is able to roll-up Lashley for the win.

Ricochet is backstage accepting advice from Mark Henry, who is on a knee scooter. Orton appears and berates Mark Henry about his former glory.

Thankfully for @RandyOrton, the Hall of Pain is closed tonight on #WWERaw! pic.twitter.com/fAav6UwttY

Mandy Rose is attacked by Shayna as she comes down the ramp. Dana Brooke runs out and says she’ll take on Shayna in Mandy’s stead. Shayna looks to have an easy win, but Dana manages to steal a win with an awkward roll-up. After Brooke wins Shayna tries to get her in a Kirafuta Clutch but Mandy Rose gives the assist with a running knee. The two women flapjack Shayna and celebrate.

Ric Flair is talking to I.R.S. and Molly Holly backstage, but Orton comes up and the other two disappear as Randy starts talking down Flair about his faded glory.

Orton and Hardy are being quite physical to each other, keeping the wrestling match grounded and simple. It then gets quite intense with Orton taking moments to pick apart Hardy especially using his ears as personal play-holes.

Hardy recovers and hits the Whisper in the Wind, but it isn’t enough when despite countering an initial RKO Randy is able to hit it out of nowhere for the win.

Before the match, Melina is backstage chanting with Lucha House Party.

Cedric Alexander is able to match the agility and athleticism of Lucha House Party. The Hurt Business are easily overcoming Lucha House Party, but start to have dissention in the ranks frequently tagging in and out. Lince Dorado is able to take advantage of this and pin Shelton with a crucifix. MVP dresses them down afterward with it looking like Cedric is abandoning them.

The Legends are onhand to watch the match from the stage. This match is direct with a lot of mass being thrown around the ring. Keith Lee is looking fantastic, quite strong against the Champion. McIntyre also gets feats of strength such as tossing Keith Lee overhead and putting him through the Announce Table.

Lee survives an onslaught that includes a Future Shock DDT, but far more surprisingly Keith Lee delivers a Spanish Fly to Drew McIntyre who kicks out. Eventually Drew delivers a Claymore to pin Lee after a grueling match.

As Drew tries to speak suddenly Goldberg appears. He talks about some perceived lack of respect Drew has for the legends and challenges Drew at the Royal Rumble.