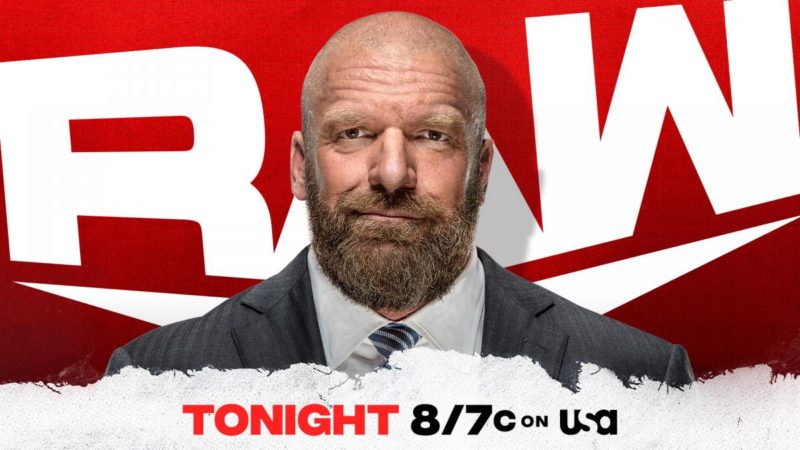 Welcome to Wrestling-Edge.com’s results for WWE Monday Night Raw airing January 11, 2021. Drew McIntyre is out with COVID and Triple H opens the show.

Triple H barely starts addressing the WWE Universe but Randy Orton quickly interrupts. Orton says that one of two things must be happening, either Orton is Number 30 in the Rumble or the new champ. Triple H starts putting over Orton as the legend killer he is, and Orton challenges Trips to a fight tonight. He declines saying when somebody wants you to do something you don’t give them the satisfaction. As Trips is leaving the ring Orton emasculates him, causing him to come to the center of the ring and punch Orton. Orton smiles and takes that as a Yes.

A Message from Drew McIntyre

He sends in a cell phone video to ask everybody to stay safe, mask up, and social distance. This being the most direct COVID messaging WWE has had so far.

“I am one of the fortunate ones with no symptoms, but I assure you, COVID should not be taken lightly.” — @DMcIntyreWWE #WWERaw pic.twitter.com/0Pd2vQHyUH

This match was made because of Lacey’s actions flirting with Ric last week. Charlotte clearly dominates Lacey in the ring, and easily throws her out of it. As she jaw-jacks Ric Flair’s music plays in the Thunderdome and he enters, leaving Charlotte in confusion.

Lacey gets a bit of an edge and starts mocking Charlotte by using Ric’s signatures. She targets the shoulder of Charlotte, though Charlotte gets Lacey in a pinning predicament near the ropes but Ric puts her leg on the rope. As Charlotte demands he go home, Ric helps Lacey get the pin by holding Charlotte’s foot. Afterward Ric escorts Lacey out of the arena.

This was supposed to be a match between Hardy and Elias, but Ryker takes his place instead to prove his loyalty to Elias. It’s a quick match that Ryker wins by holding the tights of Hardy.

Hardy challenged Elias since he distracted him allowing Ryker to get the win. Elias is working injured but Hardy doesn’t target the injury. Hardy cleanly is able to hit moves such as Whisper in the Wind, Twist of Fate, and a Swanton to pick up the win over Hardy.

Lee and Sheamus have a clear advantage over Miz and Morrison with sheer size and strength. This results in the turnbuckle coming undone when Keith Lee splashes Morrison in the corner.

The ring crew is putting the rope back on when the show comes back form commercial. Morrison stays out, nursing his head  while Miz tries to isolate Sheamus from Keith Lee in the corner. Keith Lee gets back in with pure dominance, though Sheamus tags in so he can get the pin with a Brogue Kick.

The two victors have a disagreement over the match finish and the two begin a match of their own.

Both are quite powerful but Sheamus targets the left shoulder of Lee while Lee tries to use his raw strength over Sheamus. Keith Lee gets the win with a Spirit Bomb. Afterward, the two hug in a show of sportsmanship.

They bring up the promo Goldberg cut on Drew last week, with Drew acknowledging he never said nor thought he was better than the legends, but he does accept Goldberg’s challenge for the Royal Rumble.

Kofi Kingston is out of commission due to a broken jaw, leaving him alone while T-Bar is there with retribution. Despite a valiant effort, Woods is easily put down by T-Bar who wins with only slight help from Retribution.

Earlier in the nigh Riddle talked to Lucha House Party about his upcoming match with Lashley. Lashley begins attacking Riddle before the bell rings. Miantaining a continuous assault, Riddle ends up tapping to The Hurt Lock. An incensed Riddle demands to challenge MVP next.

MVP is holding his own against Riddle despite not even being dressed to wrestle. Riddle finds his wind and starts to get offense against MVP, but Lashely interrupts with a Spear, giving Riddle the DQ win. Afterward The two beat down Riddle.

This match is for entry into the Royal Rumble, as ordered by WWE Official Adam Pearce. Drew and AJ are having a technically excellent match, going back and forth between the two. Styles manages to knock Gulak out of the ring and he falls at the feet of Omos, who is a towering, intimidating presence. This allows AJ to throw Gulak back into the ring and win with a phenomenal forearm.

Dana Brooke and Mandy Rose work well as a team, making sure to keep the other from getting pinned when they can. Baszler and Nia don’t have clear communication, but still get the win when Shayna locks a Kirafuta Clutch following a blind tag. Nia looks at Shayna confused and disappointed, but still acknowledges Shayna’s win.

Triple H comes to the ring in a T Shirt and slacks, opposed to his normal gear. Randy is quick to take Trips outside of the ring and try to throw around his opponent. Trips manages to reverse a whip on Randy and throw him into the steps and barricade, opening his cheek. Triple H grabs his Sledgehammer from under the ring and starts to climb the steps, but The monitors start going off around the Thunderdome. Trips is hesitant to hit Randy with the Hammer but when he goes to he lifts it revealing it to be on fire, though Trips disappears from the ring to leave Orton bathed in the purple light with Alexa. She looks at Orton and holds up the “Pain” glove before shooting a fireball directly into the eyes of Orton. He tries to leave the ring, writing in agony.