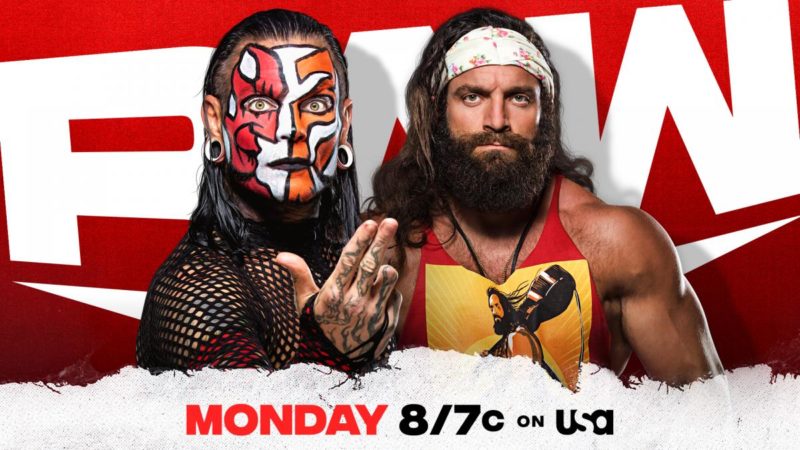 Welcome to Wrestling-Edge.com’s results for WWE Monday Night Raw for November 02, 2020. This match features a “Guitar on a Pole” match between Jeff Hardy and Elias.

The show opens with Randy Orton talking about his WWE Championship win and cementing his accolades. He also warns the Locker Room that he’ll be prepared for anybody though seems surprised when Alexa Bliss walks out. She reveals her own gloves that say “Play” and “Pain” and says that “He can be here.” The music and lighting for The Fiend hit but when the lights return to normal Drew is in the ring and delivers a Claymore.

Miz and Morrison try to cash in the Money in the Bank, but before the match begins Drew attacks them.

WOAH!@RandyOrton just got interrupted by @AlexaBliss_WWE, #TheFiend, a CLAYMORE from @DMcIntyreWWE *and* @mikethemiz cashing in #MITB?!

After the break Miz is clearly irritated backstage and cuts a promo on Drew calling him sore over his loss. Morrison then challenges Drew to a 2-on-1 handicap match tonight.

Jeff Hardy vs Elias (Guitar on a Pole Match)

Before the match Elias cuts a promo talking about the art he’ll make tonight by beating Hardy with the guitar tonight. When Jeff comes out the two begin brawling on the outside, and when Jeff starts to climb to the guitar Elias launches a stool at him. The two continue to battle and Jeff Hardy is the one who ends up with the guitar and hits Elias without it breaking. Jeff Hardy gets the pin and win while Elias writhes on the ground.

Lana comes out to watch the match which happens to have the rest of the members of Team Raw. There are moments where Shayna and Lana interact that seem like they should be a disqualification, but after a distraction for Shayna she’s able to kick Dana into Lana and lock in a Kirafuta Clutch for the win.

Nia Jax is insulted that Lana tried to interfere in her match and challenges her to a match later tonight where she threatens to end Lana’s career.

Unfortunately, R Truth thought he was meeting Waterboy Bobby Boucher. It’s a non-title match so R Truth offers to let himself be pinned. He’s feinting and tries to put up a fight but it ends with a Spear and Hurt Lock on Truth. After the match Drew Gulak comes out to try to win the 24/7 Championship but Lashley puts him in a Hurt Lock before dumping his limp body on Truth so Gulak wins the 24/7 Championship.

AJ Styles comes out with Jordan Omogbehin and declares himself Team Captain of Raw. He introduces Sheamus and Keith Lee who are both focused on Survivor Series victories. Braun Strowman comes out demanding a spot on Team Raw, and since Sheamus and Keith Lee both take exception to this. AJ Suggests that Braun face Lee and Sheamus in a Triple Threat and be given a spot on the team if he wins.

NOW…@AJStylesOrg is the self-proclaimed CAPTAIN of Team #WWERaw in the Men's Elimination Match at #SurvivorSeries! pic.twitter.com/1iqEhr2gsO

The match is an all-out brawl. There is a scary moment when Lee dives to the outside and the back of his head hits the apron. Strowman is able to drag both competitors over to the announce desk, but both manage to keep him from putting them through the desk. The match then goes between Keith and Sheamus battling each other before Strowman tackles both through the barrier.

The match continues to be big beefy men bumping beef. Lee especially is booked as a star monster though as Lee is about to hit a Spirit Bomb he is given a Brogue Kick from Sheamus but Strowman gives Sheamus a Powerslam to win and advance to Team Raw.

After the match AJ attempts to broker peace between all the big men before beating them down and clearing the ring to make himself dominant.

Can't Team #WWERaw just get along before the Men's Elimination Match at #SurvivorSeries?!

As @BraunStrowman qualifies, it's complete chaos between these red brand teammates! pic.twitter.com/pdjk4VnRUG

Alexa is helping Bray host, and when Abby swears Alexa asks her to put money into the Swear Jar because of talking about Randy Orton. Bray is clearly still traumatized by the previous arson of Randy Orton. Meanwhile Alexa shows off part of her new look, which results in a Bray swear.

Before Lana enters the ring Shayna removies everything from the Announce Desk. Once the match begins it is pure brutalization by Nia, who refuses to pin Lana and continuously punishes her. Nia finally hits a Samoan Drop for the pin and win, and after Shayna ejects Lana from the ring Nia beats down Lana and puts her through the announce desk for a 7th time.

The New Day vs The Hurt Business

Backstage R Truth runs into The Hurt Business, who have signed his water bottle, though he runs away.

In the VIP Lounge, Bobby Lashley mentions his battle coming up with Sami Zayn at Survivor Series. MVP says that since they took care of Retribution they’d like their payment in the form of a Tag Team Championship match against The New Day.

The New Day comes out and Xavier Woods and Kofi both put over all members of The Hurt Business for their skill and Longevity. All except Cedric who has yet to craft his legacy. The two also trade barbs that get personal.

The match begins with Shelton Benjamin and Cedric Alexander representing The Hurt Business. MVP is on commentary and providing history lessons about the competitors as well. The match is outstanding as these performers are all incredibly athletic, with The Hurt Business getting a slight advantage due to intensity.

Nikki Cross finds Alexa Bliss backstage staring off into the distance and tries to confront her about not being accessible and being under the control of the Fiend. When Nikki Cross tries to make Alexa face her she is scared off by Alexa’s new eyes.

Earlier in the day Ricochet confronted Tucker about his betrayal of Otis and challenged him to a match. Ricochet beats Tucker with ease and suddenly Ali shows up followed by Retribution who attack both Tucker and Ricochet. The beatdown ends with Retribution standing dominant over Ricochet.

You're probably wondering how he ended up in this situation with #RETRIBUTION on #WWERaw. pic.twitter.com/soHp4Nq2tM

The Miz/John Morrison vs Drew McIntyre

Prior to the match Drew is approached backstage by Sheamus who asks him to consider joining the Survivor Series team. Drew declares that the only way he’ll be satisfied at Survivor Series is if he has a match against Randy Orton.

Remember when @WWESheamus & @DMcIntyreWWE were on a DOMINANT team at #SurvivorSeries 2009?

The #CelticWarrior would LOVE to have the former #WWEChampion as the fifth member of Team #WWERaw! pic.twitter.com/6ogOOjh0z0

Drew is overpowering Miz and Morrison with ease, allowing them to tag in and attacking each in turn. Mis and Morrison are finally able to team up on the outside to attack McIntyre, letting the numbers game finally overtake him.

Though Miz and Morriosn continue to team against Drew, but Drew gets an opening when he suplexes Morrison while in a Tree of Woe. Impressive moves by Morrison when Drew goes for a pin but JoMo breaks it up with a shooting star press. McIntyre is able to survive a skull crushing Finale as well as dive onto both opponents before putting Miz away with a Claymore for the win.

After the match there’s an RKO out of nowhere and as he holds the title up Fiend Laughter fills the arena as we go off air.