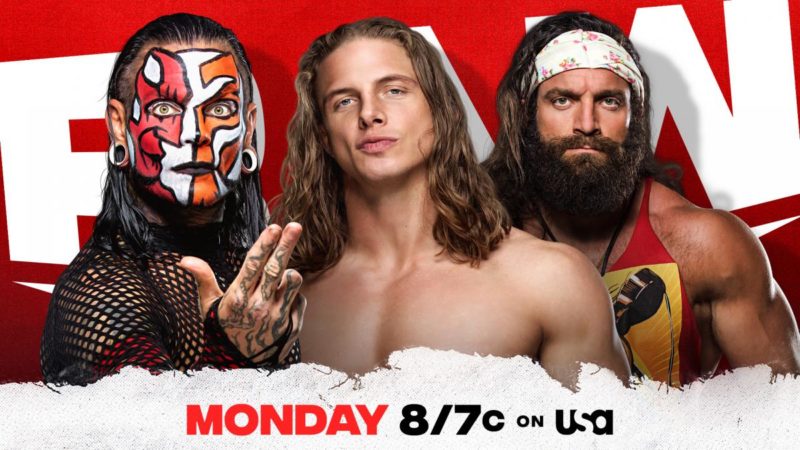 Welcome to Wrestling-Edge.com’s results for WWE Monday Night Raw airing November 09, 2020. On this episode last week’s competitors get another chance at the Survivor Series team.

Miz TV with The New Day

The show opens with MizTV with Miz talking about his match later tonight with Randy Orton, who he’s entitled to cash in on. He also puts over his reality show when Randy Orton comes out and eviscerates both Miz and Morrison. As Orton confronts Miz inviting him to take the title, Miz and Morrison plot to position themselves for Tag Titles.

The New Day come out to face off with them, but Orton lands an RKO and the others attack Woods. During the brawl Drew McIntyre comes down but is left lying with an RKO after being jumped by Miz and Morrison.

Elias vs Jeff Hardy vs Riddle

Elias starts out in-ring cutting a promo about Hardy’s new addiction of hitting him with guitars. He tries to coax Jeff into attacking him, but he doesn’t run out until he actually tries to start a song. The three men are quick to attack as AJ Styles watches backstage with his large associate.

After the match AJ Styles is praising the victory of Riddle but Sheamus comes up to him upset at Riddle being confirmed. AJ decides to call a team meeting as Team Captain, but all members say that He is not their captain.

Drew Gulak approaches The Hurt Business offering his services as 24/7 champion, but he is jumped as soon as they discover his clip-on tie. As he is beaten down and left lying, R-Truth discovers him and pins him for the championship.

As Lana heads out to the ring, she seems to get cold feet and start walking back to the locker room though decides against it. All other women on the team are around with Nia on the outside and Dana and Mandy on commentary. The match is very short with Lana forced to tap out to the Kirafuta Clutch. As Shayna starts to clear off the commentary desk Dana and Mandy jump up to stop the attack.

Unfortunately backstage it seems that Mandy and Dana were acting for the sake of Team Unity and are still upset with Lana for costing them the tag titles last week.

AJ Styles makes his way to the ring to improve morale and cement himself as captain of Team Raw. He introduces the team members one at a time bringing them to the ring. There is infighting among them over feuds as well as AJ’s alleged leadership. AJ emphasizes his wish to unite them against SmackDown and says that he’s already talked with Adam Pearce about having a special Tag Team match with Keith Lee and Riddle teaming against Sheamus and Braun Strowman with AJ Styles as a Special Guest Referee.

The match is full of interactions between the feuds of Riddle/Sheamus as well as KeithLee/Braun. Unfortunately this puts AJ in the crossfire of these brawls. His associate tries to get involved, but when we come back from commercial he’s back out of the ring and AJ is back on his feet.

Teamwork completely breaks down with Lee using Riddle as a weapon on Sheamus and unable to put Braun away. A fight even occurs between Sheamus and Braun as Sheamus tags himself in but Brogue Kicks Braun out of the ring and allows Riddle to get the pin and win.

Nikki Cross finds Alexa Bliss and tries to voice her concern about the Firefly Fun House to her. She forces the choice of her or The Fiend but she chooses him.

MVP announces that next week The Hurt Business gets a chance to head into Survivor Series as the Tag Team Champions. As MVP is running it down, Titus O’Neil confronts them about the disrespect he showed when he tried to join. He also challenges Bobby Lashley to a US Title defense. A ref comes down and MVP taunts Titus before the match begins. Titus gets a hair of offense but in the end it’s Lashley who wins with a Hurt Lock on Titus to retain his championship.

Nia has the entirety of Team Raw on the outside of the ring, but Asuka is out there with no support. When Asuka has Nia in an armbar, Shayna and Lana get into a fight on the apron, causing Asuka to attack them instead. Nia tries for a Samoan Drop but Asuka transitions into an Asuka Lock earning a DQ win when Shayna jumps in to attack Asuka.

After the match there’s a brawl between all members of Team Raw, which ends with Nia once again abusing Lana and putting her through the commentary table again.

Angel Garza continues his trend of promos putting himself over as the lothario that he is.

How many times exactly did the #247Championship just change hands?

Earlier in the night Retribution cut a promo where Ali calls out Ricochet but also Reckoning appears to challenge Asuka to a future title match.

As the match begins Ricochet is far more intense than we’d normally see him. It’s a great match between the two, staying clean but even going out to the apron. Retribution start to close in on Ricochet, but the distraction allows Ali to hit a draping neckbreaker on him as he re-enters the ring. Ali appears to be trying to wear down Ricochet, grounding him where he can. Ricochet proves to continue to be dangerous even while grounded with a massive discus lariat on Ali.

The match continues to be completely amazing, with Ali being fiercer than normal and Ricochet managing to fend off all of Retribution. However Ali is the one who gets the win with a Koji Clutch after after Ricochet misses a Phoenix Splash.

Previously in the show, Sheamus and Drew met up and talked about the good old days of tagging together, and Adam Pearce revealed Orton would defend his title against Drew McIntyre.

As the match goes on, Orton stays inactive on the outside, avoiding any opportunity for his teammates to pin. We have more of the chemistry we know from Miz and Morrison as well as The New Day.

Once McIntyre gets in, he continuously stares down Orton, and drags Morrison into a corner after a Future Shock DDT. Drew pleads with Randy to come in and give everyone a preview of next week, but Orton feints the tag and walks away with his title. As he backs out Morrison tries to roll him up but a flurry of exchanged attacks by all participants minus Orton allows McIntyre to

The Legend will see his way out of this one. #WWERaw @RandyOrton pic.twitter.com/zcLGL1Cpnc