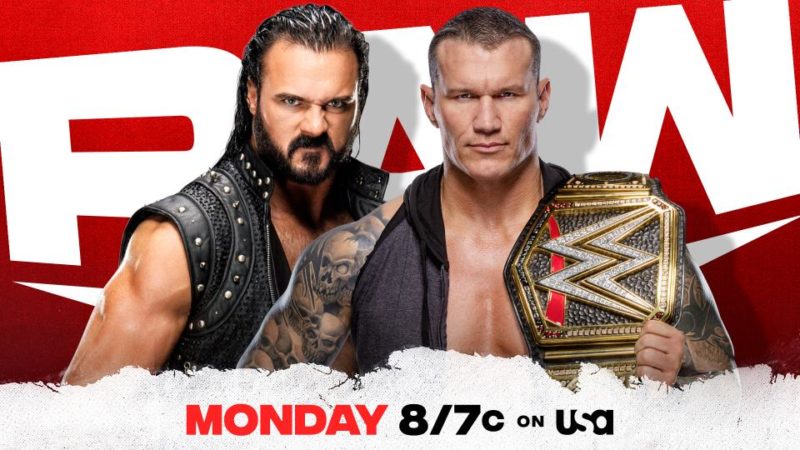 Drew McIntyre starts the show off talking about his love of the WWE Universe as well as his SmackDown visit. He starts to continue about his plans for Randy Orton when Orton shows up on the Titantron. Orton extolls his accolades as the best Wrestler of all time despite his multiple suspensions. Drew McIntyre finishes the sentiment about RKO and declares his path to victory tonight.

Miz and Morrison interrupt Drew’s exit to bring back the possibility that Miz can cash in his Money in the Bank. Miz and Morrison will be ringside for the match tonight and as they critique Drew’s qualities of his championship run they leave the ring with Drew irate.

"The possibilities of change are endless."

Lana pitched this match as a team building exercise, but Nia warns her to not tag in at all this match.

With the match starting Baszler and Jax are ruthless targeting Mandy Rose’s previously injured arm. Asuka is able to hold her own against Shayna and Nia, though is almost tapped out by Shayna. She’s saved by a blind tag from Lana. Lana falls quickly to Asuka and as a reward for her bravery Nia once again puts her through a table.

Backstage the members of Team Raw are bickering, but AJ tries to bring them together with shirts and a match against Retribution. We also discover that Jordan Omogbehin does speak english, though AJ never asked.

Dana Brooke is interviewed backstage about Mandy Rose when a wild Reckoning attacks until driven off by officials.

Bray offers to face The Miz tonight to teach him a lesson in manners. It’s last minute so he has a training montage with his Fun House friends. He tests his Agility, Spelling, and Accuracy which results in yet another death for Ramblin’ Rabbit.

Prior to the match there are dueling promos between The Hurt Business and The New Day, each trying to one-up the other about the upcoming match.

The match between the two teams is excellent. It especially drives home the athleticism and technical prowess of all 4 members of this match. Kofi and Woods land their greatest hits while Cedric gets to show off his cruiserweight moves while Shelton Benjamin gets to take the rare role of the powerhouse of the group.

The Hurt Business has incredible resiliency, especially Cedric Alexander who endures multiple stomps from all members and even nearly overshoots Kofi, landing in the barrier. Kofi fights off both members of The Hurt Business and The New Day get the win with the Day Break which was an absolutely amazing match.

AJ is sitting this out ringside so it’s 4-on-4. Team Raw still has some issues getting along, though Retribution have none of these issues in synergy. This comes into play as Braun clears the ring of his teammates, but due to a Blind Tag by Riddle he is able to get rolled up by Mustafa Ali, giving Retribution the win.

The Miz vs Bray Wyatt

Prior to the match, Nikki Cross is looking for Alexa Bliss. She finds her prior to Miz and Morrison’s mathc and tries to bring her back to reality. Unfortunately for Nikki, the two brawl until Bray comes out for the match which Nikki joins him for.

Bray is deliberate throughout his match with Miz, Bray is able to maintain his upper hand and keep Miz occupied. Morrison tries to get involved but Alexa Bliss tackles him over the railing before Bray pins Miz for the win.

Due to the injury on Mandy Rose and the attack on Dana Brooke, they will be replaced Sunday with Lacey Evans and Peyton Royce. Nia thinks the replacements are the worst idea since Quibi…so timely reference

Drew was given a gift earlier from Sheamus, which is the kilt and tartan kneepads with a claymore. It has plenty of Pyro and a sword, what more is there to love.

Yes, @DMcIntyreWWE is somehow even MORE ready than you imagined for this #WWEChampionship main event! #WWERaw pic.twitter.com/2ZrUQEr3cy

The match starts strong in the ring but when Randy tries to escape Drew chases him down and tosses him in the ring. After a missed Claymore Orton tries to escape again but Adam Pearce comes out to make the official announcement that the match can only end in Pinfall or Submission.

This seems to work in Orton’s advantage as he grabs a chair and begins attacking Drew McIntyre. As the match goes outside the ring Orton drives Drew into the announce desk and starts taunting Drew while setting up a table.

McIntyre begins to get back in gear, and manages to put Randy Orton through the table on the outside. Orton is able to reverse McIntyre’s Claymore into a powerslam and gives him a pair of Draping DDT’s off the announce desk. However when Orton attempts an RKO Drew is able to shove him off and hit a Claymore for the win, earning his second WWE Championship.

You want tables? You GOT TABLES!

Is this the turning point @DMcIntyreWWE needed in this #WWEChampionship Match?! #WWERaw pic.twitter.com/3heaUnpYmp