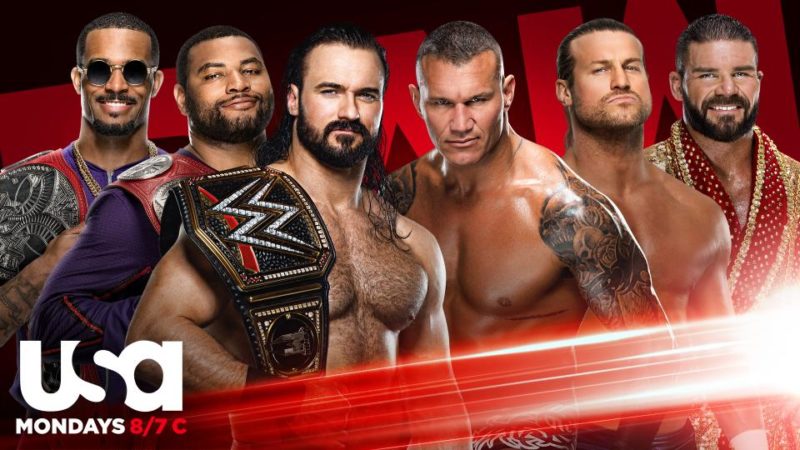 The show opens with Randy Orton in the Legends’ Lounge talking about the aftermath of Clash of Champions. From this room he also describes in great detail his motivation and actions for attacking the legends last week. This is an incredible promo and honestly I can happily listen to Orton talk all night, but he challenges Drew McIntyre to one more match at Hell in a Cell. Drew busts into the room and beats down Orton, though Orton escapes when officials run in to break them apart.

While Natalya and Mandy Rose are fighting in the middle of the ring Zelina goes around to pull Asuka off the ring. Zelina tags herself in after getting scolded by the ref and manages to temporarily lock up Mandy. There’s some excellent teamwork between Lana and Natalya, keeping their momentum up with tags. The heels also are sure to get shots in on the faces ringside when they can. Eventually Asuka gets in with Lana and while she hip thrusts Zelina out of the ring she clears out all 3 competitors. Mandy Rose gives a blind tag and wins the match with a pump knee strike.

Following the match, the heels are in the ring when Nia’s music hits and the Woemn’s Tag Team Champions come down to beat down Lana and Natalya, putting Lana through the table after she saves Natalya from the fate.

R Truth is breaking down his mock draft to Little Jimmy when he sees a referee coming by. The custodian behind him, who he mistakes for Randy Orton, causes Truth to trip and fall, so the custodian pins him and it’s revealed he is new 24/7 Champion Drew Gulak.

Ricochet, Mustafa Ali, and Apollo Crews are talking backstage about the upcoming draft, but MVP comes up and offers to take Apollo into The Hurt Business to build his brand. Ricochet does seem to be considering the offer as MVP leaves.

There's a spot open in The #HurtBusiness tonight.

In the ring, Murphy questions his treatment by Seth Rollins, and demands an apology to Aalyah. Seth is upset by this and gets in Murphy’s face about knowing his place in their relationship threatening to reveal all DMs between the two.

Humberto and Dominik make their way to the ring and start the attack o Murphy and Rollins, using tandem offense to fly. Seth and Murphy get on the offense with Seth in the ring, and when Murphy tries to tag in Seth says he has to wait til Seth tells him to. Despite constant infighting throughout the match it is Murphy that gets the win with a knee to Carillo. After the match Murphy angrily walks away from Rollins

Rollins goes up to Murphy backstage and gets in his face and says he has til 10pm tonight to give him an apology for his insubordinance.

Braun Strowman is backstage irritated that there’s no Raw Underground tonight, but Adam Pearce offers him an exhibition match. As Braun walks away Keith Lee asks him to allow him to be the opponent.

So, @BraunStrowman's looking for an exhibition tonight?

The KO Show with Bray Wyatt

Kevin Owens talks about his SmackDown experience with The Fiend, He also talks about how the dark people like The Fiend and Aleister Black have been attacking him, name dropping The Brood and The Ministry of Darkness. Firefly Funhouse interrupts with a Firefly Funhouse and a poorly performed song about the power of Friendship. KO doesn’t wish to join him in the shenanigans, but Bray warns that Kevin will find out more about the fiend this week on SmackDown.

Since Owens said he won’t wait til SmackDown he goes to find Bray, but he’s attacked from behind by Aleister Black who hits a Black Mass to leave him lying.

Drew McIntyre talks to Charli backstage and guarantees that he will send Randy straight to Hell in their rematch. Hell in a Cell Orton vs McIntyre confirmed.

This is two big men brawling with each other using their mass to cause destructive collisions. Strowman goes to the outside and sends Keith Lee into the steps, but the ref counts to 10 and throws out the match. Strowman protests and sends himself and Keith Lee through the barricade. Keith Lee gets back up as Strowman walks away and attacks Strowman, sending him into the LED Boards before going off the stage.

Drew Gulak wanders backstage when R Truth appears out of a dumpster with a Ref. Though Gulak attempts to escape, he knocks over a trash can that has Tozawa in it. All three end up in the dumpster, but the ref gives the 3 count to R Truth.

MVP talks about the interference by Retribution last week, calling out their opponents. Ricochet hops on the mic as his team comes down the ring and blatantly refuses the offer from The Hurt Business. MVP commands Lashley to punish them, but put special emphasis on Ricochet.

The match starts with Shelton Benjamin keeping Ricochet grounded, not allowing him to use his aerial offense. When Lashley gets in Ricochet finds an opening for offense. As Lashley manhandles Ricochet, MVP taunts him from the outside, but Ricochet shows defiance. Apollo Crews is able to get in fresh and give the two a fight.

After a valiant fight Bobby is able to find a way to get Apollo Crews into the Hurt Lock causing a submission for the win.

Afterward Mustafa Ali confronts MVP and says that he wants all three of them out there tonight as he beats down MVP and makes his way through the rest of The Hurt Business.

Prior to this, Murphy is approached by Aalyah backstage and asks him to not apologize to Seth..

Seth enters the ring and awaits Murphy’s apology. Once Murphy comes down Seth starts listing everything that Rollins has done for the Australian, and claims all he has to do is apologize. He grabs Murphy by the beard and contines to tell him he made him so he can break him. Murphy finally snaps and attacks Seth, taking him out of the ring and to the commentary desk. Rollins tries to equalize with a Kendo Stick but Murphy gets it and attacks Seth with it.

Murphy looks to show mercy to a pleading Seth who immediately grams the kendo stick and hits Murphy so hard with it he breaks it. Rollins goes to get a steel chair instead, but Aalyah is in the ring with Murphy pleading for Rollins to stop the attack. The rest of the Mysterios come out to confront Aalyah as Seth walks away leaving Murphy in the ring beaten.

This is a match finally taking place after the champs weren’t cleared at Night of Champions. Riott Squad is using some interesting offense to try to keep Nia out of the fight. When Shayna is tagged in she does everything shie can to pick apart the arm of Ruby Riott, tossing her nonchalantly to the outside. Nia Jax continues the attack outside the ring whipping Ruby into the corner of the apron.

The champs continue to dominate with Liv Morgan putting up a strong fight. Nia and Shayna seem to be working together well to inflict punishment. When Ruby sets up the Riott Kick Shayna tackles Liv Morgan and though Ruby fights off Nia she is left vulnerable to a knee from Shayna followed by a Kirafuta Clutch for the win.

MVP and Mustafa Ali have a straightforward match with Ali getting in a solid amount of offense to the veteran. A frustrated MVP cues Lashley and Benjamin to get in the ring and attack, but as they surround Ali Retribution’s Logo pops up in the Thunderdome. Ali goes out to confront T-Bar and Slapjack, but turns around and commands them to attack The Hurt Business. As The Hurt Business is left lying, Ali enters the ring and Retribution stands behind him as he holds his hand up and cues the lights off. So I guess Ali is the leader of Retribution?

I’m guessing with their inclusion in this match that puts Dolph and Roode in the Tag Team picture against Street Profits. Montez Ford’s athleticism is a good counter to the viciousness of Randy Orton. Dolph and Roode try to take McIntyre 2-on-1 but McIntyre is able to fight them off, ragdolling Dolph Ziggler. The fight becomes 3-on-1 against Drew, but Dawkins saves him with a blind tag. Dawkins is able to counter an RKO and hit a spinebuster, setting up Ford for a Frog Splash. Ziggler and Roode prevent the pin, but Drew gets in and delivers a Claymore to Ziggler out of the ring as well as Roode, but this allows Orton to hit an RKO to make the pin on the champion.

The tension in this #6ManTag Match has already exploded!