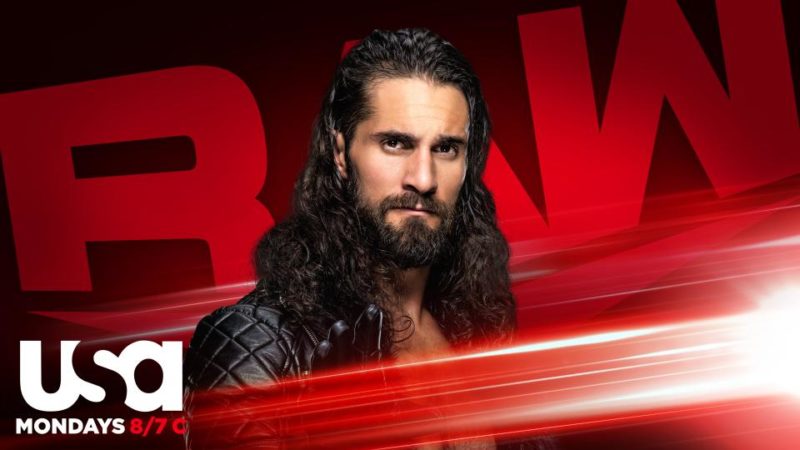 Welcome to your Wrestling-Edge results for WWE Monday Night Raw. The draft continues tonight with a new set of superstars on the trading block.

Clash with the Champion

Randy Orton comes out to address his championship match with Drew McIntyre. He does mention tonight’s draft, but also flaunts his defeat of Drew last week via Pinfall.

Drew McIntyre comes out and says that he will defeat Orton for everybody he’s attacked. He also states that he said he’d beat down Orton the next time they were in the same building and proceeds to do just that. Orton rolls out of the ring and escapes after a light beating.

You just KNEW chaos was gonna ensue between these two.

The first pick is “The Fiend” Bray Wyatt, so hopefully he comes with Firefly Funhouse. Smackdown retains Bayley and her championship. Raw keeps Randy Orton while Smackdown gets the Raw Tag Team Champions The Street Profits. The final Raw pick is Charlotte Flair.

Black is immediately on the attack and both men try to end it quickly with a Black Mass and Stunner attempt. The battle moves to the outside and escalates including Ownes getting thrown to the announce table.

You wanted the TABLES? YOU GOT THE TABLES!

Black brings multiple chairs into the ring, using them to harden the landings for Kevin Owens. KO is able to get ahold of a chair and use it to swing momentum in his direction and even somehow survives a meteora through the setup chairs. Owens is able to dodge a Black Mass causing Black to kick the turnbuckle. This allows him to hit a Stunner and powerbomb Black through a table for the win.

Raw starts the second round by drafting Braun Strowman while Smackdown keeps Daniel Bryan. Raw gets new talent in Matt Riddle while Kevin Owens moves to Smackdown. And the final move of this round Jeff hardy goes to Raw.

This is the first showing of Miz on Raw since being drafted, and this apparently continues the Otis storyline. Despite being out there as Tag partners, Mandy and Dana are competing in a dual brand Battle Royal for the Raw Women’s Championship.

Lana and Natalya come out upset that they aren’t being interviewed, and words devolve into a brawl in the ring with Natalya and Lana being laid out.

When we come back to the show, there’s a new guest on Miz TV and it’s John Morrison. As they start jaw-jacking Lars Sullivan comes out and attacks the duo with John Morrison ending up being the most manhandled.

Street Profits and The New Day meet with Adam Pearce backstage and since they switched brands, he suggests they exchange titles. After the duo trades their titles they are approached by Robert Roode and Dolph Ziggler who demand a shot at the Raw Tag Team Championships.

Raw’s first pick this round is Retribution, which I guess comes with Ali while Smackdown gets Lars Sullivan. Keith Lee remains on RAW while SmackDown keeps King Corbin, and once again Alexa Bliss is a part of Raw.

Seth lauds his accomplishments and claims that nobody will be able to fill his shoes and take over as the face of Monday Night. We get Jeff Hardy coming out to interrupt and AJ Styles also comes out as the 3 get into a scuffle Jeff announces a “Triple Threat Tag Team match”…which must be a botch since there’s nobody out there to partner.

I love that commentary brings up Samoa Joe’s feuds with the competitors in the ring. A lot of action in this match, with a majority of the action being between Styles and Hardy, but Seth takes the opportunity to attack both opponents.

The match is very good but when AJ gets Seth in a Calf Crusher he’s able to get out of the way of a Swanton Bomb which lands on Seth though he kicks out.  AJ tries to give a Styles Clash to Hardy, but it’s reversed into a Twist of Fate. When Hardy goes to Pin Styles, he’s suddenly hit with a guitar from behind, which means ELIAS IS BACK! Styles takes the opportunity to Pin Hardy for the win

Raw starts this round by selecting Elias while Sami Zayn remains on Smackdown with his Intercontinental Championship. Lacey Evans moves to Raw while Shinsuke Nakamura and Cesaro remain on Smackdown together. Raw’s final selection this round is Sheamus.

This match is a result of the MizTV conflict, but I’m curious if this means they now don’t get a shot at the Raw Women’s Championship. It’s not a very long match but Dana Brooke and Mandy Rose get the pin after Mandy delivers a knee and Dana gives a senton from Mandy’s Shoulders for the win.

After the match, Natalya says she’s done and can’t take Lana anymore, so it looks like they have split.

Ricochet approaches The Hurt Business backstage and makes a deal that they will squash beef if he can beat Cedric tonight but if he loses he will join the Hurt Business.

Zelina Vega is on commentary for this match between her two former clients. Garza’s leg is rapped from his injury last month. These two have excellent chemistry and the match ends after a shocking Wing Clipper from Garza allows him to pin Andrade. Zelina enters the ring to check on Andrade and the lights go out. When the lights come up they’re red and Alexa Bliss is doing the arch in the corner of the ring, as they turn around The Fiend is also in the ring with them. This leads to a dual Sister Abigail from Alexa and The Fiend.

Raw starts this round with Nikki Cross while the team of Robert Roode and Dolph Ziggler head to Smackdown. The 24/7 Champ stays on Raw with R Truth and Apollo Crews heads back to Smackdown. Raw’s final pick is Raw Underground’s Dabba-Kato.

Woods and Ziggler start with some amateur graps, setting a solid opening foundation. Kofi is able to survive a Fame-asser from Ziggler and Roode also makes very deliberate attacks. The New Day remains resilient staving off the attacks of both opponents but a Midnight Hour from the Champs allows Kofi to get the pin and retain their titles.

Elias is interviewed backstage and says he’s back and fighting Jeff due to getting hit with a car months ago. He also announces that his new album “Universal Truth” comes out October 26.

WOW.@IAmEliasWWE's new album #UniversalTruth will be available to the world on October 26 … but NEXT WEEK, he's got a concert in mind on #WWERaw just for @JEFFHARDYBRAND! pic.twitter.com/5HHCiduhDd

The aggression ignites immediately as the two former friends go against each other. Hurt Business is ringside and Cedric focuses on keeping Ricochet on the ground. It’s an exciting contest and after Ricochet kicks out of a Michinoku Driver MVP gets a chair and hands it to Ricochet.

He will have to if @CedricAlexander wins this match! pic.twitter.com/gHDcDWeLSb

The ref’s back is turned and Ricochet decides to pull an Eddie and frame Cedric for using a chair, getting the win via DQ.

Titus O’Neil gets to remain on Raw, while Carmella will be returning on SmackDown. Peyton Royce is officially on Raw in a singles capacity while Aleister Black goes to SmackDown. The final pick for Raw is Akira Tozawa.

This is cross-branded and Asuka is on commentary for this. The first eliminations are Tamina and Billie Kay both taken out by Nia Jax. Mandy Rose and Nia Jaxx are both taken out by Nia when they try to attack Shayna and the entire field take out Nia Jax when Shayna goes over and tips her out. After Nia puts Lana through the announce table again they cut to Orton and McIntyre fighting backstage.

The final four are Ruby Riott, Liv Morgan, Natalya, and Lacy Evans. The Riott Squadd gets eliminated simultaneously leaving Nattie to fight Lacy. They cut to backstage and Asuka is watching on a big screen having left commentary. Lacy and Natalya fight on the Apron, both hanging on to stay off the ground. Lacy Evans is whipped into the ringpost and as Natalya celebrates her win Lana comes out of nowhere and tosses her out of the ring since she was never eliminated.

As Lana starts celebrating her win her moment is cut off by Drew McIntyre and Randy Orton continuing their brawl ringside until officials come and split them.