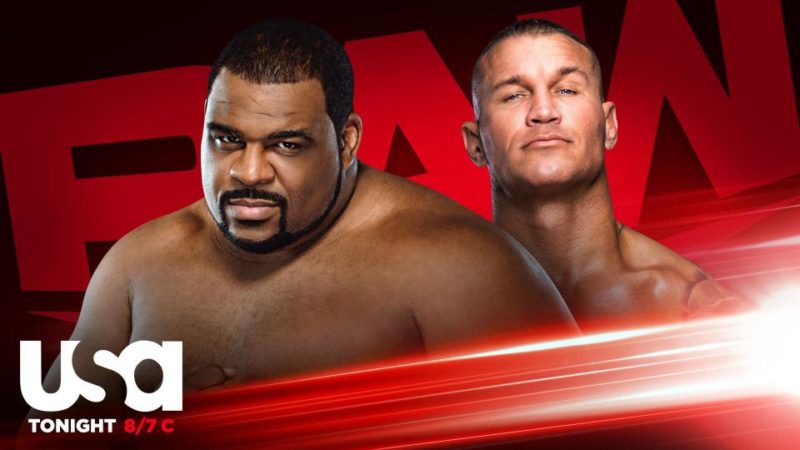 The Champ is Here

Randy Orton is out to address his match tonight with Keith Lee as well as his assault on Drew McIntyre. However, sirens hit and it isn’t the Big Bad Booty Daddy, it’s Drew McIntyre.  Drew comes out and delivers a Claymore to Randy Orton before leaving triumphant.

In order to keep the peace, Adam Pearce asks Drew to leave the arena.

Once again Raw has this feud with The Hurt Business.  As Cedric Alexander makes his way to the ring, The Hurt Business attacks him from behind.  The match is more of what we have seen in previous weeks, however suddenly Cedric attacks Ricochet and delivers a Lumbar Check to Apollo Crews resulting in a win for The Hurt Business. Though he doesn’t join in the celebration it seems Cedric has finally come around to MVP’s advice.

Another match that feels like a repeat of previous weeks, however this match quickly turns into a 2-on-1 Handicap Match after Angel Garza argues with Zelina and abandons the duo. Andrade quickly gets pinned by Street Profits and as Angel Garza leaves, Cesaro’s music hits followed by Shinsuke’s. They mention the Brand to Brand invitational, which hasn’t been mentioned in months.

A Clash of Champions

Cesaro and Shinsuke mention that Street Profits are the longest reigning Raw Tag Team Champions, though they aren’t taken seriously. So there will be a champion vs champion match next week on Raw between the two.

CHAMPS vs. CHAMPS next week! pic.twitter.com/iOu2Zx31qv

R Truth is at a restaurant getting ready to enjoy cookies with his 24/7 title when Ninjas suddenly show up. Luckily he is able to use the cart as a weapon to knock over Tozawa and his ninja crew, escaping with his title.

The two start off somewhat catty, but then the match becomes a series of reversals as both women know each other so well.It’s a short match and Peyton Royce gets the win with her elevated neckbreaker.

Rey, Dominik, Angie, and Aaliyah Mysterio make their way to the ring to interview with Charli. They are interrupted by Murphy who blames Dominik for falling out of grace with Seth Rollins, and challenges Dominik to a Street Fight tonight which he quickly accepts.

Lana and Natalya appear to have great chemistry of the tag team, with each elevating a weaker spot in the other. That isn’t enough to overcome the champ and number one contender though as there is a little friction between the two but Asuka still wins with the Asuka Lock.

Backstage Cedric is with The Hurt Business getting ready for the show, but Shelton clarifies to Cedric that if this is some sort of game, he will find out.

On the VIP Lounge, Apollo is introduced as the newest member of The Hurt Business and as Apollo airs his grievances The Viking Raiders come out with Ricochet and Apollo to battle.The match that follows is great considering how many of these men worked earlier in the night. There is also great storytelling with the added drama of the betrayal of Ricochet by Cedric.Cedric Alexander wins with a Michinoku Driver on Ricochet after a missed 630, but it does appear on replay that Ricochet CLEARLY kicked out on 2. Officials are also ringside checking on Ivar after his dive, he may actually be hurt.

As Shane is talking to the bouncer outside of Raw Underground, Kevin Owens comes up and talks to him, letting him know that he is still in fact still a jackass.

This is the thrid time we had this match on TV this week, but since Drew McIntyre has had trouble leaving the building tonight, I’m sure some shenanigans will occur later this match. Great Spot where Randy hits the RKO, but Keith Lee is able to keep himself upright and prevent Orton from completing the move. The match is a battle but eventually Keith does git hit with the RKO when Orton gets hit with a Claymore out of nowhere. The match is a DQ, and we continue the story of Orton and McIntyre.

Immediately after @RandyOrton took down @RealKeithLee with an RKO, @DMcIntyreWWE BLASTED #TheViper with the second CLAYMORE tonight on #WWERaw! pic.twitter.com/nQ19mBTGNh

Black is already in battle, winning easily when Kevin Owens joins the fray. The two have a scrap that ends with both of them outside of the ring, seemingly a draw.

This is one of two handicap matches tonight, the Riott Squad taking on each of the Tag Team Champions individually. The Riott Squadd has outstanding chemistry and are able to pull out a surprise victory on Shayna after a distraction allows Liv to victory roll the tag team champion. Nia is quite amused until Shayna reminds her that she’s next.

Black and Owns are still fighting backstage, with neither man having a clear advantage over the other.

The Riott Squad continues their tandem specialty while Nia shows off her strength. The match is interrupted by a surprise appearance by retribution with the lights going out and them cutting a promo in the dark.

#RETRIBUTION just took over #WWERaw with a powerful message! pic.twitter.com/lNIXSkxm0y

The Fight between Aleister Black and Kevin Owens continues, but Dabba Kato suddenly gets himself involved in the brawl.

While walking backstage Drew attacks Randy near the interview area, leaving him lying and giving him a Claymore so he leaves in the back of an ambulance.

Third time's just as much of a charm.

The entire Mysterio family comes down, but Rey and Aliyah both are also carrying Kendo sticks. The match immediately goes to the outside with Murphy unloading a brutal assault on the young Mysterio. Dominik gains control of Murphy sending him all around the outside and even diving onto him within the Thunderdome crowd.

Back from break, Aliyah and Rey are on standby with the kendo sticks, but letting Dominik fight his battle. Murphy is able to pull out some weapons and use them effectively. When Murphy ties him up in the ropes, Dominik is able to avoid getting hit with the kendo stick and as Rey disarms Murphy allowing the girls to untie Dominik before he hits an amazing sunset bomb. They tie up Murphy and the entire family wails on Murphy with kendo sticks, forcing him to submit. As the ref ends the match and unties Murphy, the family continues with kendo sticks as it goes off the air.

The Mysterio family is going to TOWN on @WWE_Murphy, so much so that he just QUIT the match! #WWERaw @35_Dominik @reymysterio pic.twitter.com/9W4907H40J