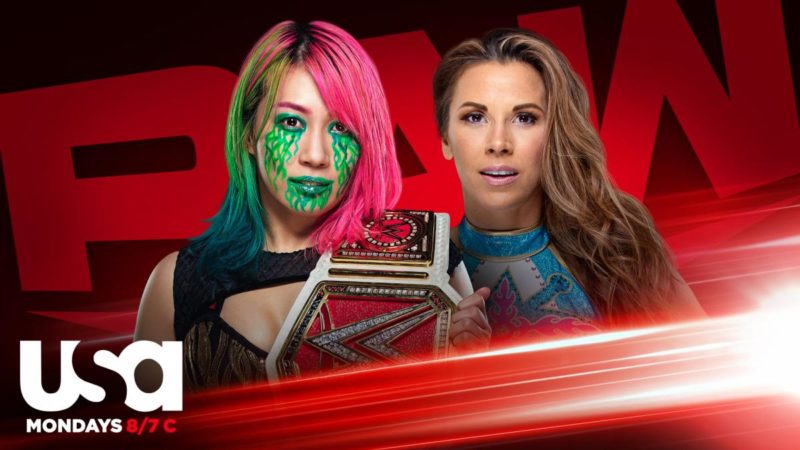 Welcome to Wrestling Edge for WWE Monday Night Raw results, where Raw is “In Your Face.”

Small programming note, it looks like Dolph Ziggler is in Samoa Joe’s spot tonight on commentary.

Drew McIntyre is in the ring addressing the WWE Universe about his actions against Randy Orton and his own medical update. He proposes their match at Clash of Champions be an Ambulance Match since they’ve both left Raw in one recently. Bad Photoshop is back with the victims of the Claymore, but Adam Pearce comes out interrupting with an announcement. If Keith Lee defeats Drew tonight, then he faces Drew at Clash of Champions if Randy is unable to be cleared.

Keith Lee comes out and shakes hands with Drew in the middle of the ring as they head into tonight.

What a tense moment on #WWERaw!

It doesn’t appear that the titles are on the line in this match.  Lots of action in the beginning with a great spot that sees Montez flip over the rope but get caught by Shinsuke/Cesaro before getting slammed. This might be the best pure tag match that Street Profits have been part of so far, with Shinsuke and Cesaro getting straight to business. In a surprise victory, Angelo Dawkins gets the win for the team via Frog Splash following a blind tag.

Absolutely a fun match and did a good amount to legitimize Street Profits as a top tier tag team.

Angel Garza is backstage flirting with Lana as she laments about Natalya not getting a title shot. He is confronted by Zelina and Andrade who want answers to his abandoning them last week. As Angel defers blame to Andrade, Zelina gives up on the pairing and walks away as the two brawl.

Cedric Alexander comes out with the Hurt Business, though he is the only one in gear opposed to a suit. Though MVP starts off the promo, Cedric quickly takes over and explains why he joined The Hurt Business. Apollo and Ricochet interrupt mics in hand and while they are clearly upset by Cedric’s claims, they are ready to avenge his betrayal.

The match begins with a brawl between the two, quickly heading to the outside as the remainder of The Hurt Business brawl with Apollo. Erik of the Viking Raiders comes out to fight Lashley, and apparently the two will be in action tonight even though they brawl to the back.

The action returns to the ring with Ricochet and Cedric, with Cedric getting the win after a Lumbar Check. Afterward, Retribution interrupts the celebration to cut a promo about their grievances with the company.

MVP approaches Adam Pearce backstage and offer to take over security against Retribution for an appropriate fee.

Prior to the match Mickie is interviewed backstage and acknowledges that this may be her last chance to obtain the championship. Exudes confidence about herself, and her abilities, and this is appropriate as her return to WWE was an appearance in NXT to face Asuka for the NXT Women’s Championship.

The match is grounded at technical, with the two women feeling each other out as it begins.

The resiliency of @WWEAsuka & @MickieJames is on full display in this #WWERaw #WomensTitle encounter! pic.twitter.com/t272BkrmU3

Mickie does a great job of counter-wrestling, but takes a little too long getting to the top rope when she has the advantage. Despite this she does get a near-fall with a leaping senton. The match continues with fantastic back and forth action, but it is marred by a confusing finish with the ref stopping the match with no obvious reason why.

After the match Zelina comes down and says she’s been thinking about what she should do after leaving her stable, and decides that she is ready for the Raw Women’s Championship. To put emphasis on the challenge, Zelina slaps Asuka before escaping.

MVP joins commentary for this match, taking the position that was occupied by Dolph Ziggler. Erik starts the match on the offensive but Bobby Lashley is quickly able to turn the tide in his favor. After a brief match Erik is forced to tap out to The Hurt Lock.

Prior to the match Murphy goes to the locker room to see Seth Rollins. Rollins says that he is ready to forgive Murphy and prepares him for his role in tonight’s match. Turns out that role is staying put as Seth repeatedly slaps Murphy with rather loud force.

They Mysterios join Dominik ringside and as the match begins Murphy delivers a kendo stick to Rollins, allowing him to get the early edge. Rollins continues to taunt the Mysterios and wisely Dominik is trying to escape opposed to outfighting Seth. Rey pays back the favor and tosses Dominik a Kendo stick as well which allows him to briefly better his position.

When Dominik tries to escape afterward Seth follows him, but both brawl on the side of the cage and get crotched on the top rope. Rey tries to help Dominik crawl out of the cage door, but Murphy attacks him and when Murphy slams the door he accidentally stops Rollins from escaping believing him to be Dominik. Dominik gets a few escape attempts, even knocking Murphy off the side of the cage, but Rollins is able to grab him and superplex him back into the ring.

Seth is able to get the win after a pair of Curb Stomps, though Dominik put up a strong fight. As he exits the cage he confronts Buddy once again, throwing him into the barrier, cage, and cage door. To be fair, he is rightfully upset about getting the door slammed in his face.

We discover where Dolph Ziggler went as they cut to Raw Underground and Dolph is in the middle of a match. Dolph gets a quick submission and next faces Riddick Moss. The two brawl it out until a surprise Braun Strowman appears, clearing both out of the ring and giving Dolph an extra slam to put him away.

Titus is entering when we return, but back in the ring Braun is getting dominant wins. Titus is able to get a surprise double leg takedown on Braun but Braun puts Titus to sleep with a front facelock.

There was a great promo by KO earlier in the night discussing the several reasons Aleister Black may be upset with him, and Black was around the corner listening to every word.

Kevin Owens comes out for the match but as he enters the ring Aleister Black attacks from behind. The match is underway when we come back from break and Black appears to target the knee of Owens.

Kevin Owens pulls out the victory with a stunner to win the match, although he does nurse his knee outside the ring.

Nia Jax and Shayna Baszler are on commentary for this match since Riott Squad are challenging at Clash of Champions. The match is very short and has both members of the Riott Squad dominating Lana.

After the match, the champs toss Natalya out the ring and attack Lana, sending her through the announce table.

Continuing Raw Underground, Braun seems to be going strong an hour later. Braun clears out moss and Ziggler again, and it looks like next week Braun is going to face Dabba Kato.

Both Keith Lee and Drew have had rising tensions through the night, leading to several brawls backstage. Finally Adam Pearce is forced to threaten to cancel their match and vacate Drew’s championship in order to get them to stop fighting.

The match has instant aggression with both men on the attack pulling no punches. This match is an outstanding display for both big men as they battle. This is just big beefy man slapping beef until Retribution enters the Thunderdome in large numbers, beating down both competitors.

After the beatdown, The Hurt Business come out fully suited to face off with Retribution. The four men take off their jackets and fight the group, a tangled mess that is dove upon by Drew and Keith laying out all combatants as the show ends.