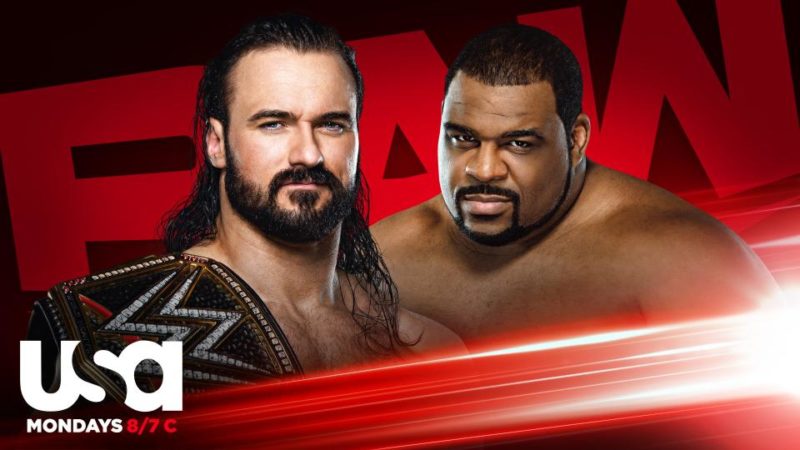 Good Evening, Wrestling-Edge! Do you remember the 21st night of September? We do because WWE is once again presenting us with Monday Night Raw.

Apparently the members of Retribution have been given contracts by WWE, and use their first night to give an opening promo about their dissatisfaction with WWE brass. The Hurt business come down, take off their suit jackets, and charge the ring clearing the group. MVP and Lashley then challenge Retribution to a match.

Other Retribution mooks suddenly surround the ring and attack The Hurt Business. As we go to break Lashley is left lying by a double uranage.

Rey is backstage with Angie and Aalyah, hyping up Dominik’s chances at Tag Team Gold. It’s also revealed that Jerry “The King” Lawler is on commentary in Samoa Joe’s place.

This is a number one contendership match under triple threat tag rules. Humberto and Murphy start the match with some basic chain while Andrade just chills outside of the ring til he gets a chance to attack Humberto. Garza and Andrade are working well together despite a lack of Zelina Vega. Humberto and Dominik also show skill in working tandem.

Seth Rollins picks up his jacket and leaves the ring casually, abandoning Murphy saying he has a lot on his mind. Garza and Andrade win with a Wing Clipper on Murphy with Humberto and Dominik nowhere nearby. Andrade and Garza will be headed to Clash of Champions.

They bring up the fact that Shane should be fired due to the end of their feud, a nice lampshade hanging. McMahon brings up Dabba-Kato who is to face Braun Strowman later tonight, and has him appear on the show.

Kevin Owens steps up to Dabba-Kato and gives him an ominous warning as he also brings out Braun. While Kevin is distracted by the two, Aleister Black comes out and attacks KO, pulling him into the ringpost.

Retribution continues attacking random superstars backstage, this time Humberto Carilllo. No idea why their contracts would allow them to do that.

This is a rematch of last week’s opportunity Keith has to possibly take Orton’s spot in the Clash of Champions match. The two have a very balanced grapple, though when they go to the outside Drew slams Keith into the table which doesn’t give way at all.

McIntyre gets to show off a bit of agility when he uses a Rana to escape a Spirit Bomb by Keith Lee. Lee continues to get close to putting McIntyre away with attacks utilizing his strength, but McIntyre endures. The match ends with Randy Orton hitting McIntyre with a steel chair out of nowhere. After the DQ Orton continues to drive the chair into Drew’s jaw.

Coming back from break Randy Orton is cutting a promo on the ambulance match, condemning the WWE Universe. He also describes in detail his experience leaving in an ambulance a few weeks ago. Personal Note, I could listen to Randy Orton speak for 3 hours straight and be enthralled.

A fired-up @RandyOrton is READY to face @DMcIntyreWWE in an #AmbulanceMatch at #WWEClash of Champions THIS SUNDAY for the #WWEChampionship!#WWERaw pic.twitter.com/HrfM44973M

Asuka is backstage being interviewed when Billie Kay interrupts and complains about Asuka offering anyone a Raw Women’s Championship match. Peyton Royce then interrupts and usurps Billie’s challenge, being the one to take on Asuka tonight.

The winner of this match will determine Asuka’s challenger at Clash of Champions. This is also a chance for Zelina to show her singles prowess against a veteran of the division.  It’s a pretty even match but Zelina Vega gets the win over Mickie and will challenge for the Raw Women’s Championship on the Kickoff show.

Bianca BelAir gets a promo package, showing her outdoing a random guy at the WWE performance center in every lift.

Tozawa and a random ninja referee are waiting in the ocean for R Truth, but when Truth arrives at the beach he discovers a shark. Returning later to retrieve his title, he discovers Tozawa has been devoured but his title is safe.

.@RonKillings has to watch out for those SHARK BITES on the beach!

Little Jimmy and the #247Championship have been brought to safety…phew!#WWERaw pic.twitter.com/wyYVWY1rYI

MVP and Cedric cut a promo about the motivation for the upcoming match, with Cedric accusing Apollo of using him for a championship opportunity. Apollo returns with putting Lashley on notice about their Clash of Champions match this Sunday.

The match opens with a swift pace, MVP acting in the role of manager actively. Both superstars are quite agile and able to pull quick attacks on one-another. But when Ricochet inadvertently distracts Cedric Apollo is able to get the roll-up win. Following the Match the rest of The Hurt Business come out and leave both Apollo and Ricochet lying.

Dolph Ziggler is taking on Arturo Ruas, and Ruas is showing off his capoeira skills as well as some amateur wrestling ability that is balanced. Ruas is able to take advantage in the realm of grappling, but a few well placed strikes open up the sleeper for Dolph. Following an escape both men continue to battle in probably the best  showing Raw Underground has had so far until Ruas is put to sleep.

Braun is interviewed in the post-match and promises new interviewer Briana Brandy that he will give Dabba-Kato hands.

Seth Rollins promises to reveal something about the Mysterio Family, saying he was inspired by WWE.com photos. He invites the Mysterios out for the revelation and all of them accept the invitation. Seth has apparently done a DNA test which are in an envelope. Apparently he missed SmackDown during 2005 including SummerSlam.

Seth then implies that Aalyah may not be his daughter, using her consoling Murphy as evidence. Rey then accidentally turns on the misogyny saying that Aalyah was naive and knows nothing of their world. Seth then seems to go into PSA mode addressing the WWE Universe about their families.

What is going through the mind of the #MondayNightMessiah?!#WWERaw pic.twitter.com/Bb5x9uRNMb

Riott Squad is on commentary and Natalya/Lana get a jobber entrance. Lana has some pink and black gear to match Natalya, but it isn’t enough as Shayna very quickly ends the match with a Kirafuta Clutch.

After the match, the champs attack The Riott Squad ringside, and when they escape Nia takes Lana and once again puts her through a table.

Rey is backstage trying to defuse the situation with Aalyah who is still rightfully upset about being called a naïve 19-year old.

Riddick Moss and Erik are fighting in the ring and Erik seems to have the advantage until a strike from Moss knocks out Erik and allows him to get the win. After the match Dabba-Kato finally gets to cut a promo and does a solid job being intimidating.

Peyton puts up a solid offense against Asuka, and Billie is on the sidelines for support. Shortly into the match, though Zelina Vega interferes and attacks Asuka, causing a DQ.

Murphy runs into Aalyah backstage and apologizes for any undue stress caused to the Mysterio family.

It is a bit uncomfortable if this is a romance angle, since Aalyah is 19 and Murphy is 32.

Dabba and Braun are locking horns, no real advantage either way. The brawl continues outside the ring with extras being used as weapons as well. Using strikes Braun is able to get the win over Dabba-Kato.

Retribution vs The Hurt Business

Apparently “Slapjack, T-Bar, and Mace” are representing Retribution in this match against the non-MVP members of The Hurt Business.

SLAPJACK. T-BAR. MACE. #RETRIBUTION is in action for the first time ever against The #HurtBusiness NEXT on #WWERaw! pic.twitter.com/a4a6GnNUK5

Hurt Business is being easily manhandled by Retribution, who seem to have a size advantage on 2 of the superstars. Only Lashley seems to be able to overpower them.

The match is disqualified after a non-legal member makes contact with the legal man, and the entirety of the mooks in retribution come out to brawl. It  becomes a full melee as Drew McIntyre leads the locker room out to fight Retribution. Randy Orton comes out and RKO’s Drew out of nowhere.

As the #WWERaw locker room brawled with #RETRIBUTION, @RandyOrton struck @DMcIntyreWWE with a vicious RKO before their #WWEChampionship #AmbulanceMatch THIS SUNDAY at #WWEClash of Champions! pic.twitter.com/HXBSuVldfR