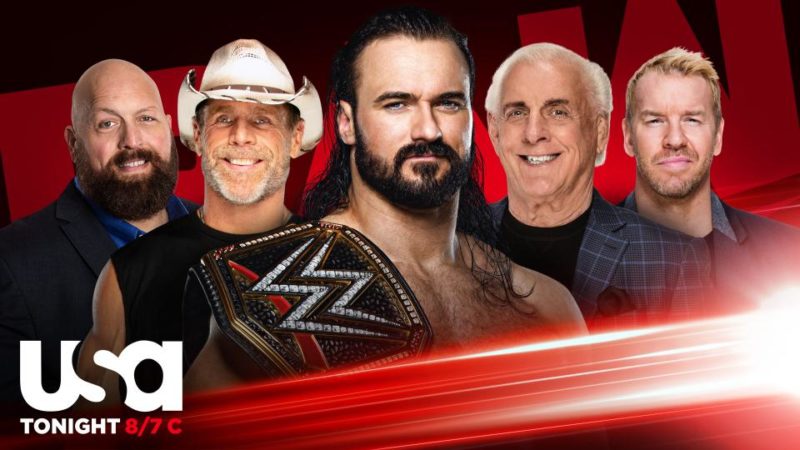 Welcome to your WWE Monday Night Raw results on Wrestling-Edge.com for September 28, 2020. Tonight is set to start with a bang as legends return following Clash of Champions.

The show opens immediately with Ric Flair’s familiar theme. Ric is quickly followed by The Big Show, Christian, and Shawn Michaels before Drew McIntyre joins the fray. None of the men are dressed for competition, and Drew talks about how each of the men in the ring have nurtured his career. They also share the joys of beating Randy Orton, and the legends acted of their own accord opposed to Drew asking.

Randy pops up on the Titantron promising to show Drew what hell truly is. After stating that there’s a price to pay when you cross the Legend Killer, and exits the arena with his bag. Drew makes an Open Challenge to anybody he hasn’t yet faced for the WWE Championship, asking somebody to please step up.

Who wants to step up and challenge @DMcIntyreWWE for the #WWEChampionship TONIGHT on #WWERaw?

Zelina is being interviewed backstage about the upcoming match, though Asuka quickly joins and the two quarrel in Spanish and Japanese.

Zelina starts with an attack on Asuka, but Asuka quickly counters into an arm bar. Vega manages to capture Asuka in a modified octopus stretch, though Asuka escapes by countering into a pin. There is a focus on the arm of Asuka by Zelina as she pursues the champ.

The #WWERaw Women's Championship is on the line @WWEAsuka defends against the ruthless @Zelina_VegaWWE! pic.twitter.com/NO9tzNF1ui

When we come back from break Zelina has Asuka in the ring manipulating her arm. There is almost a repeat of last night’s finish, but Zelina gets to the ropes to escape the Asuka lock. Vega attempts a moonsault but Asuka gets the knees up and turns it into an Asuka Lock for the submission.

After the match, Andrade is in the ring criticizing Zelina for her failures. Andrade mentions Garza got hurt last night because it is Andrade that was holding the team together. Andrade makes an open challenge of his own which is answered by Keith Lee.

"You are NOTHING without me!"

He attempts to out-grapple Keith, but Keith uses his power to counter the fellow former NXT Champion. This is a fantastic match showing off the athleticism as both, with Andrade taking Keith off his legs. Keith Lee though is able to catch Andrade and give him a Spirit Bomb for the win.

R-Truth is playing chess against Little Jimmy, but he is interrupted by a Ninja who brings him a will and blackbelt from Tozawa. When R-Truth mourns Tozawa he is rolled up by Tozawa who is not eaten by a shark. As Tozawa celebrates, he is rolled up by the Ninja who is then revealed to be Drew Gulak. Truth obtains the title once more and runs off, turns out the three will have a triple threat tonight.

Kings Court with the Mysterio Familia

Backstage Murphy is on his phone when Seth Rollins comes up to celebrate the chaos in Clan Mysterio. Seth asks why Murphy is dressed for a match and tells him to go put on his suit, though as he leaves Seth puts Murphy’s phone in his pocket.

Jerry Lawler is in the ring for the segment so he can do his best Maury once he is joined by the Mysterios. Rey refutes the claims against him while Dominik promises to end it with Seth. Jerry pushes the questions about Aalyah and Murphy, but she says that Murphy approached her and nothing is there. Seth pops up on the Titantron to reveal the text messages between Aalyah and Murphy. Aalyah is upset by this and walks to the back.

Murphy confronts Seth and as he grabs Seth Dominik appears out of nowhere and tackles Murphy, the two being broken up by officials.

Lana and Natalya are in the ring demanding the Women’s Tag Team titles. Adam Pearce comes out to say that he can’t strip the women’s champs, but he can give them a match against Mandy and Dana Brooke who are Raw’s two newest roster members.

Dana takes much of the early heat and is easily isolated by Lana and Natalya. When Mandy is tagged in she quickly gets rid of Natalya, but a gut-wrench suplex appears to possibly injure Lana who is dazed. The match quickly ends after a knee from Mandy Rose to Lana. I’m not sure that Lana is completely okay.

Prior to the match Aleister Black cuts a promo about Kevin Owens’ betrayal and emphasizes the cruelty he will face. The cruelty we get is a new super generic theme for Aleister Black. The fight is more of what we have seen with Black and Owens, though Black is no longer one-eyed.

Black has most of the control in this match, but Owens is able to deliver the occasional meaningful counter. The match has an abrupt ending when incidental contact with the referee gets Aleister Black disqualified.

Tozawa and Gulak focus on double-teaming Truth initially, but quickly turn on each other when both want the pin.

Thanks to some offense from his childhood hero John Cena, Truth wins the match after delivering an A.A.

Dominik is emotionally fueled with rage and takes it out on Murphy immediately. He goes after Murphy with pure intensity and the match goes around the ring. As Dominik gets a kendo stick in order to further punish Murphy, Aalyah comes out to beg Dominik to show mercy but when he calls her Naive she slaps him. Dominik gets in the ring, but the distraction allows Murphy to roll him up for the win.

MVP cuts a promo on the insanity of Apollo Crews trying the same thing over and over and over again. He says that though he will step to Lashley once again he will once again get dropped. The opponents come out and start the match, but a couple minutes in the lights glitch and the Retribution logo comes up as the Hurt Business is ready for battle.

When the match comes back it appears Retribution did not show up, but the match has been balanced between all competitors. There is a lot of action combining the strength and technicality of the Hurt Business with the high flying prowess of the babyface team. Ali manages to get the win with the 450 on MVP.

Bianca Belair gets another vignette of her doing exercises, this time Track and Field event. She handicaps herself in each event yet still gets the win.

Dolph initially comes out after having talked to Adam Pearce, but it turns out he was paving the way for Robert Roode to make his return and answer the challenge.

WHAT A GLORIOUS NIGHT!@RealRobertRoode is BACK on #WWERaw to challenge @DMcIntyreWWE for the #WWEChampionship! pic.twitter.com/jb2XIZbhqC

Roode attacks the legs, attempting to get the early edge on Drew, though Drew returns with ruthless aggression. Ziggler also tries to interfere in the match, but Drew catches him before Roode chop blocks him to get back on the offensive. Both men pull out all stops with Drew landing a Future Shock DDT while Roode also lands a Glorious DDT and both kick out. Drew gets the win with a Claymore after an intense match.

They battled at #NXTTakeOver for the #NXTChampionship, but tonight…@RealRobertRoode is the one to challenge @DMcIntyreWWE for the #WWEChampionship! pic.twitter.com/qlZDx5c6ew

After the match, a masked man posing as a Janitor moves toward the “Legends Lounge” with a chair, and it’s revealed to be Randy Orton. The legends have been playing poker throughout the night and are still enjoying themselves when Orton enters. He has what are alleged to be Night Vision goggles and shuts off the light before wrecking the entire room and leaving the legends lying in disarray. He points the refs to the legends room and makes his escape.